Bruce W. Dearstyne is a historian in Albany, New York. The State University of New York Press is publishing a revised version of his book The Spirit of New York: Defining Events in the Empire State’s History and his latest book The Crucible of Public Policy: New York Courts in the Progressive Era  later in 2022. 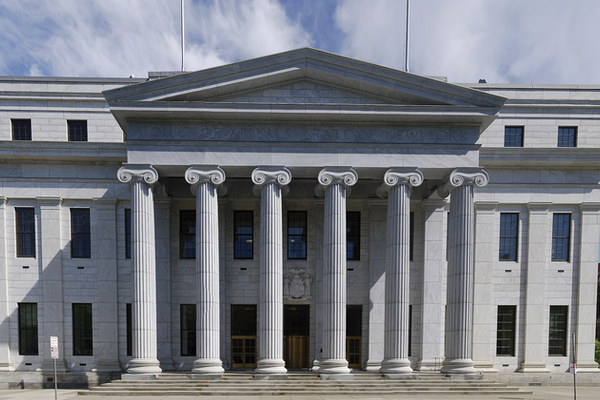 Public concern about recent Supreme Court decisions on abortion, religious rights and other hot button issues is on the rise. Before the court began its current term last fall, a number of its justices took the highly unusual step of pleading for public understanding. Their court is just following the Constitution, the law, and judicial precedent, they say. Angry critics are so far not mollified, calling for expansion of the court’s membership to counteract its alleged conservative biases.

History suggests that attacks on courts peak in times of stress and social change when the courts wrestle with profound, unsettled issues and their decisions have broad ramifications.  The criticisms usually fizzle as courts cautiously tack toward the center and align more closely with the perceived public consensus on key issues.

Historians’ focus on the Supreme Court has obscured the fact that most regulatory and constitutional issues were thrashed out and decided in state rather than federal courts during much of our history, including the progressive period (ca. 1890-1920).  Studying the New York Court of Appeals, the state’s highest court, arguably second in importance only to the U.S. Supreme Court in those days, provides insights into how courts balanced their obligations to the constitution and the need for new laws and regulations. The progressive period was a time of rapid population growth, economic transformation, and unprecedented government policies to regulate business and labor. Courts were panned then for striking down reform laws that judges said violated constitutional guarantees of personal liberty and due process of law.

As my forthcoming book The Crucible of Public Policy: New York Courts in the Progressive Era demonstrates, New York’s high court was more progressive than many of its state counterparts or the U.S. Supreme Court at that time. It was inclined to validate progressive legislation. But it was criticized for what it did not do, i.e., not asserting a common law right to personal privacy in the absence of a specific statutory protection in a 1902 decision,  Roberson v. Rochester Folding Box Company and the Franklin Mills Company. The  high court also took heat for what it did do, e.g., invalidating a law banning night work by women in factories in 1907 (People v. Williams) and a workers’ compensation law in 1911 (Ives v. South Buffalo Railway Company).

Former president (and New York governor) Theodore Roosevelt, seeking the Republican nomination for another term as president in 1912, criticized several courts for their “foolish and iniquitous decisions.” He called the New York workers’ compensation decision “flagrant in its defiance of right and justice” and “shortsighted in its inability to face the changed needs of our civilization.” TR proposed giving voters the right to recall and override state court decisions that declared laws unconstitutional. Some critics went even further, advocating letting voters recall erring judges as well as their decisions. Some newspapers took up the cry: make the courts more responsive to the public.

Attacks by politicians and the media seemed for a while to threaten the Court of Appeals’ independence and authority.  But the criticism  gradually and quietly subsided through evolution and compromise. Some explanations of why this happened may provide insights for courts today:

The media picked up on the Bar Association’s argument that independent courts protected the public interest. The recall proposal went nowhere in New York, though it did advance in some other states. Politicians’ criticism of the courts abated.  A 1915 state constitutional convention passed on an opportunity to rein in the court.  A 1921 legislative commission concluded that the state’s judicial system had “proved reasonably successful and satisfactory.”

The Court of Appeals’ strategies of compromise, forbearance, openness to change and good judgment combined with public support for judicial independence helped preserve the court’s integrity and role as arbiter of constitutionality.  That may be a good precedent for both the Supreme Court and its critics to consider in the months ahead.