Jeffrey Veidlinger is Professor of History and Judaic Studies at the University of Michigan. 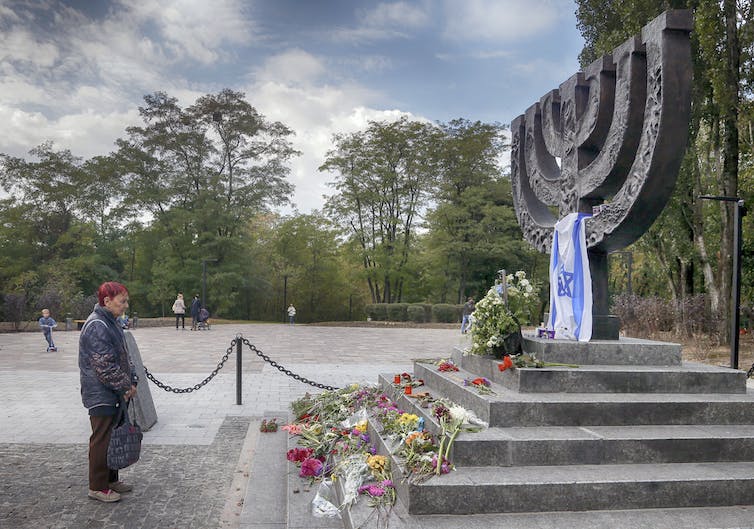 A woman pays homage at the memorial to victims of the 1941 Nazi massacre of Jews in Babi Yar in Kyiv, Ukraine. AP Photo/Efrem Lukatsky

“At Babi Yar no memorials preside.”

Russian poet Yevgeny Yevtushenko wrote that line in a 1961 poem in a reference to to the ravine in the suburbs of Kyiv where, starting on Sept. 29, 1941, and continuing into the following day, over 33,000 Jews were murdered by Nazi forces and their Ukrainian collaborators.

On March 1, 2022, according to Ukrainian President Volodymyr Zelenskyy, a Russian strike against a TV tower in Kyiv killed five people and damaged the nearby site.

“What is the point of saying ‘never again’ for 80 years, if the world stays silent when a bomb drops on the same site of Babyn Yar?” Zelenskyy asked in an anguished tweet, using the Ukrainian variant of the name.

But silence and Babi Yar have a long history together. “All the silence screams,” as Yevtushenko put it in his poem.

As a historian of the Holocaust in Ukraine and the author of the recently published “In the Midst of Civilized Europe: The Pogroms of 1918-1921 and the Onset of the Holocaust,” I have sought to fill in some of these silences by speaking and writing about the atrocities that took place.

On Friday, Sept. 26, 1941, when the Germans occupied Kyiv, announcements printed in Russian, Ukrainian and German began to appear on lampposts and walls around the city ordering all Jews to assemble Monday at 8 a.m. near the site of a Jewish cemetery. That morning, the day before the Jewish holiday of Yom Kippur was to begin, over 33,000 people gathered, mostly women, children and the elderly, as the Soviet government had already mobilized the men capable of fighting into the Red Army.

The multitude was marched under guard through a barbed wire enclosure leading into Babi Yar. Babi Yar – “yar” means ravine in Russian and Ukrainian – is actually a system of ravines, where estuaries that once fed into a tributary of the Dnieper River had left steep troughs and inland fields. It is a scenic site, still crowded on weekends with picnickers and soccer players.

As the assembled Jews entered the ravine on that day in 1941, German SS units, together with Ukrainian prisoners recruited from a nearby prisoner-of-war camp to serve the Nazis as local police, robbed them of their money, possessions and documents. They made the Jews wait in the meadow, from where, behind a mound of earth, they could hear the relentless sound of machine gun fire. Over the next 36 hours, the Germans took small groups of Jews, stripped them naked and murdered them.

The postwar trial records give a sense of what occurred. The victims “were made to lie facedown on the bloodied corpses of victims who had already been shot. If they did not do this willingly, they were beaten and knocked down. Then the gunners climbed over the wobbly mounds toward the victims and shot them in the back of the neck.” According to an operational situation report the Germans sent back to Berlin, they had shot 33,371 Jews. 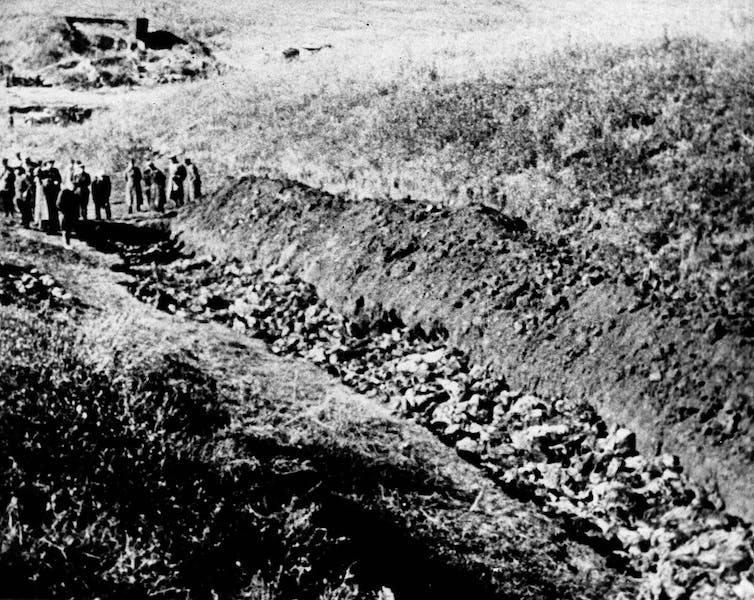 Part of the Babi Yar ravine on the outskirts of Kyiv, Ukraine, where the advancing Red Army in 1944 unearthed the bodies of 14,000 civilians killed by fleeing Nazis. AP Photo

Over the next two years, the Germans would continue to use the site as a killing ground, murdering another 70,000 individuals – Romani people, psychiatric patients, prisoners of war, and other civilians – before the Red Army liberated the city in November 1943.

The Germans were the first to try to silence the memory of the crimes committed at the site. In August 1943, fearful of the approaching Red Army, they forced prisoners from the nearby Syrets concentration camp to dig up and burn remains from the site.

The Soviet government, too, attempted to conceal what had taken place at the site. In 1961, they tried to fill in the ravine, unintentionally setting off a mudslide that killed at least 145 people. But Yevtushenko’s poem, published that same year, gave voice to the victims in the ground. In 1962, Dmitry Shostakovich dedicated his 13th Symphony to Babi Yar, further amplifying the memory of the crimes that had taken place there.

The full story of what took place was first told to the public by the Soviet writer Anatolii Kuznetsov, whose “Babi Yar: A Document in the Form of a Novel” was published in a censored form in the Soviet Union in 1966 and released in an uncensored version in 1970 after Kuznetsov’s defection to Great Britain.

Beginning in the late 1960s, grassroots groups of Jewish Holocaust survivors began to gather informally at the ravine on the anniversary of the massacre, and in 1966 they hung an unofficial memorial sign. But it was not until 1976 that the first official monument was installed at the site. Officially called “The Monument to Soviet citizens and POWs shot by the Nazi Occupiers,” it was silent about the relevance of the site to Jews.

The massacre of Jews at Babi Yar and other locations did not fit with the official Soviet version of the war. The Soviets spoke of what they called “The Great Patriotic War” as a historic battle between fascism and communism, and played down the racial and ethnic chauvinism of Nazism.

Silence on Jewish victimhood also avoided difficult questions about the collaboration of ethnic Ukrainians and others. In the Soviet myth, all Soviet citizens were equal victims of Nazi barbarism and could share in the ultimate victory of the Red Army over the German Wehrmacht, the armed forces of the Third Reich.

It wasn’t until 1991, after Ukrainian independence, that a menorah-shaped monument was erected at Babi Yar for the 50th anniversary of the massacre. It was the first official public acknowledgment of the Jews who were murdered at the site.

Since then, the site has become as contentious as the war itself as different stakeholders have come forward to erect their own memorials to other ethnic, religious, political and demographic groups murdered at Babi Yar – Romani people, children, priests and Ukrainian nationalists.

Only in 2016 was a commission formed to establish a more permanent memorial on the site. The Babi Yar Holocaust Memorial Center, scheduled to open in 2025, though, has drawn widespread controversy on account of the high-tech interactive museum envisioned by artistic director Ilya Khrzhanovsky as the centerpiece of the memorial. Pointing to the role-playing virtual reality experience of the planned museum, at least one critic dismissed it as “Holocaust Disneyland.”

As the sound of shelling barraged Kyiv, Zelenskyy once again used the Russian attack near the Babi Yar site as an appeal for action: “Nazism is born in silence,” he warned.