After 50 Years, "The Godfather" Still Has Fresh Lessons For Us

Sam Ben-Meir is a professor of philosophy and world religions at Mercy College in New York City. 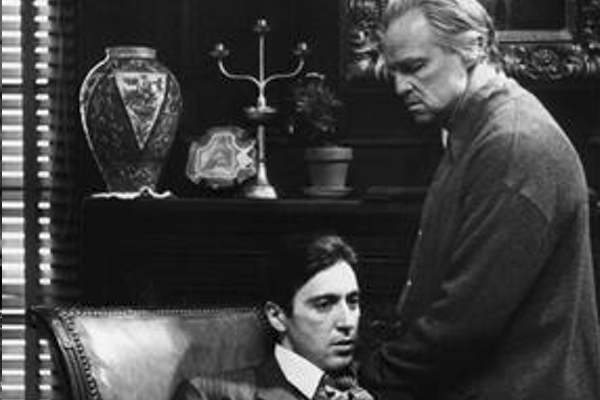 This March 24th marked fifty years since the release of Francis Ford Coppola’s The Godfather (1972), a film which has garnered such praise since it first appeared in theaters that it hardly seems necessary to rehearse its countless and well-deserved accolades. It is undoubtedly one of those few cinematic works of art that film historians, critics and the public universally recognize as among the very greatest films of all time. What is perhaps most extraordinary is that The Godfather, Part II (1974) somehow managed to attain the same breathtaking pinnacle of aesthetic perfection, when sequels are notoriously inferior to their predecessors.

So much has been written about these films that one might wonder what can be said in a brief article that has not already been repeated many times. Yet, as with any truly great work of art there is always more that can be unpacked because such works are, strictly speaking, inexhaustible.

In the romantic comedy You’ve Got Mail (1998), Joe Fox (Tom Hanks) refers to The Godfather as the sum of all wisdom and the answer to every question (“What should I pack for summer vacation? ‘Leave the gun, take the cannoli’.”) Even in jest it is an extraordinary statement to make about any film; but let us for a moment regard Hanks’ statement not as mere hyperbole. We could invoke many famous lines from the film which convey a certain wisdom (e.g., “keep your friends close but your enemies closer”) but any assortment of discrete lines, however memorable, would not justify placing The Godfather next to the I Ching.

The enduring wisdom of The Godfather is simply this: that the pursuit of power for its own sake ultimately demands the renunciation of love.

Consider the segment in Part II where, immediately after slaying Don Fanucci, the young Vito Corleone (Robert De Niro) returns to the bosom of his family, a loving father, and a dutiful husband. Vito is already a man divided within himself: on the one hand he is a thief and a killer, and at the same time he is a kind father and a good neighbor who will protect an old widow from the harassment of an unscrupulous landlord.

For Vito, power is not primarily an end in and of itself, but how he guarantees the well-being and prosperity of those he loves, and those who are too weak to protect themselves. Nevertheless, he has from the very outset unwittingly sown the seeds that will grow to destroy his family from within: the contradictions inherent at the inception of the Corleone family eventually lead to its ruin with the inexorable necessity of fate or destiny.

However, it will take the person of Michael Corleone (Al Pacino), perhaps the most tragic figure in all modern cinema, to in fact bring these contradictions to such a point that maintaining the thing that matters most – that is, the Family – means simultaneously to lose it. Michael realizes this, but his very addiction to power leaves him essentially powerless to prevent the ultimate crisis. On a dreary, autumn evening in Nevada Michael visits his mother and asks what Papa thought deep down – if “by being strong for his family, he could lose it?” His mother does not even seem to comprehend the question: “But you can never lose your family.” “Times are changing,” he responds.

Michael Corleone is a man who loses his family through his own doing – and all in the name of protecting the Family: first his brother-in-law, then his wife, Kay (Diane Keaton) who leaves him, their unborn son, and finally his brother Fredo (John Cazale), who dares to commit an act of betrayal against him. Only when he finally slays his brother does Michael sever himself from the humanly recognizable world. This final, monstrous act is carried out with the cold, methodical logic of revenge to which he has bound himself.

There are two fundamental ways we may answer an offence: on the one hand, I can nurse my hurt and resolve to hurt the other in return. In that case I am obeying the logic of revenge – which is the natural, mechanical response to a perceived injury. Revenge is the very essence of all non-spiritual response to being injured (as the philosopher Hegel demonstrated). Holding on to that hurt and refusing to let it go is to trap myself in the past – to take a bit of the past and let it determine my future, so that, in effect, I have no future. As a permanent, eternal condition, revenge is anti-historical and anti-free.

On the other hand, I can let my injury go: I can say “I forgive you.” What I have done at that moment is I have unmade the past and made it as if it is not done. In this sense, the act of forgiveness is the supreme spiritual act, because it is premised on nothing but spontaneity. It is the surpassing of natural logic, a reversal of the natural order of things and wholly self-determining.

Is it not one of the defining qualities of our previous president that he is precisely incapable of letting go of the past, that he must exact retribution on those who he perceives as turning on him (even when they are amongst his most loyal followers)? Trumpism is proof positive that to be wedded to the logic of revenge is just to be irrevocably stuck in the past – so much so that the future is literally reduced to the endless rehearsal of past grievances.

Unlike the Donald, the Don is not only immensely intelligent but, at the outset, fiercely caring and brave. The ultimate tragedy is that in his striving to maintain power, Michael loses the capacity to forgive.