What Does Pope Francis's Apology Mean to Indigenous Americans?

Annie Selak is Associate Director of the Women's Center at Georgetown University. 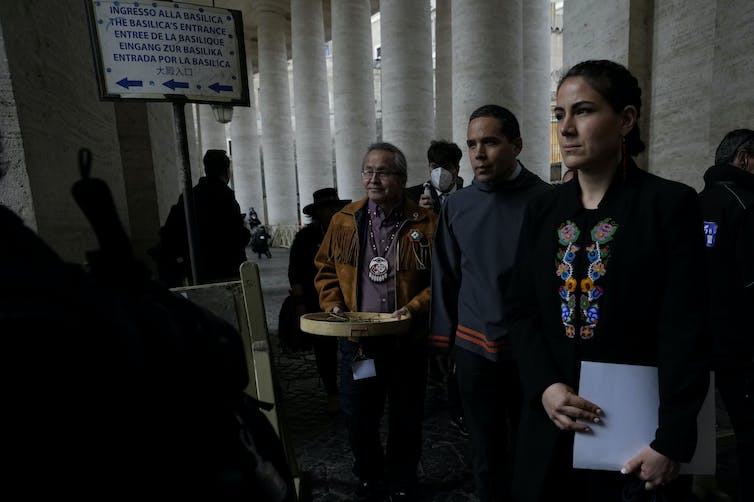 Representatives from the First Nations Inuit and Metis communities, in St. Peter’s Square at the Vatican, after their meeting with Pope Francis, on April 1, 2022. AP Photo/Alessandra Tarantino

Pope Francis apologized on April 1, 2022, to First Nations, Inuit and Métis delegations, acknowledging the harm done by residential schools in Canada and marking a crucial step in the church admitting its role in the abuse of Indigenous communities and children. Yet this apology, as important as it is, raises questions about what it means when a pope apologizes.

As a Catholic theologian who studies church authority, I’ve observed how previous papal apologies can speak for the entire church and either deny or claim responsibility.

It was once unthinkable for a pope to apologize, for admitting guilt would imply that the church was sinful. However, the Second Vatican Council, a gathering of bishops, cardinals, heads of religious orders and theologians that met from 1962 to 1965 and modernized the church, shifted the church’s perspective on change and instituted major reforms. It also opened the door to admitting fault.

Pope John Paul II apologized for many past errors of the church by marking March 12, 2000 as a “Day of Pardon.” In the document announcing the Day of Pardon, John Paul II said “the Church today, through the Successor of Peter, names, declares and confesses the errors of Christians in every age.”

This sent out a signal that papal apologies speak for the entire church, beyond a current pope’s personal responsibility. Just one year before, the International Theological Commission had stated that “in the entire history of the Church there are no precedents for papal apologies for ‘past wrongs.’” So, this set a significant new precedent. Christian theologian Jeremy M. Bergen calls the Day of Pardon “the most widely received instance of ecclesial repentance to date.”

Papal apologies are based on an understanding that the pope is the leader of the one, holy, Catholic and apostolic church, connected by tradition throughout time. As a result, it is possible for the pope to apologize for an event in the past when he was not pope, or perhaps not even born yet, because the church of a thousand years ago is connected to today.

When a pope apologizes, the apology often addresses the feelings of the victims, yet fails to implicate the church as responsible. Pope Benedict XVI acknowledged the pain of sexual abuse victims when he said in 2008, “I am deeply sorry for the pain and suffering the victims have endured, and I assure them that, as their pastor, I too share in their suffering.” Yet, Benedict XVI often stopped short of apologizing for the church’s cover-up.

By not admitting the church’s wrongdoing and cover-up, these apologies straddle a line of expressing regret without taking ownership and accountability. It is similar to a friend saying “I am sorry you felt that way” without claiming responsibility.

Francis more often admits the church’s fault for its actions. In a 2015 speech in Bolivia, Pope Francis spoke of the “grave sins” of colonization in the Americas and said, “I humbly ask forgiveness, not only for the offense of the church herself, but also for crimes committed against the native peoples during the so-called conquest of America.” 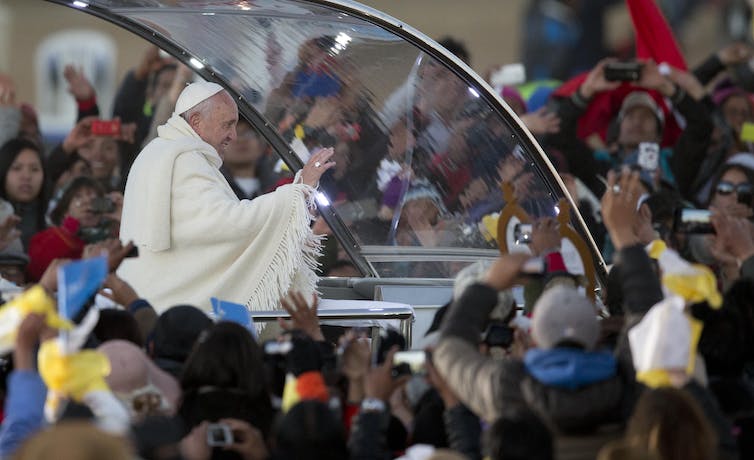 In this apology, Francis spoke for the entire church, even though the acts of colonialism began several centuries earlier. This apology affirmed the universal nature of the church, as well as Bolivians’ unique suffering, by Francis apologizing on Bolivian soil. Evo Morales, Bolivia’s former president, responded to the apology, saying, “For the first time, I feel like I have a pope: Pope Francis.”

From my perspective, Francis’ apology regarding residential schools walks a line between prior broad and specific apologies. He stated, “For the deplorable conduct of these members of the Catholic Church, I ask for God’s forgiveness, and I want to say to you with all my heart: I am very sorry.” In saying so, he placed a distance between himself and those “members of the Catholic Church” responsible for the abuse.

To be sure, there are those who say that actions are more important than words and that papal apologies are hollow without corresponding actions. While there are certainly actions that are necessary to repair and restore justice, I argue that it is also important to recognize that apologizing is itself an action.

The actions of a world leader such as the pope matter. Apologies are known to be one step in restorative justice. For example, the Truth and Reconciliation Commission of Canada’s “Calls to Action” document includes a call for an apology from the church.

Papal apologies may not say everything, but they do say something important. As the head of the Roman Catholic Church and a world leader, the pope apologizes both to the church and on behalf of the church to the world. These apologies are necessary starting points on the path to forgiveness and healing.