STEPHEN DANDO-COLLINS is the author of 47 books, many dealing with military history. The most recent was Constantine at the Bridge: How the Battle of the Milvian Bridge Created Christian Rome (Turner, 2021). The next will be Rebels Against Rome: 400 Years of Rebellions Against the Rule of Rome (Turner, January, 2023.) He extracted this article from his manuscript Fighting Horses and Their Famous Riders. 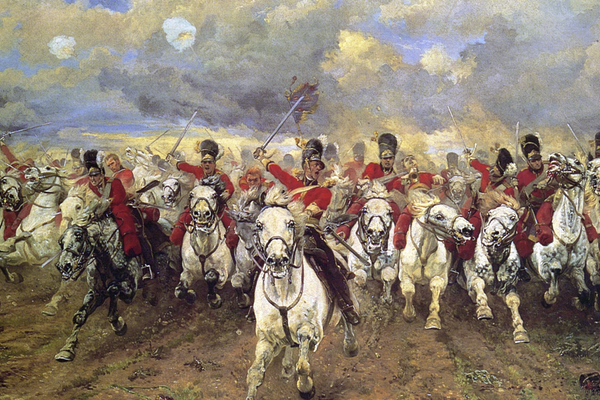 This painting depicts the cavalry unit in a heroic posture at Waterloo. The Greys' actions have since been reassessed, and their disregard of orders considered a factor in cavalry losses that nearly doomed the campaign.

207 years ago this June 18, the Duke of Wellington’s army famously defeated Napoleon at the Battle of Waterloo. Wellington himself described it as “a near run thing.” In fact, in the battle’s early stages the defeat of British cavalry and death of a major general meant that it would take a surprise evening infantry charge to bring Wellington victory. To cover up the cavalry failure and true reason for the general’s death, the British establishment blamed an Irish horse. This is the case for the defense of that horse.

Early on the afternoon of Sunday, June 18, 1815, with sabers held high, six hundred red-coated British riders of the 2nd Union Cavalry Brigade charged toward the army of France’s Emperor Napoleon. Their target was the advancing infantry of Marshal Drouet, Comte d’Erlons, which had just broken through the British 9th Brigade on the Allied centre left and threatened to outflank and roll up the Duke of Wellington’s entire army. The Battle of Waterloo was at a crucial early stage, and the British cavalry had orders to halt the French advance.

Leading this charge down the slope of Mont St. Jean and then diagonally across the battlefield were England’s 1st Royals Dragoons, followed by the Inniskilling Dragoons from Ireland. Another 393 Scottish horsemen from the Royal North British Dragoons trailed them at the walk. Because all the Scotsmen were mounted on grey horses, their regiment was known as the Scots Greys.

Major General Sir William Ponsonby, 2nd Union Brigade commander, had instructed Scots Grey’s commander Lieutenant Colonel James Hamilton to hold his troopers in reserve so that Ponsonby could send them in where and when needed once he’d gauged the effect of the Royals’ and Inniskillings’ charge.

From the flank, British horsemen plowed into the French as they attacked the Allied second line, slashing and slicing their way through and seizing the eagle standard of the French 105th Regiment of the Line.

In the centre of the struggle, out of reach of the cavalry, determined French infantry forced outnumbered Gordon Highlanders to break and begin streaming back through the slowly approaching Scots Greys. Colonel Hamilton, infuriated that fellow Scots were retreating, bellowed at the Highlanders not to run. Then, disobeying General Ponsonby’s express command, Hamilton drew his saber and ordered his horsemen to charge. The Scots Greys had not seen action in twenty years, and Hamilton’s inexperienced troopers excitedly surged forward with him. Watching from the slope to the rear, a furious General Ponsonby ordered the recall sounded, but the Scots Greys ignored the bugle call.

To counter the British cavalry, French commanders formed their bayonet-equipped troops into squares. Some frustrated British cavalrymen vaulted their horses over their triple lines to attack the squares from within. But once inside, they were pulled from their horses and bayoneted.

Cursing, forty-two year-old General Ponsonby, fearing the French would send cavalry to cut off the Scots Greys, surprised his four aides-de-camp by drawing his sword and kicking his small bay Irish stallion into action, heading for the fighting to personally extricate his cavalry reserve before it was too late. His aides followed.

“Reform! Reform on me!” Ponsonby angrily yelled to the Scots as he joined them.

But, the Anglo-Irish Ponsonby had only commanded the Union Brigade for three weeks; not time enough to win the Scots’ respect and loyalty. Ignoring him, they followed their Scottish colonel in charging the guns of the French Grande Battery, leaving General Ponsonby alone and isolated. Even Ponsonby’s aides joined the charge.

Shortly after, Ponsonby was hit in the body by a musket ball fired from a nearby French square. He fell to the ground, bicorn hat flying. Ponsonby succeeded in remounting his horse, and turned back toward British lines. Beneath his blue jacket, the general was bleeding profusely.

Ponsonby’s worst fears were realized. French cavalry arrived. The green-uniformed 4th Light Horse Lancers commanded by thirty-four-year-old Colonel Louis Bro de Comeres were soon pressing in on the Scots Greys’ rear with their nine-foot-long lances, picking them off. The British would be so impressed by their effectiveness that, the following year, four British dragoon regiments would be converted to lancers.

Amid the carnage, Colonel Bro de Comeres spotted the standard-bearer of the French 55th Regiment, a young second lieutenant whom he knew, being circled by Scots Greys. The colonel rode to the lieutenant’s aid, but arrived to see the lieutenant fall and a Scots Grey trooper seize his eagle standard and turn back toward British lines. The colonel gave chase.

His pursuit brought him to a plowed field in the valley between Hougoumont Farm and the La Belle Alliance inn, roughly in the battlefield’s center, with a wood to one side and British infantry lines half a mile distant. There, he came upon two stationary horsemen. One, his senior noncommissioned officer, Francois Orban, had a bareheaded senior British officer bailed up.

This was, the colonel later learned, General Sir William Ponsonby. He had his sword in his hand, by his bay horse’s side. The vastly experienced Orban, awarded the Legion d’Honeur by his emperor, had the tip of his lance at the general’s chest. With his left hand, Orban was motioning for Ponsonby to drop his sword and surrender.

Ponsonby’s predicament was spotted by four retreating British horsemen including the Scots Grey with the captured French eagle, who diverted to aid him. Orban later said that he now saw General Ponsonby move as if to escape. Orban plunged the needle-sharp tip of his lance into Ponsonby’s heart. The general toppled from his horse.

Colonel Bro de Comeres meanwhile rode at the approaching British quartet, felling a major and a lieutenant with his saber and sending two Scots Grey troopers fleeing. Orban, the general’s killer, chased this pair, dispatched both Scotsmen, then retrieved the eagle of the 55th, before watching British infantry.

Orban returned to General Ponsonby’s body. The general’s little bay horse remained close by his fallen rider. By this time Colonel Bro de Comeres had been wounded in the arm and withdrawn, but Orban calmly dismounted and took Ponsonby’s sword as a souvenir. Orban survived the battle and subsequently hung the sword above his farmhouse fireplace.

With half the Scots Greys and their impetuous commander Lieutenant Colonel Hamilton soon also dead, the shattered unit withdrew in disorder, playing no further part in the battle. They would join the pursuit of the French after Napoleon’s army was finally overwhelmed, by Wellington’s charging Foot Guards, just after eight o’clock that evening.

At dawn the following day, as Allied troops located wounded and buried the dead, General Ponsonby’s personal servant found Ponsonby in the plowed field, stripped of all but his bloodied shirt by local booty hunters. His loyal little bay horse was standing protectively over the general.

Before long, Gentleman’s Magazine reported the demise of Ponsonby, the most senior officer on either side to die at Waterloo, commenting that it “was occasioned by his being badly mounted.” The article claimed the bay became bogged and was not strong enough to free itself, allowing the general to be overtaken by French lancers.

Numerous Ponsonby myths would be perpetuated by nineteenth century books and articles, and the 1970 Dino De Laurentiis movie Waterloo. But the story blaming Ponsonby’s horse for his death became accepted as fact. One claim was that Ponsonby used the bay in preference to a more valuable chestnut horse, to save money. Three days before the battle, another officer named Hamilton, Lieutenant Colonel Alexander Hamilton of the 30th Regiment of Foot, attempted to sell the powerful chestnut to General Ponsonby, describing Ponsonby’s regular mount as ‘a bay hack’ too weak for battle. The general knew the chestnut was a fine animal, but Hamilton was asking £100, which Ponsonby considered exorbitant. He stayed with his tried and trusted bay.

Until his dying day in 1838, Alexander Hamilton blamed the bay horse for General Ponsonby’s death, declaring that, had Ponsonby purchased the chestnut from him, he would have survived. This is unlikely. For the battle, Hamilton loaned the chestnut to his battalion quartermaster. The horse proved so unruly it embarrassed the quartermaster several times that day.

No experienced cavalry officer – and Wellington considered Ponsonby one of his best – would go into battle, with his life depending on it, deliberately poorly mounted. However, the story that General Ponsonby’s death was due to his “inferior” and “unmanageable” horse was more palatable than blaming the late impetuous Lieutenant Colonel James Hamilton and his Scots Greys.

Lieutenant George Gunning of the 1st Royals, who witnessed firsthand General Ponsonby being shot before having his own horse shot from under him and running to take refuge with British infantry, defended the Irish bay. Gunning wrote, “The ridiculous story about the General’s horse being unmanageable was all a farce.”

The little bay horse, whose name has not come down to us, served the general stoutly, and loyally remained with its dead master. But it could not write to the press in its own defense. It’s believed the horse was returned to the family estate in Ireland, Bishopscourt, twenty miles southwest of Dublin in County Kildare, taken home by the general’s servant. There, at Bishopscourt, the bay peacefully lived out its days.

The general’s loyal horse joined the many examples of scapegoats used down through history to excuse failure in grand enterprises. Like anonymous figures blamed without evidence of voter fraud in recent elections, it was a claim easily made and not easily refuted. Until now.