The Traitor King: Edward VIII and The Future of the British Monarchy

Andrew Lownie is the author of The Mountbattens and Stalin’s Englishman. His latest book, Traitor King: The Scandalous Exile of the Duke & Duchess of Windsor , will be published on July 5 by Pegasus books. 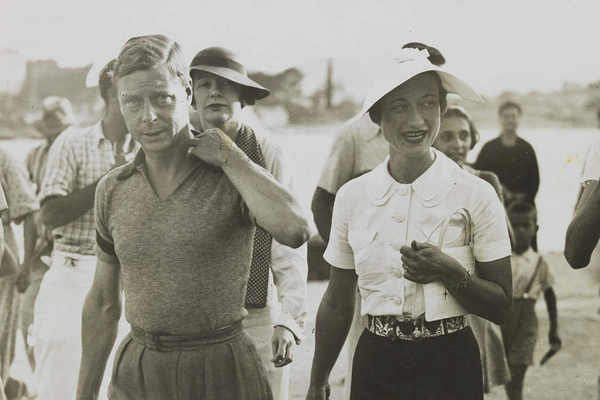 On Friday December 11, 1936, the final vote on the Abdication Bill was passed in Parliament and Edward Vlll ceased to be King. He had reigned for 326 days. His father’s premonition—that within twelve months of his death his son would "ruin himself"—had come true.

Later that day he broadcast to the nation, "I have found it impossible to carry the heavy burden of responsibility and to discharge my duties as King as I would wish to do without the help and support of the woman I love."

Immediately he was driven in heavy rain to the south coast port of Portsmouth where he crossed the gangway onto HMS Fury – the original choice HMS Enchantress was not deemed appropriate – with his dog, Slipper, under his arm. "I knew now that I was irretrievably on my own," he later wrote. "The drawbridges were going up behind me."

In order to marry the twice divorced American Wallis Simpson, the new Duke of Windsor had given up everything: the job for which he had been prepared all his life, his interest in the Royal homes of Balmoral and Sandringham, his beloved country retreat Fort Belvedere, and the support of his family.

Their reaction was swift. As part of the financial settlement – he was to receive £25,000 a year annuity like his siblings – he was to stay out of Britain so as not to upstage his younger brother Bertie, now the new King George Vl.

Though her sisters-in-law had been given the title of Her Royal Highness on marriage, this was denied to Wallis – an insult which rankled with the Windsors for the rest of their lives and was almost certainly illegal.

No member of his family attended his wedding in June, which consisted of seven British guests, and Lord Mountbatten, for whom the Duke had been best man, was forbidden from carrying out the same role for him.

The Church of England had banned any minister from conducting the service and the couple had resigned themselves to a simple civil service until the Reverend Robert Anderson Jardine, an eccentric "large-nosed, bulging-eyes, red-faced" minister from the North of England offered his services.

The Windsors were to be kept out of Britain for the rest of their lives – he lived another thirty-six years after the Abdication, she another fifty years. Apart from a wartime appointment as Governor of the Bahamas, he was denied any official role in spite of his intensive lobbying for some sort of diplomatic job involving America.

The couple divided their time between various rented homes in Paris, the South of France (one owned until recently by Roman Abramovich)and a flat in the Waldorf Astoria in New York, all whilst sponging off rich socialites in Palm Beach, Newport and Long Island.

They were not invited to his niece’s wedding or her coronation but they joined other members of the Royal Family at the unveiling of a plaque to the Duke’s mother, Queen Mary, in June 1967. Even then, they were not invited to stay for lunch. It was the first time the Royal Family and Wallis had met in over thirty years and she was to see them only once more in Britain – at her husband’s funeral.

The lesson of the Duke and Duchess of Windsor is clear. Once you decide to leave "The Firm," you are out. As the Queen pointed out to her grandson Harry,  you cannot be half in and half out.  It’s a lesson he is only just comprehending as his star fades.

The Royal Family has largely survived because it has been prepared to be ruthless and respond to public opinion. It may have acted too slowly over Prince Andrew, given the drip feed of critical stories about him over many years, but once he had agreed to pay off Virginia Giuffre he was a non-royal. He was banned from taking part in all but family occasions and not entitled to use his title of HRH, though he retains some honours including Knight of the Garter. The challenge now will be how to rehabilitate him in terms of public opinion since he cannot be kept out of sight forever.

Non-working royals had already been cut from the beauty parade on the Buckingham Palace balcony on ceremonial occasions, as part of a long term plan of streamlining the Royal Family. The brand will now just be the Queen, Prince Charles and his wife Camilla, Prince William and his wife Kate, and their three children; this was very evident during the Platinum Jubilee celebrations.

The Royal Family is here to stay – three generations in waiting were on the Buckingham Palace balcony – and it will be one focused on public service rather than private pleasure. There will still be pomp but also a more casual approach, more engagement with charitable and environmental organizations and fewer ceremonial set pieces.

The image which the royals wish to project is of a youthful monarchy. The Queen may have reigned for seventy years and her son may be seventy-three, but much of the focus is on Prince William, just forty, and his young family.  Increasingly he is carrying out joint functions with his father, as he seems able to manage the conflicting desires for approachability and mystique.

The problem with streamlining is that everyone wants a bit of the Royal Family – the regiments of whom they are Colonels, the charities which rely on them for fund raising, the organizations which need them to champion their cause—and there are not enough of the dutiful ones to go around.

The Queen’s generation – her cousins the Dukes of Gloucester and Kent—are now respectively in their late seventies and eighties, and so much is falling on Prince Charles’s siblings Anne (herself almost seventy-two) and Edward and their partners. Anne’s children have chosen to be non-Royals and Edward’s children are still teenagers, so the only option to fill the labor shortage is to give roles to the daughters of Prince Andrew, something he is keener on than the rest of the Royal Family. Watch this space for who wins this power struggle.

It is eighty-six years since the Abdication but it is still a resonant sore within the Royal Family, a reminder that they are human. Britain was lucky that George Vl and Elizabeth ll proved to be model monarchs but times are a-changing and the succession of Charles – potentially  within months – will be an opportunity to reassess the role, if not the continuation, of the monarchy.

It has lasted for over a thousand years and survived one of its greatest challengers in 1936. There is no reason it will not continue, albeit more low key, because in the end the brand comes before family as the Duke and Duchess of Windsor learnt to their cost.