The Dictatorship of the Supreme Court

Christine Adams is Professor of History at St. Mary's College (MD) and a past fellow of the American Council of Learned Societies. 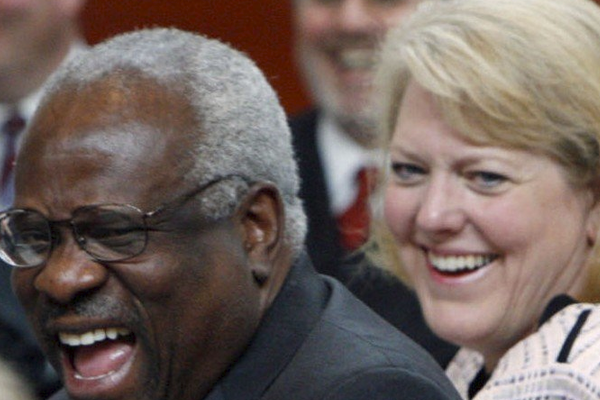 Democratic activists have been raising the alarm about the future of American democracy since Donald Trump was elevated to the presidency in 2016. January 6 underlined the clear and present danger we face. Representative Benny Thompson, co-chair of the January 6th committee, argued that the events of that day “and the lies that led to insurrection have put two and a half centuries of constitutional democracy at risk.” For the moment our democratic institutions hung on by a thread, this thinking goes. Democratic leaders now argue that this November’s elections are crucial to preserving them.

But, in reality, it may be too late. Authoritarian dictatorship has already arrived in another branch of government. Apparently beyond the reach of Congress, the executive branch, and a majority of the voters, the United States is governed now to an alarming degree by six unelected Supreme Court justices with lifetime tenure who have arrogated to themselves the power to make and break laws with impunity. The recent decision to overturn Roe v. Wade is only the latest example of their willingness to ignore settled law based on motivated reasoning against the will of the majority of Americans. Both Congress and the President appear powerless to check the unfettered power of this court.

Oligarchies have been a common form of government throughout history. A Council of Elders ruled Sparta. Patricians ruled many early modern cities, especially in the Italian and German states. France attempted formalized oligarchy with the Directory in the late eighteenth century, while in more recent times, juntas wielded power in Spain and Latin American countries after military coups.

However, in the past, oligarchies were composed of politicians or military men, not judges. No other modern country allows its supreme court the enormous power ours claims, beginning with Marbury v. Madison (1803). The closest parallel may be the mullahs in Islamic theocracies. But surely, Chief Justice John Marshall, who authored Marbury, did not envision the Supreme Court imposing its will as modern courts have. In recent decisions, the court has claimed the power not only to declare laws it does not like unconstitutional, but also to limit the executive branch’s ability to carry out policy, a right a previous iteration of this same court had enshrined in Chevron v. National Defense Resources in 1984. Thursday’s decision in West Virginia v. EPA gutted the power of administrative agencies to establish rules for programs that Congress does not explicitly write into law, a decision that will significantly limit the EPA’s ability to enact environmental reforms. More generally, it will impede the ability of presidents to govern.

Since attaining its 6-3 majority, the right-wing court has moved aggressively to impose its revanchist vision on a country that opposes its ideological bent. While the court has sometimes been in advance of public opinion—as they were in the landmark decision Brown v. Board of Education (1954)—they have now set themselves explicitly at odds with it. In the past, prevailing social and cultural mores guided court decisions, but that is no longer the case. A clear majority of Americans oppose overturning Roe and the decision to strike down New York’s limitations on the right to carry concealed weapons in public flies in the face of a public broadly supportive of firearm restrictions to limit gun violence, as well as historical precedent. Although Chief Justice John Roberts fears for the court’s legitimacy and would prefer an incremental approach, he has lost control to his less patient colleagues—and continues to vote with them.

The court’s vision aligns with the GOP, whose power it has assiduously facilitated, and the Federalist Society, which groomed and selected them. Significantly, the justices who now control the court were appointed by Republican presidents who lost the popular vote and approved by a Republican-controlled Senate that represents a minority of voters. At the same time that Samuel Alito piously opines in Dobbs v. Jackson Women’s Health Organization that power should be returned to the people—he argued that overturning Roe "allows women on both sides of the abortion issue to seek to affect the legislative process by influencing public opinion, lobbying legislators, voting, and running for office"—he and the radical majority on the court have made it increasingly difficult for voters to elect representatives who share their views. Citizens United (2010) opened the spigot for corporate money. In 2013, Shelby County v. Holder declared essential parts of the Voting Rights Act of 1965 unconstitutional—a law whose provisions the Senate voted 98-0 to extend in a vote that Antonin Scalia airily attributed to the fear of voting against “racial entitlement.” Since then, Republican states have eagerly targeted Democratic voters with increasingly onerous restrictions on access to the ballot. In a 2019 decision in two state redistricting cases, John Roberts asserted that “partisan gerrymandering claims present political questions beyond the reach of the federal courts,” which means that, for the most part, elected officials now choose their voters rather than the reverse. Add these decisions to the many anti-democratic features of American political institutions and it’s clear that accountability to the electorate is a mirage. While Democrats currently control two branches of government, the six-member majority is eagerly approving all Republican efforts to make sure that isn’t the case for long—including this week’s decision approving Louisiana’s Republican-drawn legislative map that dilutes the power of Black voters.

The dysfunction of the U.S. Congress enables the Supreme Court’s will to power. Political polarization—more accurately, Republican obstructionism—means that the Democratic majority is helpless before a court determined to remake this country in its image. Efforts to bring about court reform have failed. Justices blithely refuse to follow a code of ethics or to recuse themselves from cases in which they have profound conflicts of interest, most notably Clarence Thomas, whose wife Ginni participated in the effort to overturn the election of President Joe Biden in 2020.

The justices have signaled repeatedly that they recognize the specious reasoning in many of their decisions by reassuring the public that it will not be used as precedent in other cases, most famously in Bush v. Gore. But they have done so in other cases as well. In 2014’s Hobby Lobby decision, Alito wrote: "This decision concerns only the contraceptive mandate and should not be understood to mean that all insurance mandates, that is for blood transfusions or vaccinations, necessarily fail if they conflict with an employer's religious beliefs." Concurring with the Dobbs decision, Brett Kavanaugh assured people concerned about their privacy rights that “overruling Roe does not mean overruling those precedents, and does not threaten or cast doubt on those precedents.”

The right-wing members of the court clearly believe that their vision of America justifies their disregard for law, precedent, and history. Their willful, deeply-held ignorance of the actual history of the 1780s and 1860s—despite their somber paeans to the wispy-thin legal theory known as “originalism”—reveals their actual disregard. But this is how authoritarians act.  In September 1797, members of the French Directory overturned election results they did not like in the Coup of 18 Fructidor, and did so again in 1798. They ignored public sentiment, believing that their political goals justified the violent and extralegal exercise of power. But disregard for the law begets disregard for the law. The Directory’s soft coups paved the way for Napoleon Bonaparte’s seizure of power.

The six justices who now control our lives are impervious to public opinion. They feel no deference to a Democratic Congress nor to a democratically elected president. They pick and choose the laws that govern us. Their willingness to ignore precedent and to interpret law in a way that so clearly favors the interests of a radical Republican Right enables the sense of entitlement that led armed men and women to storm the Capitol on January 6. Power without legitimacy begets violence. Unless voters turn out in force this fall to stand up to the authoritarianism so clearly on display, we may retain the structures of democracy, but we no longer live in one.