Carole Adrienne is a documentarian and museum and archive professional who has organized an archive for Old St. Joseph’s National Shrine, twice chaired “Archives Week” in Philadelphia and has served on advisory panels for the Philadelphia Archdiocesan Historic Research Center, The Mutter Museum’s “Civil War Medicine” exhibit and its “Spit Spreads Death: The 1918 Flu Epidemic” exhibit.  She is working on a documentary film series on Civil War medicine. Her first book, Healing a Divided Nation: How the American Civil War Revolutionized Western Medicine, will be published by Pegasus Books on August 9. 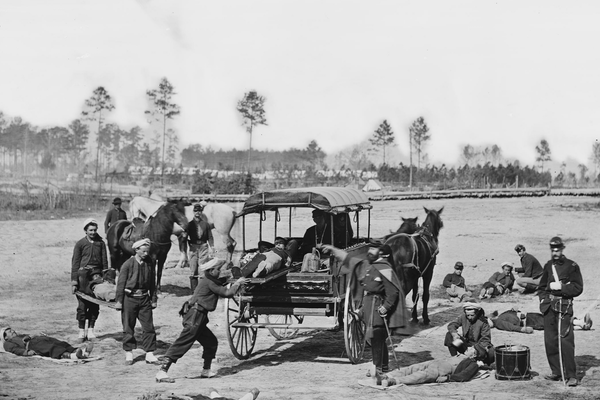 The following is excerpted with permission of Pegasus Books from Carole Adreinne's Healing a Divided Nation: How the American Civil War Revolutionized Western Medicine (August 9, 2022).

The Civil War marked the beginning of modern advancements in medicine that were generated in response to the new weapons technologies that created a wholesale mechanical slaughter.

The medical community of the Civil War achieved an outstanding record for survival rates from disease and wounds. They designed, built, and operated revolutionary new hospitals. They served as the medical directors of huge armies and completely reorganized the medical corps. They initiated programs and research and left a legacy of skill and honor.

Organized, systemized medical care did not exist in America of the 1860s. Skilled nursing as a profession or a staff position did not exist. Methods of getting wounded men from the battlefield to a place of care were haphazard at best and nonexistent at worst. There were no large-scale treatment facilities and surgery was rarely performed in the country. By the end of the war, there were great hospitals like Chimborazo and Satterlee, hospital trains and ships, skilled nurses, and a working ambulance corps.

The Civil War doctors embraced a practical approach to medicine, setting up new systems and methods, sometimes learning surgical techniques in camps and hospitals from the diagrams in books. Many of the physicians and surgeons were recent medical school graduates with no practical experience, but they were able to share ideas and information with their more experienced colleagues. They quickly implemented the discoveries of other men, and what they hadn’t learned in the medical schools, they learned on battlefields and in field hospitals. The more immediate the care, the greater the likelihood of survival.

Many more lives were saved than was possible in earlier wars, and many lives were saved later because of knowledge gained during the Civil War. Both the Confederate and Union medical departments exercised good, solid, logical organization and changed the vista of health care. The war trained thousands of surgeons at a time when there were very few doctors in America who knew how to treat gunshot wounds. The technology of the time also gave them options that had not been available in earlier wars: surgical tools, anesthesia, and improved conveyances for the wounded.

The Civil War changed the long-held tradition that government did not have responsibility for the health of the individual soldiers. Before the war, no one who was injured had expected to be nursed by a trained professional, had envisioned that hospitals would be clean, or counted on the administration of anesthesia before surgery. The arrival of an ambulance was not anticipated by anyone who was wounded either in war or in peacetime, but by the end of the Civil War, expectations on the part of the patient, the military, and civilians had changed forever. Confederate General Alexander E. Porter of Georgia looked back at the medical outcome of the terrible conflict.

Was all our blood shed in vain? Was all the agony endured for the Lost Cause but as water spilled upon the sand? No! A thousand times, no!

We have set the world record for devotion to a cause. We have taught the armies of the world the casualties to be endured in battle; and the qualities of heart and soul developed both in our women and men, and in the furnace of our afflictions, have made a worthier race, and have already borne rich reward in the building up of our country.

These medical departments gained great insights and understanding from the horrific carnage. They grouped patients with similar injuries and made revolutionary observations. They worked with astonishing efficiency, saving lives by getting the wounded off the battlefields more quickly and transported to hospitals faster. They created centers of medicine that did not exist before the Civil War. They changed the substance of health care in America.

Before the war, an M.D. was someone who attended a year of medical lectures and then repeated them for a second year. The war created a new process with measureable standards. A military doctor not only had to graduate with an M.D. and show apprenticeship to an established physician but had to pass an oral and written examination. Before the war, doctors were all M.D.s; after the war, specialisms began in neurology, trauma management, and ophthalmology, for example. Doctors became specialists. Hospitals were no longer just for indigent and dying people. Today, when we see an injured person transported to hospital emergency care via ambulance, we are witnessing Civil War medicine.

In retrospect, it seems remarkable that despite primitive surgical conditions and desperate supply shortages on the battlefield, so many of the casualties survived—a victory of both science and spirit. Although the bodies had lain “thick as leaves,” revolutionary changes in health care had emerged from the ashes of the war.

Like the killing power of weapons, medical science has soared in many ways. No subsequent war has taken the lives of as many Americans; a result of improved medical education, advanced surgical techniques, the under- standing of neurology, and faster evacuation of the wounded. Women and African Americans have achieved prominent roles in medical science and society, the terms of the Geneva Convention still seek to protect medics and the wounded in times of war. The American Red Cross and the International Committee of the Red Cross have grown to provide emergency relief for a myriad of natural and manmade disasters. These profound human achievements, as well as the record of the hideous carnage, are the legacies of the American Civil War.

Editor's Note: Carole Adrienne will be celebrating the launch of her book with a virtual in-conversation event with Robert D. Hicks, William Maul Measey Chairholder at The College of Physicians of Philadelphia, sponsored by the Free library of Philadelphia’s Social Science and History Department on Tuesday, August 9th at 7:00pm.  Register here for this free event!