How Ambassador Joseph Grew Tried to Prevent the Pacific War

Steve Kemper is the author of  Our Man In Tokyo: An American Ambassador and the Countdown to Pearl Harbor, published November 8 by Mariner Books. His work has appeared in many national publications, including Smithsonian and National Geographic, Outside, and Wall Street Journal. After graduating from the University of Detroit, he taught literature and writing at the University of Connecticut while earning a Ph.D. Additionally,Kemper taught writing and journalism as an adjunct professor at CUNY Graduate School of Journalism and at Fairfield University. 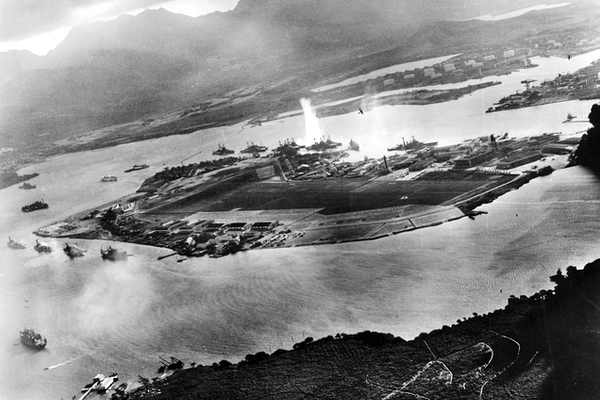 Film from a Japanese aircraft just after the beginning of the attack on Pearl Harbor, December 7, 1941

“Japan may go all out in a do-or-die effort, actually risking national hara-kiri,” cabled Ambassador Joseph C. Grew to the State Department on November 10, 1941, five weeks before Pearl Harbor. “Armed conflict with the United States might come with dangerous and dramatic suddenness.” The next day he wrote in his diary, “That important telegram is on the record for all time.”

This wasn’t Grew’s first warning to the State Department about Japan’s worsening bellicosity, but despite his deep experience as a diplomat, his dispatches from Tokyo were often ignored or dismissed by Secretary of State Cordell Hull and his chief advisor on the Far East, Stanley Hornbeck. Grew had likewise been warning Japanese leaders not to underestimate America’s willingness to fight, if pushed too far. But they too dismissed Grew, convinced by their censored jingoistic media that America was a nation of pacifists and isolationists too soft to tolerate the hardships of war.

An ambassador must work in two directions, toward both his home and host governments. During his decade as U. S. ambassador to Japan, Grew sometimes felt he was battling both: irrational nationalism among the Japanese, and inflexible principle in the State Department.

The records Grew left behind offer a remarkable lens into the world-shaking history that led to World War II. The diary for his Tokyo years runs to 6,000 pages. His archive at Harvard comprises thousands of other pages—letters, speeches, dispatches, synopses of important conversations, and clippings from American and Japanese newspapers. For anyone except experts, these documents and this era in Japan are full of surprises.

Many of us are familiar with the rise of Nazism and fascism in Europe during the 1930s. Hitler, the Gestapo, crowded trains bound for extermination camps—these have become part of our cultural and historical memories. But the state of affairs in Japan during this same period is less well known to many Americans, whose knowledge about Japanese-American relations often begins with images of smoking, half-submerged ships in Pearl Harbor. But how did we get to those stark images? Grew knew.

Few Americans recognize the name of Prince Konoye Fumimaro, the prime minister who pushed Japan toward totalitarianism and conflict, but then made a desperate attempt to reverse that momentum in the fall of 1941 by proposing to meet secretly in U. S. territory with President Franklin Roosevelt to avert the looming war—a proposal agreed to by FDR but slowly strangled to death by Hull. Few have heard about the sinking of a U. S. gunboat by Japanese pilots in 1937, a crisis that spurred Grew to start packing in anticipation of a declaration of war. It’s probably news to most Americans that Japanese forces attacked hundreds of American properties and citizens in the years before Pearl Harbor. Whenever a new Japanese foreign minister came into office, Grew presented him with a typed list of bombings, confiscations, and assaults. By the end of the 1930s, the list described more than 300 incidents. For Grew, Pearl Harbor wasn’t the beginning of hostilities, but the tragic culmination of the Japanese military’s imperial megalomania.

His decade in Japan was volatile and often violent. In addition to the impulsive belligerence of the military, which gradually enfeebled the civilian government, Grew coped with assassinations, conspiracies, atrocities, coup attempts, and a fevered propaganda campaign directed against the United States and other Western powers. In contrast to Hitler’s Germany, the political structure in Japan was deeply unstable. Cabinets fell like cherry blossoms. In ten years, Grew dealt with twelve prime ministers and seventeen foreign ministers.

Even while anti-Americanism swelled in Japan, Grew remained popular there because he appreciated certain Japanese qualities and gregariously promoted friendship between the two nations. He believed in cultivating personal relationships to create goodwill and to make differences easier to resolve. Typically, about half of the guests at the U. S. embassy’s many diplomatic affairs were Japanese, in contrast to other embassies, where Japanese guests were rare. For Grew, friendships helped make diplomacy possible.

He called diplomacy “the country’s first line of defense,” and believed whole-heartedly that it could overcome differences and preserve peace between nations. He had faith that rational, well-intentioned countries linked by business, culture, and mutual political concerns would be guided by reason and enlightened self-interest toward compromise instead of conflict.

Japan forced him to learn that none of these beliefs could survive the heat-blast of delirious nationalism and militarism, which replaced facts and truth with lies and disinformation. Over and over Grew reminded Japan’s leaders that rationality and enlightened self-interest dictated against turning the U. S. into an enemy. Yet in the end none of the close links between America and Japan, and none of Grew’s carefully nurtured personal relationships, could stop Japan’s determined march toward war.

Nevertheless he worked for peace right up until bombs shattered it at Pearl Harbor. A few hours before the attack, he drove to the home of the Japanese foreign minister at midnight with a last-minute appeal from President Roosevelt to Emperor Hirohito. After the war, when a congressional committee grilled Grew about when he knew war was inevitable, his answer was never. “I was doing everything in my power to prevent a war between the United States and Japan, up to the very end. . . . That is the only position that I think any diplomatic representative should take.”

Grew is an appealing figure for our time. His quiet devotion to American principles and his perseverance in the face of lies and broken promises are admirable. He failed in his mission to preserve peace, but he offers a brave example of how to attempt it.