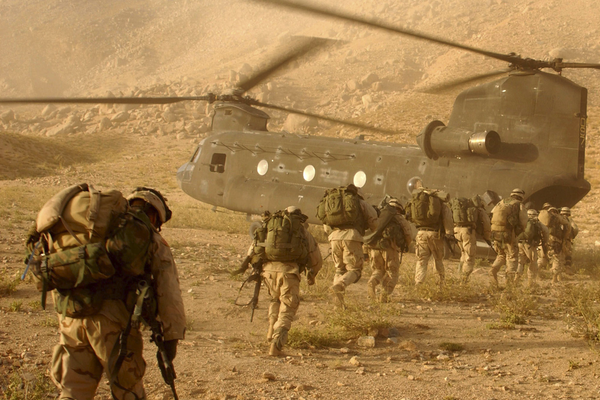 It has become customary on Veterans Day, amid tributes to our warriors, to avoid asking if the wars in which they fought and died were necessary.  This is a missed opportunity for examining and debating U.S. foreign policy and perhaps saving lives in the future.

The most recent wars in Afghanistan and Iraq were undertaken under the aegis of the “war on terror,” announced by President George W. Bush nine days after the horrendous terrorist attacks on the U.S. on September 11, 2001.  Bush declared that “any nation that continues to harbor or support terrorism will be regarded by the United States as a hostile regime.”

The identification of a nation as a “state sponsor of terror” had heretofore not been cause for war.  At the time, there were seven nations on the State Department’s list – Cuba, Iran, North Korea, Syria, Iraq, Libya, and Sudan, with Afghanistan about to be added.  Counterterrorism operations typically involved police, intelligence, and financial agencies, not the U.S. military.  This was about to change.

In the weeks following 9/11, Bush met with his principal advisers and declared early on that his administration must show visible progress in counterterrorism, that “we’ve got to start showing results.”  As he later disclosed to journalist Bob Woodward, “I had to show the American people the resolve of a commander in chief that was going to do whatever it took to win.  No yielding.  No equivocation.”

This determination to show “results,” indeed to be seen as the paramount leader in the global fight against terrorism, pushed in the direction of war.  Police and intelligence operations, after all, were hardly sensational.  Apart from capturing or killing Osama bin Laden, few notable “results” could be expected – and no one knew how long bin Laden would prevail in a game of cat and mouse.  Employing military force, on the other hand, would exact retribution for the 9/11 attacks and demonstrably prove the president’s resolve in the eyes of his domestic audience.

Congress gave Bush a free hand.  On September 14, both chambers passed an Authorization for the Use of Military Force (AUMF), permitting the president to “use all necessary and appropriate force” against “those nations, organizations, or persons he determines planned, authorized, committed, or aided the terrorist attacks that occurred on September 11, 2001.”  The only dissenting voice came from Barbara Lee, Democrat of California.  Having grown up “in a military family,” she explained, “I understand that we don’t want to send our young men and women into harm’s way if we can avoid that.”

The 2001 AUMF did not define terrorism or mention any specific enemy.  Hence, the president was free to fill in the blanks.

This, in turn, presented a golden opportunity for key administration officials to pursue their long-held goal of overthrowing the Saddam Hussein regime in Iraq, using the “war on terror” as a cover for larger geopolitical ends.  On the very day of the 9/11 attacks, Secretary of Defense Donald Rumsfeld raised the question at a National Security Council meeting as to whether Iraq should be a priority on the U.S. hit list.  Three days later, Deputy Secretary of Defense Paul Wolfowitz went public, telling the press that the U.S. would wage “a campaign, not a single action” against terrorist groups and any governments that support them.

The war in Afghanistan, which began on October 7, 2001, served to establish the ostensible legitimacy of military responses to the 9/11 attacks.  According to former FBI Special Agent Ali Soufan, “Taking down the Taliban regime, and taking down Afghanistan, was just a step for some people in Washington to go to another war, and it’s in Iraq . . . [a] country that had nothing to do with 9/11.”

The war in Afghanistan was avoidable.  Although bin Laden had been a guest of the Taliban government since being expelled from Sudan in 1996, the Taliban had not participated in the planning or implementation of the 9/11 attacks, and they did not endorse the terrorist actions afterward.   Indeed, the chief spokesperson for the Taliban at the time, Foreign Minister Wakeel Ahmed Mutawakel, told the Arab television network Al Jazeera, “We denounce this terrorist attack, whoever is behind it.”

Bin Laden had curried favor with the Taliban supreme leader, Mullah Mohammed Omar, by funding construction projects and recruiting international jihadists to fight against the Taliban’s internal enemies.  There were nonetheless many Taliban leaders who wanted to get rid of him, especially after the United Nations imposed economic sanctions on Afghanistan in November 1999 due to al Qaeda’s international terrorist activities.

On October 14, 2001, Afghanistan’s deputy prime minister, Haji Abdul Kabir, told reporters, “If the Taliban is given evidence that Osama bin Laden is involved” and the bombing campaign is stopped, “we would be ready to hand him over to a third country,” adding that it must be a state that would never “come under pressure from the United States.”   The Bush administration refused all conditions.  “There’s no need to discuss innocence or guilt.  We know he’s guilty,” President Bush told reporters.

Even assuming that negotiations would have failed and that U.S. military actions to remove the Taliban from power were justified, there were still opportunities to avoid a protracted war.  At a Pentagon press briefing on November 19, Rumsfeld was asked: “Mr. Secretary, we’re getting reports that Mullah Mohammed Omar is trying to negotiate a surrender from Kandahar – surrender for himself, the Taliban, including those now being encircled by Northern Alliance forces at Kunduz.  Is that true?  And if so, what are the terms of the surrender the United States will accept?” Rumsfeld curtly replied, “The United States is not inclined to negotiate surrenders.”

This dismissive attitude carried over into the United Nations-sponsored conference in Bonn, Germany, where a new Afghan central government was formed in early December 2001. According to Carter Malkasian, a civilian Pentagon adviser with firsthand experience in Afghanistan, “Rumsfeld vetoed any peace with the Taliban. He also sent a private warning to Karzai that any deal would be against U.S. interests.”

The quick military victory over the Taliban by Northern Alliance forces backed by overwhelming U.S. air power was greeted in the U.S. as a phenomenal success, but it was not a victory over al Qaeda.  Indeed, in December 2001 bin Laden and his top aides slipped across the border into Pakistan, leaving Afghanistan largely free of the terrorist group.  The Taliban, as such, became the replacement “terrorists” for the absent al Qaeda fighters.

For some twenty years, tens of thousands of U.S. troops were sent to Afghanistan to buoy up the central government in Kabul.  They fought, not against terrorists threatening the United States, but against a reconstituted Taliban insurgency; against local Afghans enraged by U.S. military assaults (air strikes, night raids, and drone attacks) that killed an estimated 71,000 civilians; and against a corrupt kleptocracy in Kabul.

John Sopko, the Special Inspector General for Afghanistan Reconstruction (SIGAR), noted in his August 2021 report, What We Need to Learn: Lessons from Twenty Years of Afghanistan Reconstruction, that “in Afghanistan, the U.S. government refused opportunities to reconcile with the defeated Taliban and declined to implement an inclusive, post-conflict peace process, so the Taliban soon rebuilt itself as a powerful insurgency.”

As for Iraq, the Bush administration conducted a virulent propaganda campaign to convince the American people that Saddam Hussein must be removed by force.  Bush and company repeatedly referred to Hussein as “evil,” thereby establishing the basis for fearful forecasts that if the Iraqi leader were left to his own devices, he would acquire weapons of mass destruction and either attack the United States or pass them on to terrorists.  No such weapons were ever found.

The U.S. invasion of Iraq in March 2003 prompted White House counterterrorism czar Richard A. Clarke to resign.  In his book, Against All Enemies: Inside America’s War on Terror (2004), he wrote, “In Muslim countries, the U.S. invasion of Iraq increased support for al Qaeda and radical anti-Americanism.  Elsewhere, we were now seen as a super-bully more than a superpower, not just for what we did but for the way we did it, disdaining international mechanisms that we would later need.”

The U.S. war in Iraq did not fail in the same way as the war in Afghanistan, when the Taliban ousted the U.S.-backed government in Kabul in August 2021.  The Iraqi mission failed politically – from the vantage point of Washington policymakers – as the elected leadership of Iraq cozied up to Iran rather than to the U.S.  The Bush administration had envisioned a client state, more or less, in which Iraq would be a dependable oil producer for the West, an ally of the U.S. in international affairs, and a subsidiary military partner, allowing the U.S to establish bases and project its power across the Middle East.  Instead, as noted in an extensive U.S. Army study of the Iraq war published in 2019, “Iran appears to be the only victor.”