We Know About Fire. What Does Ice Tell Us About Humanity's Past and Future?

Fred Hogge is the author of Of Ice and Men: How We've Used Cold to Transform Humanity. 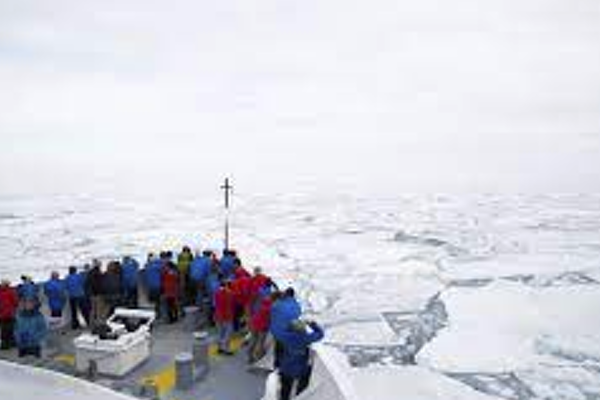 On August 22, 2018, a container ship called the Venta Maersk sailed from Vladivostok to St. Petersburg. Ordinarily, this would be something unremarkable, a journey of 14,600 nautical miles around South East Asia and the Indian subcontinent. Instead, she sailed through the Arctic.

Even as little as two years before, the shipping company Maersk believed such a voyage to be impossible, at least until the end of this decade. And yet, by 2020 over 32 million tons of freight were shipped along the so-called Northern Sea Route, while in February 2021 a Russian gas tanker called the Christophe de Margerie completed the trip in winter.

Given the enormous resources that were channeled into charting this route over the top of Russia and, perhaps more famously, into navigating the North West Passage above Canada and the United States in the 19th century, one might have thought that these achievements would have received a little more attention, not only because of the tales of adventure and death these expeditions unleashed, but because there are arguably few better examples of how man-made climate change has made possible something that was previously unthinkable.

That the Northern Sea Route now lies open to modern trade is just one way in which humanity’s use of ice has changed our world and our environment.

The ice we store in our refrigerators seems unremarkable. It is an every day thing. We use it to cool our drinks and store our food, and we don’t even think about it or its consequences for us as an animal.

And yet our use of the cold has arguably changed us as much as the discovery of fire.

It has been written that the use of fire to cook food is one of the defining features of humanity. It has allowed us to nourish ourselves better, promoting human survival and the evolution of our brains, ultimately creating the species we are today.

Though we scarcely recognize it, our use of the cold is doing something similar. And we haven’t noticed.

Like its counterpart fire, the cold’s key asset to us lies in nourishment. Our ability to store food for longer, to ship better quality meat and vegetables around the world via the medium of cool chains, has allowed the human population to explode.

In 1913, the year of the domestic refrigerator’s invention, our global numbers stood at just under 2 billion people. Today, there 8 billion of us, a number that is expected to rise to over 9 billion over the next 20 years, and this is largely down to the advances in food and medical technologies made available to us by our harnessing of the cold.

As astounding as the achievements are, they come with a concomitant problem. Those vast numbers of us place huge pressure on the finite resources of our small planet.

There is only so much to go around. And yet we hunger for more. More food, more comfort, more fuel. Our entire economic system is predicated on these desires, upon growth. And this raises a question: how can we sustain long-term growth, forever, in a finite world? Our failure to even to think that we might need to try something different in this sphere has profound consequences for our resource-limited environment that endanger our very survival.

These are worth examining, because a navigable Arctic is just one of the real world illustrations of potentially irreversible climate that we can see.

Among other things, the loss of its whiteness ensures less of the sun’s radiation is reflected back into space. And it is a deft example of how climate change happens in the same way as Mike Campbell, in Ernest Hemmingway’s The Sun Also Rises, went bankrupt: gradually and then suddenly. In other words, a bell curve. And once we start losing ice suddenly, which we are now beginning to see, it will be too late to solve the problem.

In our current, accepted data modelling, this means we tend to start thinking of the additional consequence of our actions: rising sea levels. Some 10% of our population lives in low lying coastal regions. In map projections produced by NASA which predict a rise of up to 30cm by 2050, we see a country like the Maldives will be completely submerged, in addition to the loss of significant areas of the United States, not to mention large portions of the United Kingdom, including most of London.

But, while we see ice loss most evidently in the Arctic, it will not be the cause of our woes. The ice there floats, displacing ocean volume in broadly equal quantities to its current mass. (Actually, salt water, is denser than fresh, so it will have some effect, but in short, this water is already in the water.)

It is the ice in Greenland, the Antarctic, upon the land masses within the Arctic Circle and, indeed, the Himalayas that we have to worry about. And the loss of these repositories will affect us in ways that are not immediately apparent.

In the Himalayas, we have already seen over the last two years the devastating consequences of calving glaciers. Most notably on February 7, 2021, one sent a surge of melt water down the Dhauligana River, destroying roads, bridges and hydroelectric plants. On the day itself, it killed twenty-six people and left a further 170 missing.

Death and destruction notwithstanding, Himalayan glaciers feed six great rivers that supply the water needs of one and a half billion people in India, China, Afghanistan, Pakistan and South East Asia. The current upstream damming of the Mekong alone has revealed the massive environmental damage that even a comparatively small loss in flow to just one of these systems causes.

But even mass thirst, flooding and population displacement seem nothing compared to another more troubling issue we face if we lose ice from Greenland, the Antarctic, or both – a phenomenon called “post-glacial rebound”.

It works like this: the solid ground we walk upon is not as solid as it seems. In fact, it floats upon a 2,000km thick ocean of molten metal. Upon that there lies a layer of molten rock which behaves sometimes like a solid, at other times like a liquid, until finally we reach the planet’s crust. This is generally held to be about 5km thick at its thinnest, in the ocean, and much thicker if we think about a mountain range. But it is brittle. From time to time, the tectonic plates that support our continents move, creating earthquakes, and I mention this thing we all know simply to put the image of a bad one – including those this century like the one under the Indian Ocean in 2004, or the one in Kashmir in 2005, Szechuan in 2008, Haiti in 2010 ­– in your head.

The ice in Greenland and the Antarctic is, in some places, up to three kilometres thick. The huge mass of it pushes both these vast land masses down into the fluid rock and metal on which they float. And their absence will cause them to bob up.

Now that will be some earthquake….

Many unknowns surround this notion, just two of them being how fast the ice will go in each place, and how fast the land masses will then move. But, with our species’ continued inaction on matters of climate, be it carbon dioxide or methane emissions into the atmosphere, such drastic global change seems increasingly inevitable.

Which means we, as a species, as supercharged by ice as we have been, face troubling questions. Are we prepared to take hard action to protect our environment? How far are we prepared to go, and how fast?

I often think our inaction stems from the idea that, as an individual, it is impossible to imagine how we can have an effect on something as big as a planet. The only way we can begin to perceive it is to acknowledge just how many of us there are. Eight billion has a massively bigger effect than one, a concept that anyone who’s ever listened to Frank Sinatra’s song High Hopes should be able to grasp.

What faces us, from melting ice to coastal flooding to post-glacial rebound, is our survival.

They need to stop.

Because Planet Earth is going to be just fine. Whatever we do to it, it will keep on doing what it always has, spinning on its axis every day, and wending its way around the sun each year. It will go on.

But we won’t. And we need to wake up, fast, and globally, to the fact that for all our brilliance in harnessing the powers of the cold (and many other things) to our advantage, that the results of ice use – the resulting nutritional and medical motor that it has put beneath us, causing our numbers to explode out of all proportion with the finite resources we have access to – has presented us with an existential crisis: that of our species’ very survival.

If we do not meet this crisis head on, the consequences of our inaction will be incalculable. And forever.