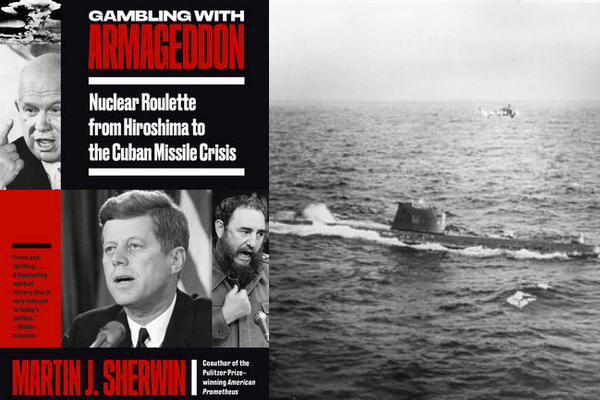 A US helicopter flies above the Soviet submarine B-59 during the blockade of Cuba, October 28-29, 1962

The development and the deployment of nuclear weapons are usually based on the assumption that they enhance national security.  But, in fact, as this powerful study of nuclear policy convincingly demonstrates, nuclear weapons move nations toward the brink of destruction.

The basis for this conclusion is the post-World War II nuclear arms race and, especially, the Cuban missile crisis of October 1962.  At the height of the crisis, top officials from the governments of the United States and the Soviet Union narrowly avoided annihilating a substantial portion of the human race by what former U.S. Secretary of State Dean Acheson, an important participant in the events, called “plain dumb luck.”

The author of this cautionary account, Martin Sherwin, who died shortly after its publication, was certainly well-qualified to tell this chilling story.  A professor of history at George Mason University, Sherwin was the author of the influential A World Destroyed: Hiroshima and Its Legacies and the co-author, with Kai Bird, of American Prometheus: The Triumph and Tragedy of J. Robert Oppenheimer, which, in 2006, won the Pulitzer Prize for biography.  Perhaps the key personal factor in generating these three scholarly works was Sherwin’s service as a U.S. Navy junior intelligence officer who was ordered to present top secret war plans to his commander during the Cuban missile crisis.

In Gambling with Armageddon, Sherwin shows deftly how nuclear weapons gradually became a key part of international relations.  Although Harry Truman favored some limitations on the integration of these weapons into U.S. national security strategy, his successor, Dwight Eisenhower, significantly expanded their role.  According to the Eisenhower administration’s NSC 162/2, the U.S. government would henceforth “consider nuclear weapons as available for use as other munitions.”  At Eisenhower’s direction, Sherwin notes, “nuclear weapons were no longer an element of American military power; they were its primary instrument.”

Sherwin adds that, although the major purpose of the new U.S. “massive retaliation” strategy “was to frighten Soviet leaders and stymie their ambitions,” its “principal result . . . was to establish a blueprint for Nikita Khrushchev to create his own ‘nuclear brinkmanship’.”  John F. Kennedy’s early approach to U.S. national security policy―supplementing U.S. nuclear superiority with additional conventional military forces and sponsoring a CIA-directed invasion of Cuba―merely bolstered Khrushchev’s determination to contest U.S. power in world affairs.   Consequently, resumption of Soviet nuclear weapons testing and a Soviet-American crisis over Berlin followed.

Indeed, dismayed by U.S. nuclear superiority and feeling disrespected by the U.S. government, Khrushchev decided to secretly deploy medium- and intermediate-range ballistic nuclear missiles in Cuba.  As Sherwin observes, the Soviet leader sought thereby “to protect Cuba, to even the balance of nuclear weapons and nuclear fear, and to reinforce his leverage to resolve the West Berlin problem.”  Assuming that the missiles would not be noticed until their deployment was completed, Khrushchev thought that the Kennedy administration, faced with a fait accompli, would have no choice but to accept them.  Khrushchev was certainly not expecting a nuclear war.

But that is what nearly occurred.   In the aftermath of the U.S. government’s discovery of the missile deployment in Cuba, the Joint Chiefs of Staff demanded the bombing and invasion of the island. They were supported by most members of ExComm, an ad hoc group of Kennedy’s top advisors during the crisis.  At the time, they did not realize that the Soviet government had already succeeded in delivering 164 nuclear warheads to Cuba and, therefore, that a substantial number of the ballistic missiles on the island were already operational.  Also, the 42,000 Soviet troops in Cuba were armed with tactical nuclear weapons and had been given authorization to use them to repel an invasion.  As Fidel Castro later remarked:  “It goes without saying that in the event of an invasion, we would have had nuclear war.”

Initially, among all of Kennedy’s advisors, only Adlai Stevenson, the U.S. ambassador to the United Nations, suggested employing a political means―rather than a military one―to secure the removal of the missiles.  Although Kennedy personally disliked Stevenson, he recognized the wisdom of his UN ambassador’s approach and gradually began to adopt his ideas.  “The question really is,” the president told his hawkish advisors, “what action we take which lessens the chance of a nuclear exchange, which obviously is the final failure.”  Therefore, Kennedy tempered his initial impulse to order rapid military action and, instead, adopted a plan for a naval blockade (“quarantine”) of Cuba, thereby halting the arrival of additional Soviet missiles and creating time for negotiations with Khrushchev for removal of the missiles already deployed.

U.S. military leaders, among other ostensible “wise men,” were appalled by what they considered the weakness of the blockade plan, though partially appeased by Kennedy’s assurances that, if it failed to secure the desired results within a seven-day period, a massive U.S. military attack on the island would follow.  Indeed, as Sherwin reveals, at the beginning of October, before the discovery of the missiles, the U.S. Joint Chiefs of Staff were already planning for an invasion of Cuba and looking for an excuse to justify it.

Even though Khrushchev, like Kennedy, regarded the blockade as a useful opportunity to negotiate key issues, they quickly lost control of the volatile situation.

For example, U.S. military officers took the U.S.-Soviet confrontation to new heights.  Acting on his own initiative, General Thomas Power, the head of the U.S. Strategic Air Command, advanced its nuclear forces to DEFCON 2, just one step short of nuclear war―the only occasion when that level of nuclear alert was ever instituted.  He also broadcast the U.S. alert level “in the clear,” ensuring that the Russians would intercept it.  They did, and promptly raised their nuclear alert level to the same status.

In addition, few participants in the crisis seemed to know exactly what should be done if a Soviet ship did not respect the U.S. blockade of Cuba.  Should the U.S. Navy demand to board it?  Fire upon it?  Furthermore, at Castro’s orders, a Soviet surface-to-air battery in Cuba shot down an American U-2 surveillance flight, killing the pilot.  Khrushchev was apoplectic at the provocative action, while the Kennedy administration faced the quandary of how to respond to it.

A particularly dangerous incident occurred in the Sargasso Sea, near Cuba.  To bolster the Soviet defense of Cuba, four Soviet submarines, each armed with a torpedo housing a 15-kiloton nuclear warhead, had been dispatched to the island.  After a long, harrowing trip through unusually stormy seas, these vessels were badly battered when they arrived off Cuba.  Cut off from communication with Moscow, their crews had no idea whether the United States and the Soviet Union were already at war.

All they did know was that a fleet of U.S. naval warships and warplanes was apparently attacking one of the stricken Soviet submarines, using the unorthodox (and unauthorized) tactic of forcing it to surface by flinging hand grenades into its vicinity.  One of the Soviet crew members recalled that “it felt like you were sitting in a metal barrel while somebody is constantly blasting with a sledgehammer.”  Given the depletion of the submarine’s batteries and the tropical waters, temperatures ranged in the submarine between 113 and 149 degrees Fahrenheit.  The air was foul, fresh water was in short supply, and crew members were reportedly “dropping like dominoes.”  Unhinged by the insufferable conditions below deck and convinced that his submarine was under attack, the vessel’s captain ordered his weapons officer to assemble the nuclear torpedo for action.  “We’re gonna blast them now!” he screamed.  We will die, but we will sink them all―we will not become the shame of the fleet.”

At this point, though, Captain Vasily Arkhipov, a young Soviet brigade chief of staff who had been randomly assigned to the submarine, intervened.  Calming the distraught captain, he eventually convinced him that the apparent military attack, plus subsequent machine gun fire from U.S. Navy aircraft, probably constituted no more than a demand to surface.  And so they did.  Arkhipov’s action, Sherwin notes, saved not only the lives of the submarine crew, “but also the lives of thousands of U.S. sailors and millions of innocent civilians who would have been killed in the nuclear exchanges that certainly would have followed from the destruction” that the “nuclear torpedo would have wreaked upon those U.S. Navy vessels.”

Meanwhile, recognizing that the situation was fast slipping out of their hands, Kennedy and Khrushchev did some tense but serious bargaining.  Ultimately, they agreed that Khrushchev would remove the missiles, while Kennedy would issue a public pledge not to invade Cuba.  Moreover, Kennedy would remove U.S. nuclear missiles from Turkey―reciprocal action that made sense to both men, although, for political reasons, Kennedy insisted on keeping the missile swap a secret.  Thus, the missile crisis ended with a diplomatic solution.

Ironically, continued secrecy about the Cuba-Turkey missile swap, combined with illusions of smooth Kennedy administration calibrations of power spun by ExComm participants and the mass communications media, led to a long-term, comforting, and triumphalist picture of the missile crisis.  Consequently, most Americans ended up with the impression that Kennedy stood firm in his demands, while Khrushchev “blinked.”  It was a hawkish “lesson”―and a false one.  As Sherwin points out, “the real lesson of the Cuban missile crisis . . . is that nuclear armaments create the perils they are deployed to prevent, but are of little use in resolving them.”

Although numerous books have been written about the Cuban missile crisis, Gambling with Armageddon ranks as the best of them.  Factually detailed, clearly and dramatically written, and grounded in massive research, it is a work of enormous power and erudition.  As such, it represents an outstanding achievement by one of the pre-eminent U.S. historians.

Like Sherwin’s other works, Gambling with Armageddon also grapples with one of the world’s major problems:  the prospect of nuclear annihilation.  At the least, it reveals that while nuclear weapons exist, the world remains in peril.  On a deeper level, it suggests the need to move beyond considerations of national security to international security, including the abolition of nuclear weapons and the peaceful resolution of conflict among nations.

Securing these goals might necessitate a long journey, but Sherwin’s writings remind us that, to safeguard human survival, there’s really no alternative to pressing forward with it.