Is This the Black Activist Everybody Forgot?

by Jeffrey B. Perry 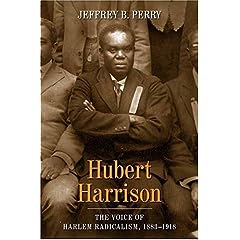 As we move forward under our first Black president in a political and economic climate marred by war, a “second Great Depression,” and deep and profound racial inequality, there is a growing interest in Hubert Harrison, the race- and class-conscious “intellectual giant” of the World War I era.

Harrison (1883-1927) was a brilliant writer, orator, educator, critic, and political activist and a self-described “radical internationalist.” He played unique, signal roles in the largest class-radical movement (socialism) and the largest race-radical movement (the “New Negro”/ Garvey movement) of his era. He was the leading Black activist and theoretician in the Socialist Party during its 1912 heyday, he founded the first organization (the Liberty League) and the first newspaper (The Voice) of the “New Negro Movement” in 1917, and he was reportedly the first regular Black book reviewer in history. His views on race and class profoundly influenced a generation of “New Negro” activists, and he was the principal radical influence on both A. Philip Randolph and Marcus Garvey. Considered more race conscious than Randolph and more class conscious than Garvey, Harrison is a key link in the ideological unity of the two great trends of the Black Liberation Movement--the labor and civil rights emphasis associated with Randolph and Martin Luther King Jr., and the race and nationalist emphasis associated with Garvey and Malcolm X.

Historian Joel A. Rogers in World’s Great Men of Color described Harrison as “the foremost Afro-American intellect of his time” and emphasized (amid chapters on Booker T. Washington, W. E.B. Du Bois, William Monroe Trotter, and Marcus Garvey) that “none of the Afro-American leaders of his time had a saner and more effective program.” A. Philip Randolph considered Harrison “the father of Harlem Radicalism.” The bibliophile and library developer Arthur Schomburg, with his deep sense of history, presciently eulogized at Harrison’s massive Harlem funeral that he was “ahead of his time.”

Despite such praise from contemporaries, Harrison is not widely known. Reasons for this include that he was Black, Caribbean (born in St. Croix), working class, an immigrant, and poor (all groups historically underrepresented); he was a proponent of science and evolution over religion; he was forthright in the expression of his opinions and his criticisms stung many who might have helped preserve his memory; he had no long-lasting organizational ties; and he died young (at age forty-four) and was neither martyred (like Malcolm and Martin) nor productive for additional decades (like Du Bois). Most importantly, Harrison has not been better known because he was radical on matters of race and class in America.

Now, however, Harrison’s life and ideas are attracting considerable attention because of the availability of the Hubert H. Harrison Papers at Columbia University’s Rare Book and Manuscript Library (complete with a 102-page Finding Aid) and the library’s plans to make his writings available online; Columbia University Press’s November 2008 publication of Hubert Harrison: The Voice of Harlem Radicalism, 1883-1918 (the first volume of a two-volume biography); and Wesleyan University Press’s decision to keep in print A Hubert Harrison Reader (2001). Harrison is also receiving high praise from scholars and writers such as Cornel West, Arnold Rampersad, David Levering Lewis, Manning Marable, Joyce Moore Turner, Winston James, Gary Okihiro, Christopher Phelps, Komozi Woodard, Bill Fletcher Jr., and David Roediger, and there has been a welcome increase in university, Internet, and community-based discussion of his life.

One area where this is the case is in the realm of “ideas.” His comments on “democracy” are an example. He maintained that “politically, the Negro is the touchstone of the modern democratic idea” [a touchstone is a black stone used to test the purity of gold] and then foreshadowed the role of the Civil Rights struggle as a catalyst for societal change when he wrote that true democracy and equality imply “a revolution startling to even think of.” His explanation that “as long as the Color Line exists, all the perfumed protestations of Democracy on the part of the white race” are “downright lying” and that “the cant of ‘Democracy’” is “intended as dust in the eyes of white voters” preceded such important historical concepts as Du Bois’s “American Blindspot” (Black Reconstruction, 1935) and the “white blindspot” (1967) of Theodore W. Allen (author of The Invention of the White Race). His statement that “during [World War I] the idea of democracy was widely advertised, . . . mainly as a convenient camouflage behind which competing imperialists masked their sordid aims . . . [and] those who so loudly proclaimed and formulated the new democratic demands never had the slightest intention of extending . . . ‘democracy’ ” resonates strongly in the era of George W. Bush.

Harrison also offers remarkably fertile ground for historical research. His approximately 700 available writings offer an articulate race- and class-conscious working-class perspective in areas such as Black history; politics and social activism; literary criticism; and journalism. These writings encourage movement beyond the Booker T. Washington vs. Du Bois debate and the evolutionary vs. revolutionary debate among socialists. They also encourage reassessment of the “Harlem Renaissance” and “New Negro” concepts. Harrison challenged the “Renaissance” idea on grounds of its willingness to take “standards of value ready-made from white society” and on its claim to being a significant new rebirth. He founded the “New Negro Movement” in 1917 and edited the New Negro in 1919, well before Alain Locke’s more middle-class, arts-based, New Negro publication of 1925.

Harrison is also entering the political discussion. On August 14, 2008, with the outcome of the presidential election still in doubt, the writer-activist Amiri Baraka issued an “Open Letter” that called on people “to understand that the logic and strength of [Barack] Obama’s candidacy is the 21st century manifestation of the Civil Rights and Black Liberation Movements” and urged support of Obama. Baraka, knowing the importance of the struggle against white supremacy to social change in America, and looking ahead to the necessity of grassroots organizing during the Obama presidency, emphasized the need for genuine democracy and cited Harrison’s words from 1911 about “the touchstone” and about “a revolution startling to even think of.”

Obama has already responded positively to two economic struggles that Harrison would have supported: the 240 (mostly Black and Latin) UE workers who sat in at a factory in Chicago and the 4,800 (mostly Black and Latin) workers at Smithfield Packing in Tar Heel, North Carolina, who won a hard-fought, fifteen-year struggle to be represented by the UFCW. Obama is now planning to spend billions of dollars on job creation to counter the deepening economic crisis, and he will hopefully do so with a Harrison-like anti-white-supremacist-antenna and in light of the historical research of scholars like Ira Katznelson (When Affirmative Action Was White) and others who critically depict the discriminatory, white-supremacist shaping of FDR’s “New Deal” programs and policies.

In the recent presidential election millions of people demanded and voted for “change.” On Barack Obama’s Web site, change.gov, he has asked for people to offer their thoughts on what changes are needed. It is to be expected that in such a political and intellectual climate there will be increased attention paid to important thinkers and advocates of change, particularly those whose writings challenge white supremacy.

Given this political and intellectual climate and the newly available Harrison material, interest in the race- and class-conscious Hubert Harrison will continue to grow.