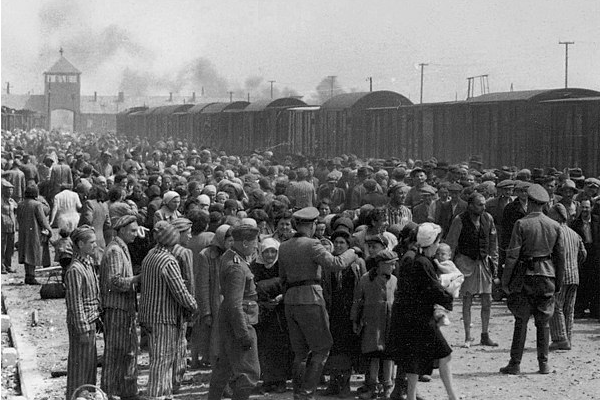 I am not a Holocaust denier. Of course, the Holocaust happened. It remains one of the most important events of the 20th century, of modern history, perhaps of human history.

But if someone never heard of the Holocaust, doesn’t know that it happened, then history doesn’t matter. The event is wiped out of history, not by denial, but by ignorance.

Some of the most populous states passed laws between 1985 and 1995, covering nearly one-third of the US population, requiring the teaching of the Holocaust in public schools. In each case, the law specified that knowledge about the Holocaust ought to be connected to human rights issues. Prejudice and discrimination must be identified with genocide, leading to an emphasis on “the personal responsibility that each citizen bears to fight racism and hatred whenever and wherever it happens” (New Jersey) and “encouraging tolerance of diversity” (Florida). As the wording of these laws demonstrates, teaching about the Holocaust is a political act. Because encouraging diversity and fighting prejudice are politically controversial, Holocaust education is a partisan political act, and always has been.

Despite such laws, ignorance about the Holocaust is widespread in America, especially among young people. The millennial generation should have been exposed to Holocaust teaching in schools, especially in those states that require it. But they know little about the Holocaust. Two-thirds of millennials do not know what Auschwitz was; half cannot name one concentration camp; about 40% believe that fewer than 2 million Jews were murdered; 20% are not sure if they have ever heard of the Holocaust.

There is overwhelming popular support for more teaching about the Holocaust. The same survey that showed the gaps in knowledge also found that 93% of Americans agreed that “All students should learn about the Holocaust while at school.”

But there are political problems for some in the implications of Holocaust history. The focus on human rights, the disastrous consequences of racial prejudice, the victimization of other minorities including gays, the hyper-nationalism of fascism and its deadly attacks on all leftists all can lead to a critical stance against typical conservative political positions, and in particular, against current policies of the Republican Party. Absorbing the moral significance of the Holocaust might well lead students to believe that monuments to Confederate white supremacy should be taken down, that denigration of immigrants is wrong, that loud claims that America is the greatest country ever sound like “Deutschland über alles”.

Holocaust deniers, avowed Nazis, self-proclaimed antisemites, and supporters of white supremacy appear occasionally on the fringes of the Republican Party, or even among Republican congressmen. Some Republican candidates in the recent midterm elections used antisemitic images against their Jewish opponents. David Duke, former KKK leader and former Republican legislator in Louisiana, said about Trump’s 2016 election, “This is one of the most exciting nights of my life.”

American conservatives sometimes use the Holocaust to spread inappropriate partisan messages. On Holocaust Remembrance Day two weeks ago, the Harris County (Texas) Republican Party posted a Facebook message with a yellow star-shaped badge and these words: “Leftism kills. In memory of the 6 million Jews lost to Nazi hatred in the name of National Socialism. We will never forget.” The Texas Republicans explained that they were connecting the name of the National Socialist Party with “leftism”, even though the extreme right-wing Nazis killed every socialist they could get their hands on.

The use of the Holocaust to argue against restrictions on gun ownership has a long history. Wayne LaPierre, executive director of the NRA, Ben Carson when he was a Republican candidate for President, and the senior Republican in the House have all claimed that Jews were killed because they had not armed themselves.

Some people on the left also have trouble with teaching the Holocaust. Because the Israeli government and many Jews across the world have used the Holocaust as a justification for the existence of Israel, supporters of the rights of Palestinians sometimes claim that there is too much emphasis on the Holocaust.

Sometimes leftists are criticized, because they can be linked with other people who would like to see less attention paid to the Holocaust. For example, the two women who just became the first Muslim women elected to Congress, Rashida Tlaib and Ilhan Omar, are often accused by Republicans of being antisemitic, because of their criticisms of Israeli policy. Their comments do sometimes veer towards condemnations of Jews as a group, and Omar just had to apologize for some of her tweets. But their criticisms of Israel are echoed by many Jews. I find such conservative attacks misleading, but I am one of those Jews who is critical of Israeli treatment of Palestinians.

Nevertheless there are some on the left who do not wish to push more Holocaust education, because more sympathy for Jews can lead to support for Israeli occupation policies and discrimination against Palestinians.

But the facts of the Holocaust are clear and they lead inexorably to important moral and political conclusions, which can be discomforting to ideologues of the right and left. Antisemitism has always been based on false ideologies, and it leads to discrimination and eventually murder, like all ethnic hatreds. Extreme nationalism is the twin of ethnic hatred, and leads to war. It is always important to juxtapose the authority of governments or leaders with basic moral precepts, to question authority.

Holocaust education is necessary. The Holocaust is one of the most significant events of our recent global past and was an important determinant of the contemporary European and Middle Eastern world. Its moral implications, lessons if you will, have universal significance. Learning about the Holocaust makes everyone uncomfortable. That is why we must keep teaching it.