Presidents Who Look Better or Worse by Comparison 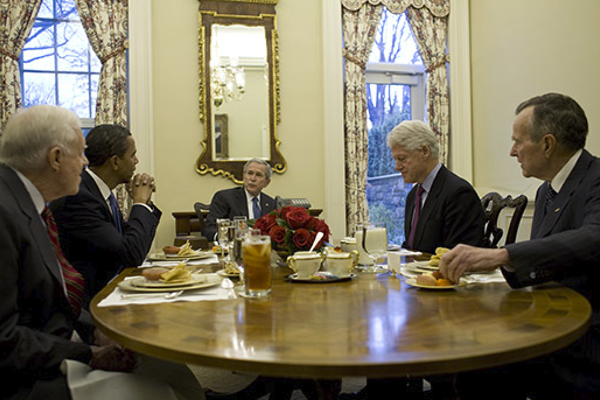 America has also had four presidents, who while not “failures,” are perceived as less successful and outstanding than the presidents before and after them.

The first such case in the first category is Abraham Lincoln (1861-1865), coming to office after James Buchanan (1857-1861), and succeeded by Andrew Johnson (1865-1869). Lincoln has certainly been criticized by many scholars for his civil liberties violations during the Civil War, and for the often failed military leadership he had until later in the war.  His racial views have been seen with a critical eye by many, as well.  And yet, it is acknowledged by most historians and political scientists that Lincoln is our greatest president, despite his shortcomings.

James Buchanan is ranked in most scholarly polls as our worst president, as he presided over the disintegration of the nation in the late 1850s, leading up to the secession of the southern states in his last months in office. He further proved unwilling to challenge southern states who claimed the right to seize US military property in the interim four months between the election and the inauguration on March 4, 1861.

Andrew Johnson, an accidental president due to the assassination of Lincoln, proved to be a disaster in the making, unable and unwilling to work with the Republican congress on Reconstruction policy, and faced the first presidential impeachment trial.  He also possessed one of the worst personalities of any president, constantly confrontational and highly condemnatory of all critics, and hostile to racial equality.  Johnson is ranked either just above Buchanan or, alternatively, as the absolute nadir of the presidency.

Obama faced great opposition in his two terms, but had major accomplishments despite that reality, and is perceived as a president who overcame the Great Recession he inherited, saved the auto industry, and promoted reform in health care, the environment, and foreign policy, and also utilized executive orders to advance many initiatives when prevented by the opposition from making progress through Congress.  His ranking has been Number 12 in the C-SPAN Presidential Poll of 2017, and Number 8 in the American Political Science Association Poll of 2018, and he is highly ranked in public opinion polls of everyday Americans.

George W. Bush has been low-ranked, mostly in the bottom ten of presidents, or at best the bottom third, due to tragedies of the prolonged wars in Iraq and Afghanistan, as well as the poor response to Hurricane Katrina, and the collapse of the American economy in 2008-2009 into what has been termed the Great Recession, the worst economic downturn since the Great Depression of the 1930s.

Donald Trump has not been formally ranked yet, but after one year in office, he was rated in the bottom of the American Political Science Association poll, moving Buchanan and Johnson up a peg in each case.  With the reality of the tumultuous four years of Trump, leading to two impeachments of the president in just over one year; plus the reality that he never won the popular vote in 2016 or 2020, and refused to accept the election results of the 2020 presidential election, leading to the US Capitol Insurrection of January 6, 2021, it seems likely that for the short run, as well as the long run, Trump will languish in the basement of rankings, or at most but not likely, be just above Buchanan and Johnson.  This assessment must also include the high level of corruption and incompetence, and the botched reaction to the COVID-19 pandemic, the greatest public health crisis in a century.

The cases where a president’s reputation has been diminished due to comparison of presidents before and after him does not mean these four presidents to be discussed were as horrendous as those surrounding Abraham Lincoln and Barack Obama, but the rankings of the following presidents do suffer by comparison.

The first such case is John Adams (1797-1801), between George Washington (1789-1797) and Thomas Jefferson (1801-1809).  Adams only had one term, was defeated for reelection, and is harshly criticized for the Alien and Sedition Acts of 1798.  But he still ranks in the top 20 of presidents, while Washington is usually ranked as Number One or Two, and Jefferson usually around Number Seven for their contributions and accomplishments in their time as presidents.

The second such case is James Madison (1809-1817), between Thomas Jefferson (1801-1809) and James Monroe (1817-1825).  Madison presided over the failed War of 1812, which included the British attack on the US Capitol and the White House in August 1814. There is a perception that Madison, despite his great historical accomplishments before his Presidency, had been weak and subjected to pressure by the “War Hawks”, who recklessly wanted war with Great Britain to gain all of Canada, a false effort. So Madison is rated in most polls near the bottom of the top 20, while James Monroe is rated higher with his foreign policy accomplishments.

The third such case is William Howard Taft (1909-1913), between Theodore Roosevelt (1901-1909) and Woodrow Wilson (1913-1921).  Taft had one term and was defeated for reelection, in a four way race with TR, Wilson, and Socialist Eugene Debs in 1912, and is the only president running for reelection to come in third, not second, in the popular vote (he claimed only twenty-three percent of the vote, and won 8 electoral votes).  Taft had promoted some progressive ideas in office and two progressive constitutional amendments, but had divided the Republican party, which was in disarray at the time. Taft also faced opposition from his predecessor, who had promoted him for the Presidency in 1908 but then turned vehemently against him.  Theodore Roosevelt had the best third party performance in American history.  Taft would go on to be Chief Justice of the Supreme Court in the 1920s, and would end up being ranked in the high to mid 20s as president. Roosevelt and Wilson, however, even with their shortcomings, would always rank higher, with TR often 4th or 5th, and Wilson, while slipping in recent scholarly estimation, still being number 11 in the C-SPAN Poll of 2017, after having regularly been in the top ten, and as high as 6th in earlier polls.

The fourth and last such case is George H.W. Bush (1989-1993), between Ronald Reagan (1981-1989) and Bill Clinton (1993-2001).  Bush had one term and was defeated for reelection in 1992, in a three way race with Bill Clinton and H. Ross Perot, who ran as an independent and took 19 percent of the vote, leaving Bush with only 37 percent of the popular vote, the second worst popular vote defeat of any sitting president. Only William Howard Taft, eighty years earlier, did worse.  Bush had been successful in promoting the Persian Gulf War against Saddam Hussein’s Iraqi regime, had promoted a significant civil rights law, the Americans With Disabilities Act of 1990, and had presided over a peaceful and stable end of the Cold War when the Berlin Wall came down in 1989, but he had been undermined by the Recession of 1992, just as an election year came on. So Bush is usually ranked at the bottom of the top 20 presidents, while Reagan is rated around Number 10, and Clinton is usually ranked in the top third of presidents, usually around Number 15.

So who is president before and after any president has in six cases had a big impact on their scholarly ranking in American history. Joe Biden has had an active first two months in office, and the odds look likely that Donald Trump will be another case of a president who makes his predecessor and successor both look even better by comparison.