Robin Lindley is a Seattle writer and features editor for the History News Network. His writing -- often interviews of historians, scholars, artists and other writers -- also has appeared in Crosscut, Writer’s Chronicle, Real Change, The Inlander, and other publications. For comments: robinlindley@gmail.com. 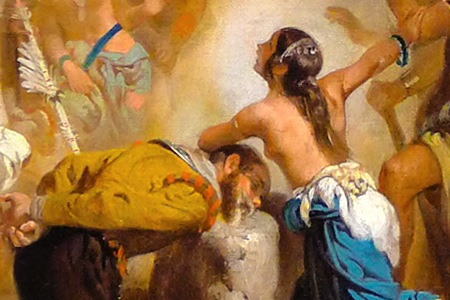 John Smith Saved by Pocahontas by Alonzo Chappel, circa 1865 via Wiki Commons.

Americans tell a tangled story of their past that has shaped the story itself, replete with inaccuracies, discrepancies and lingering myths. The versions of the story inevitably vary with the motives of the teller and the time of the telling.

Acclaimed historian and author Dr. Jill Lepore untangles some of these stories while humanizing the historical figures at center stage in her new book The Story of America: Essays on Origins (Princeton). In this collection of essays, she dissects American origin stories and, with clarity and wit, exposes exaggeration, prejudice and speculation while evaluating alternative stories and marshaling the facts.

In the introduction to her book, Dr. Lepore offers this view of her work as a writer who deals with the past: “Writing history requires empathy, inquiry, and debate. It requires forswearing condescension, cant, and nostalgia. The past isn’t quaint. Much of it, in fact, is bleak.”

This approach to writing informs Dr. Lepore’s essays in The Story of America, which range from a thoughtful examination of John Smith’s story of the founding of Jamestown, to consideration of the ever-evolving Constitution, the birth of the modern ballot, and the inaugural addresses of presidents from Adams to Obama. And she rescues from myth and illuminates the lives of Franklin, Jefferson, Paine, Poe, Jackson, Longfellow, and Darrow, among others.

Dr. Lepore’s The Story of America has been praised for its surprising historical revelations, original analysis, and vivid, accessible prose. For example, Prof. Cathy N. Davidson, Duke University, wrote: “Jill Lepore is one of our finest historians of the battle over the story called 'America,' which, as she says, is constantly being fought over and over. In this stunning collection of essays, Lepore makes the case that the rise of democracy is bound up with the history of its reading and writing. That history is conflicted, ragged, and contradictory but, in Lepore's capable hands, as gripping and compelling as a novel.”

Dr. Lepore is the David Woods Kemper '41 Professor of American History at Harvard University and chair of Harvard’s History and Literature program. She is also a staff writer for The New Yorker. Her next book, a biography of Jane Franklin, Benjamin Franklin’s sister, will be published in September. Her other books include The Mansion of Happiness: A History of Life and Death; The Whites of Their Eyes, a New York Times Book Review Editors’ Choice; New York Burning, winner of the Anisfield-Wolf Award for the best non-fiction book on race, and a finalist for the Pulitzer Prize; The Name of War, winner of the Bancroft Prize, the Ralph Waldo Emerson Prize, and the Berkshire Prize; and Blindspot, a mock eighteenth-century novel written jointly with the historian Jane Kamensky.

Dr. Lepore graciously responded by email to a series of questions about her new book and her work.

What is the overarching theme of The Story of America, your new collection of essays on American origins?

Dr. Jill Lepore: Oh, it really is a book of essays, each about American origins. Taken together, they’re meant to add up to something -- an argument about storytelling and a history of America -- but I didn’t write them with that in mind. The essays run chronologically, beginning with the founding of Roanoke and Jamestown and ending with Barack Obama’s inauguration. They’re meant to cover the length of American history, from the sixteenth century to the twenty-first.

The book’s got a theme -- the story of America, from the story John Smith told in his account of his travels to the story Obama told in his first inaugural address. The book makes lots of arguments, but one of them is that historians don’t pay as much attention to origins as they once did, which is too bad, because the question people who aren’t historians most earnestly want historians to answer is this: “How the hell did we get here?”

A goal of your essays is “to explain how history works.” Can you give a couple of examples of how your essays reveal the historian’s work?

Nearly every essay in the collection originally appeared in The New Yorker. A few began as book reviews. That’s true of the essay about Plymouth and the Pilgrims, which started out as a review of Nathaniel Philbrick’s 2006 book, Mayflower but became a reflection on the work of Samuel Eliot Morison, the American historian who edited William Bradford’s journal. “Let the facts speak!” was Morison’s motto. He never met a footnote he didn’t like. Philbrick, like many popular historians who work outside the academy, dispenses with footnotes and is interested, above all, in letting his story speak. The difference between Morison and Philbrick -- their methods and arguments and especially their standards of evidence -- reveals a great deal, I think, about how historians work.

History, as I write in the book’s introduction, is the art of making an argument by telling a story. A story without an argument fades into antiquarianism; an argument without a story risks pedantry. But, in the end, evidence is everything. One of the many essays in the book that didn’t start out as a book review is the essay about the Constitution. Instead, it’s a history of how the Constitution has been read over the centuries, not by lawyers or jurists or politicians but by everyone else. I wanted to explain the rise of what legal scholars call “popular constitutionalism.” I began with a question: when and why did “Read the Constitution” become a bumper sticker? I went to the archives to find out. Then I wrote an essay in which I tried to make an argument by telling a story about what I’d discovered. That might not be “how historians work,” but it’s how I work.

As you write, many readers did not understand that Benjamin Franklin’s aphorisms in The Way to Wealth were ironic and that Edgar Allan Poe’s horror stories were often satirical.  Why does irony and satire seem lost on many Americans? Are we too literal-minded?

Are irony and satire really lost on many Americans? I’m not so sure about that. People found Franklin very funny in the eighteenth century, and many of Poe’s readers, in the nineteenth century, found his stories, essays, and criticism wicked -- not funny but arch, and mean. Franklin was trying to delight his readers. Poe was trying to dupe them.

My aim, in writing about well-thumbed sources like Franklin’s proverbs and Poe’s tales, is to read them historically. You can read “The Tell-tale Heart” without knowing anything about Poe, and it pays: it scares. But I find it more fun to read that story while thinking about Poe writing it, when he did, the way he did, for reasons that had to do not just with his life but also with his times. Franklin, read that way, looks sneakier; Poe looks angrier.

Longfellow’s famous poem about the Paul Revere’s ride is notoriously inaccurate on the actual events, but you found that the poem’s purpose was not to record history but to call on Americans to oppose slavery on the eve of the Civil War.  What evidence led to your conclusion?

Longfellow’s letters to Charles Sumner are wonderfully illuminating on this account. I spent a lot of time thinking about a collection of poems about slavery that Longfellow wrote, at Sumner’s request, in 1842, the year both of them met Dickens. Longfellow shared Sumner’s political views but felt that it was for the best to leave politics to Sumner. That changed for Longfellow after Sumner was nearly beaten to death on the floor of the Senate.

My reading of “Paul Revere’s Ride” is an attempt to restore the poem to its moment in history, and in Longfellow’s life. It’s a biographical reading as much as a literary one. I wouldn’t say the evidence for my interpretation is overwhelming but I’d say it’s very strong. A piece I found awfully compelling came from Longfellow’s account books: the payments he made to free slaves.

It may surprise many that Thomas Paine, the author of Common Sense -- a radical call for Americans to declare independence from Britain -- was basically forgotten by the American people after the Revolutionary War and he died poor and alone. What happened?

I find the story of Paine’s life achingly sad. Too sad to revisit. You’ll have to read the essay.

You stress that writing history requires empathy and your essays are often moving as you describe, for example, the compassion of the people’s flawed attorney Clarence Darrow, or journalist Isabel Wilkerson telling the moving story of Ida Mae Gladney, an African American who fled the violence of the Jim Crow South to move North.  How does good history reflect empathy and how can history teach empathy?

Darrow once wrote an essay called “How to Pick a Jury.” “If a Presbyterian enters the jury box and carefully rolls up his umbrella, and calmly and critically sits down, let him go,” Darrow advised. “He is cold as the grave.” A defense attorney, Darrow thought, needs jurors who can identify with the accused. What Darrow was always looking for, in a juror, was a man whose “imagination will place him in the dock; really, he is trying himself.” History works the same way. History, like literature, asks us to imagine the lives of others. That requires empathy. Nevertheless, ordinarily, very little attention is given to empathy in the writing of history.

I wrote an article once, called “Just the Facts, Ma’am,” about how that happened, how empathy, sympathy, and, really, passion of any sort, came to be forbidden in the writing of history. I find that troubling. Passion can be crippling. But passionlessness, well, passionlessness is deadening.

You are an esteemed historian and storyteller.  How does your journalistic writing for The New Yorker compare with your academic writing?

I guess I probably do write differently for different audiences although exactly how is difficult to say. I find magazine writing fascinating in much the same way that I find teaching fascinating. Knowing something is one thing, explaining it is another. To be honest, I am just grateful to have the chance to try to figure out how to do it. I look at it this way. Scholarship is vital. Journalism is vital. I only wish there were more places for people to bring them together.

There’s nothing wrong with being a fabulist, if a fable is what you’ve set out to write. Popular biography has a riveting history -- think of how well Scott Casper has traced that history. It’s an important and influential literary genre. It doesn’t happen to have a great deal in common with the work of most academic historians and, like any kind of writing, it is often done badly. But it’s often done extremely well.

There are very many non-academic historians I admire, writers like Jenny Uglow and Tony Horwitz, and lots of filmmakers, actually.

Both your academic and journalistic prose is widely praised.  Who are some of your influences as a writer and historian -- or favorite writers and historians?

Favorite writers? If I start reading someone, I read until I read everything. There’s not a writer I’ve written about in The Story of America that I didn’t get lost in, when I was reading the stuff. Franklin, Poe, Dickens, Bradford, Ellison, Jefferson, Paine, Longfellow, even John Smith. OK, not George Washington, but John Adams, at least. None of these people are my favorite writers; they’re just writers whose writing I’ve tried to get to the bottom of. Who my favorite writers are is too private to tell.

Did you want to be a historian when you were a little girl?