We're All [Ancient] Greeks Now When It Comes to Debt

by Thad A. Titze

Thad A. Titze is a research fellow at the Thomas Willing Institute for the Study of Financial Markets, Institutions and Regulations at Augustana College in South Dakota. 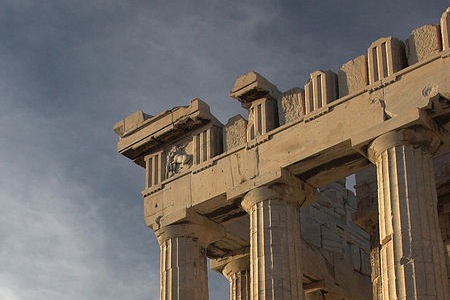 The Parthenon from the south. Credit: Wiki Commons.

Following the Peloponnesian War, Athens’ interim government borrowed 100 talents ($37 million) from the victorious Spartans. Shortly thereafter, when Athens’ democratic government returned to power, it assumed the debt incurred by the interim government and repaid the Spartans in full. This story is noteworthy as it marks one of the first discernable instances of sovereign debt. The Athenians’ timely repayment, however, is anomalous in the long history of public borrowing. Default and renegotiation of public debt is a practice nearly as old and constant as public debt itself. As the spotlight of sovereign debt returns to the Greek people -- pioneers of public debt -- it is important to recognize that throughout history governments have rarely been careful stewards of borrowed money.

Public borrowing originated following greater ease and frequency of private borrowing. The use of coins in quotidian transactions around the 7th century BCE simplified commerce and encouraged an unprecedented scale of lending. Private indebtedness led so often to default and enslavement, however, that Solon had to abolish debt slavery when he ascended to power in Athens some six centuries before the birth of Christ.

While private borrowing and its abuses grew, the Athenian city-state significantly increased spending on state employees, public works, and assistance for the poor. As spending increased, so too did Athens’ public borrowing. The first Delian League (478-404 BCE) was one readily available source of credit for Athens. The amount borrowed accounted for nearly 40 percent of public spending. Athens defaulted during the economically devastating Peloponnesian War (431-404 BCE), which strained both tax and silver mining revenues while simultaneously necessitating increased expenditures. Tax evasion on estate taxes and an overall weak economy further compounded the city’s financial woes. The sacred Treasury of Athena was a convenient creditor to the city-state during the war. At first, loans from the Goddess’ treasury were modest. By 423 BCE, however, the Athenians owed the Treasury of Athena approximately 7,000 talents, or $2.6 billion dollars. Squeezed by mounting debts and weak revenues, the government defaulted on its debt to the sacred treasury. Borrowing by various Greek city-states throughout the classical period also often ended in default, and then renegotiation or repudiation.

While the Athenians wallowed in debt, the burgeoning Roman Republic pioneered a different model of public finance. Unlike the loosely aligned Greek city-states, the EU of the classical world, the Romans lived on the spoils of war and a tax system with low levels of direct taxation. The Romans avoided public debt and instead accrued surpluses during relatively peaceful times to finance impending wars. But the surplus system died with the Empire; public borrowing reemerged in the medieval era, and so too did default.

Greece learned nothing from its ancient association with public debt as its access to foreign credit was cut off for half of the nineteenth century due to a series of defaults. Distress over austerity cuts, high levels of public debt, possible default, and tax evasion is again disrupting the Greek economy and government. Greece, however, has no monopoly on sovereign default, even among developed economies.

The United States’ own financial history includes many cases of outright default and debt renegotiation. During the American Revolution, the new state governments repudiated the bills of credit issued by the former colonial governments and the new national government allowed its currency to become virtually worthless. That same government defaulted on and renegotiated many of its domestic and foreign obligations. In the wake of the 1837 financial crisis, many states borrowed large sums to fund massive public works programs. In 1841, eight of them (and one territory) defaulted on their debts and several outright repudiated them. Another twelve states and territories came close to defaulting. Just a quarter-century later, the Confederate States of America allowed their money to become worthless and defaulted on foreign and domestic obligations. Individual states also defaulted and after the war the U.S. government repudiated all Confederate war debts. Today, the creditworthiness of several states is in doubt and the federal government’s debt rating was downgraded last year. Clearly, even America is not immune to the frequent partnership of debt and default.

At four periods during the last two centuries, over 40 percent of countries were in default or debt rescheduling. Creation of the International Monetary Fund (IMF) in 1944 was supposed to buoy foreign lending and development. Since the IMF’s emergence, however, the frequency of sovereign default has increased. Public debt continues to swell in many countries prompting prudent businesses to prepare for another possible wave of sovereign defaults and inflation while policymakers ponder what, if anything, should be done. A return to the Roman model of running surpluses does not seem to be in the offing. Chief World Bank economist and Nobel laureate Joseph Stiglitz suggests that debt default helps developing economies to flourish while proponents of “modern monetary theory” argue for an expanded use of debt to provide social services and curb unemployment.

Throughout history, governments have usually not been careful stewards of others’ money. Fiscal recklessness is as old and ubiquitous as civilization itself so even if the EU manages to solve its current problems, look for more problems in the future, in Europe and North America as well as the rest of the globe because when it comes to public indebtedness, we’re all Greeks now.