Whatever Happened to George W. Bush?

Burton Kaufman is former Dean of the School of Interdisciplinary Studies of at Miami University in Oxford Ohio, chair of the history department and director of the Center for Interdisciplinary Studies at Virginia Tech, and most recently an adjunct professor of history at the University of Utah prior to his retirement. Author of twelve books, his latest work is "The Post-Presidency from Washington to Clinton" (University Press of Kansas, 2012). 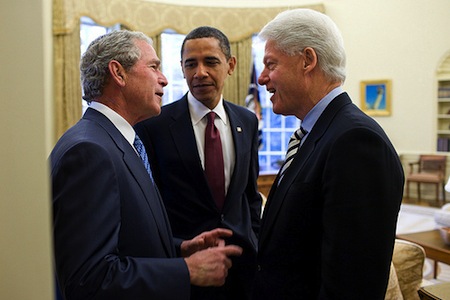 In an interview with Peter Robinson of the Hoover Institute on July 18, 2012, former President George W. Bush (Bush '43) described his eight years in the Oval Office as "awesome." Commenting that he enjoyed the fame and power that went with being the nation's forty-third president, he added, "I have no desire for fame and power anymore." He also said he thought it his responsibility as a former president not to do or say anything that might cause problems for his successors. "I don't want to undermine our president, whoever is president," he commented, "and a former president can do that, and I think it's bad for the presidency itself."

Bush's attitude toward his post-presidency and his role as ex-president is remarkably similar to that of his father, former President George H.W. Bush (Bush '41). Like Jimmy Carter (and, later, Bill Clinton), Bush senior planned to engage in public service and give back to his country. Unlike these other presidents, however, he did not consider it his duty to devote the remainder of his life to a series of world causes, however well-intended they might be. There were personal reasons for his attitude. He had devoted most of his life to public service and was very much a family man who wanted to divide his time between his homes in Houston and Kennebunkport, Maine. At Kennebunkport, he intended to teach his grandchildren how to fish and use safely the high-speed boats he so loved.

Beyond personal reasons, Bush ‘41 also had philosophical and practical motives for not wanting to be an activist former president. While sympathetic to the world's economic and social needs, he came to believe that the solution to these problems was not through massive government programs but through the mobilization of volunteers on a community level -- or, as he put it most memorably in his 1989 inaugural address, "through the mobilization of a thousand points of light."

Volunteerism and public service remained at the core of Bush's politically conservative ideology during his presidency and his retirement. He believed the nation's biggest problem was the disintegration of the family. The solution to this problem, in his view, were neighbors helping neighbors, community members helping other community members, the privileged and the famous assisting the deprived and the forgotten. After he took office, his friends and family helped establish an independent, non-profit Points of Light Foundation whose purpose was "to encourage and empower the spirit of service." Eventually it became the basis of the Points of Light Institute, the largest volunteer management and civic engagement organization in the nation.

In the four years that has followed his presidency, George W. Bush has largely followed in his father's footsteps. There have, to be sure, been some major differences between father and son. Unlike most former presidents, for example, Bush '41 had no interest in making large sums of money by writing his memoir (although his wife Barbara received a large advance to write her memoir, which became a best-seller). In contrast to his father, Bush '43 signed a lucrative contract (reportedly $7 million) to write his memoir, Decision Points (2010).

Decision Points is a sprightly written, gracious but feisty, self-justification of his administration with a single chapter devoted to Bush's years before running for elective office. In it, he emphasizes his struggle with alcoholism and his born-again Christianity. The remainder of the volume stresses the major decisions of Bush's administration, most notably with respect to 9/11, the subsequent wars in Afghanistan and Iraq, the former president's response to Hurricane Katrina, and the financial crisis of 2008. If there is a single theme to Decisions Points, it is that, contrary to popular belief, the forty-third president was always deeply informed and engaged and made the major decisions of his administration. Another major point is that, notwithstanding a second popular view that stresses the strained relations between the Yankee-bred patrician from Connecticut and his rebellious son with his deeply-rooted West Texas values, the relationship between father and son during the son's presidency has always been one of mutual love and pride and almost daily consultation.

Although rightly panned by most reviewers as a superficial and unpersuasive justification of the actions taken by Bush both with respect to going to war in Iraq and the administration's bumbling response to the devastation wrought by Katrina, Decisions Points was an enormous financial success. An instant best-seller, it sold more than two million copies in its first two months after publication, a figure that took Bill Clinton's My Life six months to reach. It continued to remain at the top of the charts for the next sixteen weeks. The conservative Weekly Standard delighted in noting the book's success despite its claim that the liberal media largely ignored the volume's success.

Besides the enormous royalties that Bush '43 received from Decision Points, he also made large sums by going on the lecture circuit, giving motivational speeches, speaking to business groups, and even appearing with Bill Clinton, who had become close friends with the Bush family. One estimate places Bush's earnings from his speaking engagements -- for each of which he received between $100,000 and $150,000---at more than $15 million. This was not quite in the same league as Bill Clinton, who reportedly receives as much as $250,000 a speech and made at least $50 million from his speeches. But it was a tidy sum, nevertheless.

What is striking, however, is how closely Bush's post-presidency has followed that of his father. Dividing most of his time between his home in Dallas and his ranch in Crawford Texas, he has kept his vow to remain apart from the political arena and not to question the policies or programs of his successor, Barack Obama, despite withering criticism from the president over his foreign and domestic policies as president. In part, this may have been due to his party's desire to distance itself as far as possible from his unpopular administration. More likely, it has been the result of his deeply-held conviction that former presidents should abstain from the public limelight and to his inner self-confidence (a trait he also shares with his father) that history will judge his administration favorably.

Like his father, however, Bush has been quietly engaged since leaving office in a wide spectrum of charitable and humanitarian efforts, most of them through the George W. Bush Institute. A part ot the high tech Bush Presidential Center at Southern Methodist University in Dallas, which will also include the George W. Bush Library and Museum scheduled to be dedicated later this year, the Institute has been up and running nearly since Bush left office in 2009. Reflecting his conservative political philosophy and modeled in part on the conservative Hoover Institute at Stanford University, the Institute's mission statement is based on four stated principle: 1) "freedom is universal" 2) "each human life is precious" 3) "to whom much is given, much is required," and 4) "the marketplace is the best way to allocate resources." Although not specifically stated in the mission statement, the Institute has also made it a priority to recognize the sacrifices and services of military servicemen and their families. Accordingly. the efforts of the Institute have included promoting the free enterprise system throughout the world, such as by publishing The 4 % Solution, intended to spur world economic growth by promoting four percent growth in the United States: collecting documents and interviews that "give voice to human freedom and democracy throughout the world"; and an annual "Warrior Open Champion " golf tournament for military amputees.

The Institute's activities also include two of the more notable efforts of the Bush administration, improving American schools and initiating global health programs. Most notable has been its efforts in the field of health services. It has, for example, provided cervical and breast cancer services to African women through its Pink Ribbon/Red Ribbon program. Continuing his effort during his administration to fight the AIDS epidemic throughout Sub-Sahara Africa, Bush has worked closely with pharmaceutical companies and health professional to make available to African countries billions of dollars for retroviral drugs and treatment. Working closely with the Global Alliance for Vaccines and Immunization (GAVI), established in 2007, for example, Bush has helped lower the cost of a HPV vaccine from $390 to twenty cents per vaccine in the world's most destitute countries . He has also traveled a number of times to Africa with his wife Laura on behalf of the Pink Ribbon/Red Ribbon Program and visited orphanages where many of the children were born with HIV.

It is doubtful, at least in the near future, that the presidency of Bush '43 will receive the same favorable reassessment that his father's presidency is beginning to receive. Certainly the two former presidents remain quite different in terms of the background, temperament, and personality they brought to their presidencies or the way they conducted themselves in the Oval Office.

That said, it is already apparent that Bush '43 is carving out a post-presidency similar to his father's. Although there is even more of an ideological bent to Bush "43's post-presidential activities than those of his father, this difference is obscured by their vast similarities. Like his father Bush '43 has rejected the very public, post-presidential activism and massive undertakings of Jimmy Carter and Bill Clinton. Instead, of their laser-like efforts, the Bushes have emphasized more limited programs and less personal involvement in which they have sought to be only one of a thousand points of light. Like his father also, George W. Bush seems to be finding his role in unpublicized, quiet service, genuinely unconcerned about his place in history.