Ian Reifowitz is the author of "Obama's America: A Transformative Vision of Our National Identity" (Potomac Books, 2013). 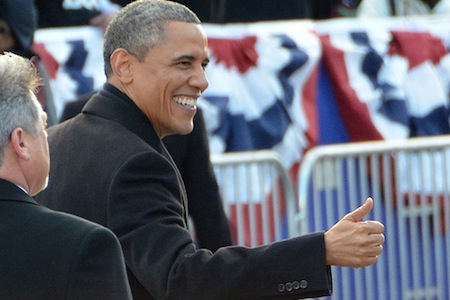 Barack Obama has always had a keen sense of history, both how to make it and to talk about it. He consistently offers an inclusive, unifying narrative of our country’s past that helps explain his conception of our national identity. We can see this clearly in his second inaugural address.

Right off the bat the president drew on his favorite lines from our common story, those from the Declaration of Independence that proclaim our liberty and the equality of all people. He described us as being on a “never-ending journey” to ensure that our society lives up to those ideals. Unlike Tea Partiers who dress in revolutionary garb as a political statement, Obama rejects the notion that an earlier period embodies the ‘true’ America. He argues instead that today we are closer to that true America than ever.

A string of events highlighted signposts along the common path we’ve travelled: a revolution to win independence, a war to end slavery, building our infrastructure and education system, enacting rules that restrained the excesses of a free market, and crafting a safety net to help those the market leaves behind. Here the president took us from 1776 right up to the present, characterizing all those accomplishments -- including the progressive social programs enacted by FDR, LBJ and, well, BHO -- as crucial steps along our journey. He also noted that we achieved all these things “together,” even as we’ve held to such “constants” as a belief in limited government, the importance of personal responsibility, and the virtues of hard work and entrepreneurial initiative.

After acknowledging our individualist strain and, if indirectly, the influence of Reagan-era conservatism on our collective consciousness, Obama again drew on history -- referring to previous struggles against fascism and communism -- to emphasize that, despite this strain, collective action will continue to be necessary to tackle our biggest problems. He then returned to the aforementioned “founding creed,” asserting that honoring it means we must ensure that “a little girl born into the bleakest poverty knows that she has the same chance to succeed as anybody else because she is an American, she is free, and she is equal not just in the eyes of God but also in our own.”

That creed, Obama noted, stood at the center of great liberationist movements throughout our history. He listed place-names from two that he (and others, to be sure) have mentioned before: the long movements for women’s rights (Seneca Falls) and civil rights (Selma). The president also listed a third (Stonewall) that signifies one never before been heard in an inaugural address, namely that of gay rights. Stonewall -- which sparked the contemporary gay rights movement -- refers to a 1969 clash at a Greenwich Village bar between homosexuals and police officers seeking to arrest or otherwise harass them essentially for being gay, standard practice at that time. Placing Stonewall in the liberationist pantheon alongside Seneca Falls and Selma represents Obama saying that the gay rights movement’s fight for equality is central to America completing its journey toward perfection.

In fact, Obama has previously included Seneca Falls and Selma in his American history narrative. In Des Moines, Iowa, on May 20, 2008, he spoke of "the spirit that sent the first patriots to Lexington and Concord and led the defenders of freedom to light the way north on an Underground Railroad. It's what sent my grandfather's generation to beachheads in Normandy, and women to Seneca Falls, and workers to picket lines and factory fences. It's what led all those young men and women who saw beatings and billy clubs on their television screens to leave their homes, and get on buses, and march through the streets of Selma and Montgomery -- black and white, rich and poor." That day, as in the inaugural address, the president gave pride of place in our country's story to victories won on the military battlefield and in the battle for equality. Placing Stonewall in that pantheon makes his historical narrative even more fully inclusive.

In his second inaugural President Obama used history to connect the struggle to ensure equal rights and equal opportunity for all to the core values expressed at our nation’s founding. He called the egalitarian creed long ago written in the Declaration of Independence the “star that guides us still.” Although we may never all agree on certain questions, Barack Obama’s American history narrative can, hopefully, enhance a sense of unity binding together the varied elements of our population and help us truly be, as he has often called us, “one American family.”