David O. Stewart is the author of "Impeached: The Trial of President Andrew Johnson and the Fight for Lincoln’s Legacy." His novel about the John Wilkes Booth conspiracy, "The Lincoln Deception," will be issued in September 2013. 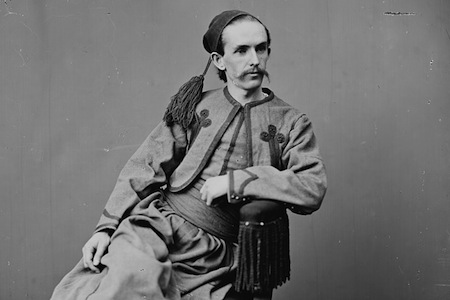 John Surrat in the uniform of a Papal Zouave.

As the world’s eyes turn to Rome for the selection of the next pope, Americans might recall that Vatican City was the refuge in 1866 for the Lincoln conspirator who got away -- John Surratt of Maryland.

In 1864, the 20-year-old Surratt was a courier for the Confederacy, carrying messages between Richmond, Washington, D.C., New York, and Confederate agents in Canada. Raised in Confederate-leaning southern Maryland, Surratt frequently crossed the Potomac on secret missions.

Late in the year, he moved with his sister and widowed mother to Washington, D.C. Mary Surratt opened a boarding house on H Street. It soon became the center of an anti-Lincoln conspiracy. In President Andrew Johnson’s phrase, Mrs. Surratt “kept the nest that hatched the egg.”

By mid-March, with the Confederacy’s military prospects vanishing, Booth and Surratt led a mismatched gang of a half-dozen on a mission to kidnap President Lincoln as he rode to the Soldiers’ Home north of the White House. They proposed to trade Lincoln for thousands of Confederate prisoners of war, or even for a peace deal. The farfetched scheme came to naught when Lincoln decided against the trip to the Soldier’s Home.

Booth then turned to assassination, targeting Lincoln along with then-Vice President Johnson, Secretary of State William Seward, and possibly General Ulysses Grant.  When the conspirators launched their plan on April 14, the tragedy at Ford’s Theater entered the national psyche, a permanent wound that cannot heal.

John Surratt’s location during the assassination remains in dispute. At Surratt’s trial in 1867, his lawyers and some eyewitnesses insisted he was in Elmira, New York, studying a prisoner of war camp for a prisoners’ revolt.  Prosecutors, brandishing railroad schedules and producing other eyewitnesses, insisted he took the train to Washington and joined in Booth’s mayhem.

No dispute surrounded Suratt’s elaborate flight after the crime. First he hid with a Catholic priest in Canada, then he sailed to Britain under an assumed name. Again assisted by Catholic clergy, Surratt moved on to Rome. In December 1865, he enlisted in the Papal Zouaves as “John Watson.”

The military unit -- a sort of French Foreign Legion for Catholics -- served Pope Pius XI in resisting Garibaldi’s drive to unify Italy. The colorful Zouave uniforms, inspired by North African soldiers, featured loose trousers and embroidered jackets, a long sash and fez. The Zouave gear appealed to the romantic sensibilities of the 1860s; early in the Civil War, some Union regiments adopted it.

After barely four months in the papal service, Surratt was recognized by a fellow Zouave, Henri Beaumont de Sainte Marie. The two men had met in Maryland during the war. Sainte Marie alerted American officials in Rome.

Tipped off that he soon would be arrested, Surratt escaped through the sewers of his barracks and raced onto a ship bound for Egypt. This time, American agents were a step ahead of him. They arrested Surratt, still in his Zouave uniform, when he walked off the ship in Alexandria.

In the months after the Civil War ended, public contempt for Surratt had been high. He was the faithless son who abandoned his mother to answer for his crimes. After a long trial before a military commission, Mary Surratt had been hanged with three other conspirators on July 7, 1865. She was the first woman executed by the U.S. government.

Surratt’s flight, however, paid off for him in his 1867 trial for Lincoln’s murder.  With the war over for two years, he did not face a military commission as his mother had, but a civilian jury in Washington, D.C., then a city with a distinctly Southern sensibility. The jury deadlocked, eight for acquittal and four for conviction. John Surratt walked free.
After teaching school and failing in a series of public lectures protesting his innocence, Surratt spent nearly fifty years working for a Baltimore-based shipping line, retiring as its treasurer. He died in 1916 at the age of 72, survived by two of his children.

The Surratts’ Catholicism led to a weird mingling of religion and conspiracy theory. For decades after the assassination, Mary Surratt’s former priest insisted she was an innocent victim of the government’s anti-Catholic prejudice. In contrast, a lapsed priest pointed to John Surratt’s escape and service in the Papal Zouaves as proof that Jesuits masterminded the president’s murder at the pope’s request. Though individual clerics aided Surratt, no evidence ever tied the conspiracy to the Church hierarchy.