Congress Needs to Lead on the Budget, Not the President

Raymond Smock is Director of the Robert C. Byrd Center for Legislative Studies at Shepherd University and was Historian of the U.S. House of Representatives from 1983 to 1995. 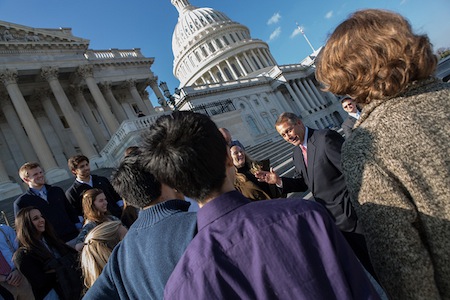 In the political posturing and finger-pointing taking place regarding the “sequester,” the first victim is the United States Constitution. Congress has ignored its responsibility as a co-equal branch of the government. It is the House and Senate that have the power of the purse, not the president. It is the job of Congress to pass appropriations bills, which the president can either sign or veto. The president does not have the power to pick and choose those budget items he likes or dislikes. The money has to be spent, by law, the way Congress says it should be spent.

On the day the sequester kicked in, House and Senate leaders met with the president but nothing was agreed to that would override the arbitrary, ill-conceived automatic budget cuts that will be felt in the weeks and months ahead. It does seem, however, that another stopgap measure may be forthcoming in a matter of weeks. It was instructive what President Obama said after this last meeting before the sequestration began: “I am not a dictator. I am the president.” He said he could not force Congress “to do the right thing.” His statement is consistent with the Constitution, which limits the powers of the president when it comes to matters of the budget. He cannot dictate to Congress. He cannot demand passage of a budget.

If Congress fails to pass regular appropriations bills as part of the normal, regular order of business, then it becomes the president’s job to figure out how to make the executive branch of government, including the military, function as best it can with what money is available. To keep the government from shutting down, Congress has been passing a series of short-term continuing resolutions which allow the government to continue to run on appropriations levels that were previously passed. The CR’s are a stopgap measure. They keep things running on a temporary basis while the nation lurches from crisis to crisis. With last-minute CRs everyone loses, and government becomes more costly because the inability of policy makers and agencies of government to plan ahead. You cannot plan without knowing what the appropriations will be.

Speaker Boehner came out of the March 1 meeting and said that there would be no tax increases in any fix of the budget mess. This is consistent with the Constitution, which gives the power to tax to Congress, although he was speaking for only part of Congress. Boehner’s statement was partisan, reflecting the position of Republicans in Congress to cut government spending as the only way to achieve long-term deficient reduction. The president’s position has been to reduce the deficient through spending cuts and increases in revenue from taxation on higher incomes, especially by closing loopholes for corporations and wealthy individuals.

In late February Speaker Boehner blamed the president for failure to lead on the budget crisis. He said the president was elected to lead. But so was Congress. In this instance the Speaker’s comment fails to reflect constitutional reality. The president’s role in the budget process is to recommend expenditures for the federal government and submit those recommendations to Congress early in each fiscal year. Then it is up to Congress to decide if the amounts in the president’s recommended budget warrant the funds.

The White House has the Office of Management and Budget to recommend expenditures and to compile a federal budget. Congress has the Congressional Budget Office as its way of checking the budget proposed by the president. And each house of Congress has its own budget committee. Usually the president’s budget is declared “dead on arrival” when it reaches Capitol Hill. This has become a standard litany in the dance of legislation, no matter which party holds the White House or the Congress.

Speaker Boehner said the best way to solve the budget crisis was through the regular appropriation process and not with meetings between congressional leaders and the president. This is a clear and succinct statement of how things should work. It would be a huge step in the right direction if Congress could pass the thirteen regular appropriations bills by September or October each year and send them to the president for his signature. But this has not happened for a long time. The budget process has become a form of brinksmanship, going from one crisis to another. This is not what the framers of the Constitution expected, nor is it what we should expect of government today.

The budgetary crisis we are experiencing is not about some theory of minority rights protecting the nation from the tyranny of the majority. This is not about the Federalist essays or John C. Calhoun, even though such views are always instructive. Right now in our time, not the time of the Founders or in the time of John C. Calhoun, it is the current elected leaders who must act.

The government is virtually equally divided. Neither party has sufficient numbers to function alone. The Republicans are in the minority in the Senate by five votes. The Democrats are in the minority in the House by 32 votes. The Supreme Court, supposedly not a partisan branch, is ultra-conservative by one or two votes. President Obama, a Democrat, won re-election by a decisive margin, yet the Republican Party in a closely divided Congress refuses to recognize the results of the national election.

One of the favorite expressions of my former boss, Speaker Tip O’Neill was: “If you want efficient government, get yourself a dictatorship.” It was his way of reminding people that the process of making legislation and the process of determining the annual budget of the United States was not designed to be efficient. The Constitution divides power. And it even divides the power of the purse between two houses of Congress. There are legitimate practical differences of opinion and ideology over how government should work and what priorities need to be set. This is always the case. The political battle is a continuous one. It is never smooth. It is never easy. And it is never over.

But the end result, the final product, no matter how imperfect, should be accomplished through the regular order of business with the thirteen major appropriations committees doing their jobs. If Speaker Boehner can deliver on this part of what he said, we could get back on track. When the regular order of business of the House and Senate is subverted for too long, for any reason, then Congress is not doing its duty as a co-equal branch of government and Congress undermines its own Constitutional authority when it fails to pass regular appropriations bills.

I don’t want the president to have the power of the purse. That would lead to dictatorship. We would not need Congress except as a debating society if the power of the purse was lost to the executive branch. This is all the more reason for Congress to do its constitutional duty to be co-equal partners in governing this nation. Congress needs to act not because our deficit is so out of whack (though it assuredly is), but because the Constitution is even more out of whack when it is in the hands of so many people who refuse to govern. We cannot get back to the regular order of business until the word compromise returns in a positive context to the lexicon of legislators.