When It Comes to Transparency, Obama's Channelling His Inner Nixon

Mary L. Dudziak is Asa Griggs Candler Professor of Law at Emory University. Her most recent book is "War Time: An Idea, Its History, Its Consequences." 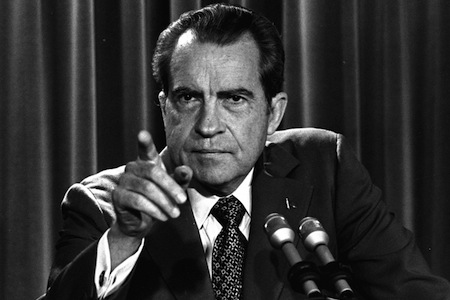 The Boston Globe reported that the president withheld a widely sought white paper “fearing it would only intensify congressional criticism, government sources say.”*

This story appeared on April 4, 1973, and it referred to a white paper laying out the legal basis for President Richard Nixon’s decision to bomb Cambodia after U.S. troops were removed from Vietnam. Barack Obama obviously isn’t Richard Nixon, but his reluctance to disclose the legal basis for targeted killings attempts to do something that Nixon also attempted: to cloak decisions about war in government secrecy, undermining political checks on the use of military force.

Nixon’s white paper was written by the State Department’s deputy legal advisor after questions were raised about the legal authority for bombing Cambodia. It was described as contending that military action in Cambodia was “simply part of the ending of the general Indochina war. “Therefore, it argues, Mr. Nixon has the constitutional right as commander-in-chief of the armed forces to continue the bombing.” Although there was disagreement about the rationale in the State Department, Secretary of State William P. Rogers was said to have approved the white paper, and sent it to the White House, where it remained, apparently in the hope that the controversy over Cambodia would go away.

But as the controversy continued, “delay in disclosure now is based on White House realization of the inherent weaknesses in trying to build a constitutional case for the bombing.” The administration had tested the waters, informally discussing the draft with a few members of the Senate, but “they tore the arguments apart and told the Administration people the draft would not help in offsetting any moves to prohibit legislatively continued US military acts in Cambodia.”

Whatever happened to Nixon’s Cambodia white paper is unclear from the sources I’ve seen so far, but it was not publically released in 1973.

Presidents use secrecy for many reasons, some legitimate, and some illegitimate. In this case, Nixon’s State Department crafted a legal rationale, but then found that its release would only fuel congressional criticism, heightening interest in limiting Nixon’s power to use military force. Deep-sixing the legal argument was part of an effort to insulate decisions about the use of force from political reaction and political restraint.

Nixon, of course, had many other problems by 1973. He would resign from office the next year amidst the Watergate scandal and impeachment. An impeachment charge proposed but not passed related to Nixon and Cambodia, particularly his effort to keep the 1969-70 bombing of Cambodia from Congress and the American people.

There is a long, if sometimes less sordid, history of secrecy for this sort of reason: to keep Congress and the American people from undermining the president’s autonomy. If President Obama is not, in this sense, Nixonian, the best way to show it would be to make public the OLC memos detailing the legal rationale for targeted killing.

*The article quoted is: Associated Press, “U.S. reportedly withholds bombing-rationale report,” Boston Globe, April 4, 1973, p. 12. Thanks to Mary Beth Chappell of the Emory University Law Library for assisting with my research on Nixon and Cambodia.