Robin Lindley (robinlindley@gmail.com) is a Seattle writer and features editor for the History News Network. His interviews with scholars, writers and artists have appeared in HNN, Crosscut, Writer’s Chronicle, Real Change, The Inlander, and other publications. 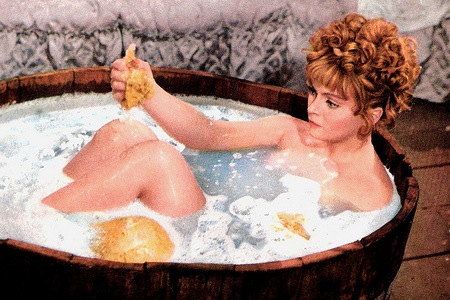 In England, the eighteenth century was a time of questioning, exploration, scientific advances, and an expanded worldview -- the birth of modernity, according to some historians.

In Mighty Lewd Books: The Development of Pornography in Eighteenth-Century England (Palgrave MacMillan), Dr. Julie Peakman, a specialist in women’s history and the history of sexuality, examines hundreds of examples of erotica from the period and discusses how these works convey insights about the culture, behavior, politics, science and society of the time.

Many historians of eighteenth-century England consider Dr. Peakman’s Mighty Lewd Books a classic that advances a radical approach to the study of sexuality from a feminist perspective. The book, originally published in 2003, was recently reissued. In the forward to the new edition, Dr. Peakman notes the surge of scholarly interest in the history of sexuality and erotica in the past decade, and adds, “What interests us is what pornography tells us about our culture, past and present.”

And historian Tim Hitchcock wrote: “Mighty Lewd Books gives us a readable, engaging and comprehensive account of the history of eighteenth-century pornography and erotica. By exploring the history of this artefact of sexual behaviour at the moment when modern sexualities were created, Peakman provides a new and important understanding of both the meaning of dirty books, and the origins of modernity.”

Dr. Peakman teaches history at Birkbeck College, University of London. Her other books include Lascivious Bodies: A Sexual History of the Eighteenth Century and a six-volume edition of A Cultural History of Sexuality, and she edited the collection Sexual Perversion 1670-1890. She has appeared in documentaries for the BBC, the Biography Channel, and others, and she writes for numerous publications. She lives in London and on the Greek island of Leros with her partner.

Dr. Peakman graciously responded by email to questions on her work and her book Mighty Lewd Books.

Robin Lindley: How did you decide to specialize in the history of human sexuality? Did you have particular mentors or books that influenced your decision?

How have other historians and general readers reacted to your work? Do you sense some embarrassment or uneasiness with the academic crowd?

Academics are a hardy bunch so they are unlikely to be shocked by my work; rather the opposite. I have found a great interest in my work, not just from academics but from the broader world of sex workers and others interested in the field of human sexuality. I was invited to give an opening lecture at the 20th World Congress for Sexual Health held in Glasgow a couple of years ago about the research from my current book about sexual perversion. I like it when my works reaches a broader public.

In Mighty Lewd Books you examine the erotica and pornography of eighteenth-century England. What sparked your interest in this topic and the period?

It sprang from my research in women’s history as it seemed a natural progression. You cannot study women without studying men and the history of sexuality as a whole. (Male historians had been taking such a biased stance, viewing the past from a male-oriented position, for far too long, thereby leaving out half the human race.)

The eighteenth-century was a fairly fresh field regarding sexuality at that stage, everyone seemed to be writing about the Victorians. I therefore plumped for what seemed to be the fresher, more untrodden, ground.

When I finished my PhD, I published the monograph from the research. But I had tons of other material I had gained about real-life experiences of men and women so I wanted to write it up in a different sort of book, one based on reality not fiction. I sent in a proposal to Past and Present, the history journal and was spotted by one of the judges who ran a publishing company. He asked me to write a book for them, which became Lascivious Bodies. A Sexual History of the Eighteenth Century.

You distinguish erotica and pornography. Can you explain the distinction?

"Erotica" was used as a catch-all phrase used in the Victorian period, it was more of a general categorization in which hard-core pornography sat. However the categorizing has become more nuanced these days and historians tend to see erotica as being a cache of material which is euphemistic or suggestive rather then the graphic descriptions of genitals and sex as seen in pornography.

What was the general attitude on pornography in England in the 1700s? Were people open to it or was it taboo in most circles? Did the Church of England play a role?

It depends on the person you are looking at. There was much less censorship in the eighteenth-century, although books could be banned for "obscene libel."

With the underground market, pirate books, and books produced in Paris and Amsterdam, it was easy to get hold of pornography. There were various booksellers who operated in the Strand in London where pornographic books could be bought.

Readers loved these books. Obviously some of the snootier commentators of the day thought them too salacious for the modest eye, but the books obviously gave a lot of pleasure judging from their popularity.

Do you have a sense of whether American colonists were consumers of English erotica or pornography?

What were some of the most popular themes in pornography of the period?

Those who study history will be interested in your thoughts on pornography and its reflections of scientific and cultural developments. What were some ways science and culture influenced this literature in eighteenth-century Britain?

Early English erotica tended towards the suggestive in the nod-nod, wink-wink sort of way. It also liked to mock new medical views emerging in science, particularly the more outlandish suggestions emanating from the Royal Society.

New developments in botany were simply too easy for writers not to satirize - for example, when the botanist Linnaeus explained his sexualization and fertilization of plants, writers of erotica bought out pamphlets on The Tree of Life and The Flowering Shrub explaining out they "grew" and "flowered," allusions to the penis and vagina.

Did women enjoy pornography and produce it at the time?

There is less evidence of women reading pornography although there are the occasional instances, which turn up in memoirs and autobiographies. Certainly they published and sold it, and some of the more unfortunate women among them were involved in court cases.

Wasn’t pornography then generally written to appeal to heterosexual males?

On the whole, from the evidence we have at hand (note the cautious historian’s view), yes, pornography was aimed at men. They were, after all, usually the ones who held the purse stings. But there is no reason to suppose wives and girlfriends did not get to read it. Certainly, women in brothels read it.

In anti-Catholic erotica, the sexual lives of priests and nuns were a preoccupation. There were themes of convents as brothels and priests seducing young women -- which seemed to be popular for centuries on the Continent. However, today’s concerns with homosexuality and priests’ abuse of boys didn’t seem to emerge. What did you find?

There seems to be a taboo against homosexuality in pornography, which is odd considering its intention was supposedly to transgress taboos.

Homosexuality only began to be explored properly at the end of the nineteenth century, although there were the odd references to in the eighteenth century. De Sade explored sodomy in French pornography, but the British were relatively more reserved.

It may surprise some modern readers that writing about flagellation was of considerable interest. How do you explain that interest? Does it reflect that brutal time of public execution, legal slavery, and extreme punishment such as the savage flogging of sailors?

I think it was less to do with overall public brutality and probably more to do with private whippings. There was a section of men who had been "disciplined" in their youth, either at school in the nursery at home. Rousseau, in particular, blamed his later obsession with flagellation on his nanny who used to flog him.

How does Mighty Lewd Books figure into the history of human sexuality? What resonates with the present when images or words of virtually any interest now can be accessed instantly on the web?

What I find most interesting is how pornography hijacks all forms of new technology -- first in cheap print, then in postcards, photography, film, video, DVDs and now the Internet. Mighty Lewd Books explores the beginnings of this process with pornography in print culture.

The last few years of my research had been on sexual perversion in history. Its culmination [will be] published with Reaktion Books in October under the title The Pleasure’s All Mine: A History of Perverse Sex.