Austerity: The History of a Dangerous Idea

Mark Blyth is Professor of International Political Economy at Brown University. He is the author of "Great Transformations: Economic Ideas and Institutional Change in the Twentieth Century." His most recent book is "Austerity: The History of a Dangerous Idea" (Oxford University Press, 2013), from which this essay is adapted. Copyright © Oxford University Press. 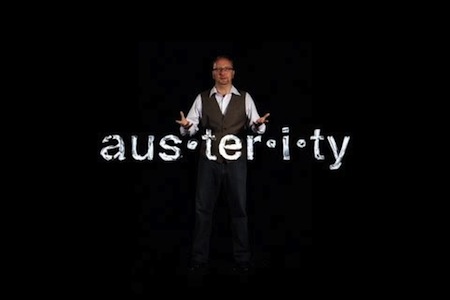 This book has a rather unusual genesis. David McBride from Oxford University Press emailed me in July 2010 and asked me if I wanted to write a book about the turn to austerity in economic policy. I had been playing with a book idea called “The End of the Liberal World” for a while but really hadn't been getting all that far with it. Dave's offer seemed to be a ready-made alternative project. After all, someone had to write such a book, and since I had, as bankers say, “skin in the game” here, for reasons I shall elaborate below, I said yes. Shortly thereafter Geoffrey Kirkman, Associate Director of the Watson Institute for International Studies at Brown University, where I am a faculty fellow, wondered if there was anything that I would like to make into a short video. I say yes – I'd do something about this new book that I have agreed to write.

Both of these opportunities arrived shortly after the G20 issued its final communique at the ened of its June 2010 meeting in Toronto. That G20 meeting marked the moment when the rediscovery of Keynesian economics that had informed state responses to the global financial crisis since 2009 gave way to an economically more orthodox, and austere, reading of events. The G20 communique called for an end to reflationary spending under the guise of something called “growth friendly fiscal consolidation,” which is a fancy way of saying “austerity.”

I remember thinking at the time “that's about as plausible as a unicorn with a bag of magic salt.” So when I was afforded the opportunity to make a video, taking on this “austerity as a route to growth” nonsense seemed the way to go. The video can be seen at http://www.youtube.com/watch?v=FmsjGys-VqA.

Part of what academics do is generate ideas and teach. The other, perhaps more important party, is to play the role of “the Bu*l*hit Police.” Our job is to look at the ideas and plans interested parties put forward to solve our collective problems and see whether or not they pass the sniff test. Austerity as a route to growth and as the correct response to the aftermath of a financial crisis does not pass the sniff test. The arguments given for why we all must be austere do not pass the sniff test. You will read the full version of why not in this book. The short version became the video. But in shooting the video, the producer Joe Posner forced me to distill what I wanted to say about this topic into five-and-a-half minutes. Once I did that, I went back to the book and wondered if I had anything more to say.

The opportunity to get into more detail and flesh out the argument, the academic rationale, was still there. Both the reasons given for why we all have to be austere (we have spent too much, etc.) and the logics expounded for the supposed positive effects of austerity as a policy – that cuts lead to growth – are, as we shall see, by and large dangerous nonsense. Yet they remain the governing ideas of the moment. By the time the book is published this may no longer be the case, but in the meantime, these ideas will have wrought tremendous damage.

Part of the reason for this is, as we shall see, ideological. But part of the reason these ideas are so powerful is very material It has to do with how a “too big to fail” banking crisis in the United States became a “too big to bail” banking crisis in Europe, and how this drives us all down the road to austerity. We are, at best, still saving the banks that we started saving in 2008, especially in Europe. This book allowed me to work out why such bad ideas remain the governing ideas, for both ideological and material reasons. But going back to the book after doing the video made me remember another much more personal reason why I should write this book that has to do with the unfairness of austerity as a policy.

I was born in Dundee, Scotland, in 1967, the son of a butcher and a television rental agent (yes, back in the day, TVs were so expensive that most people rented them). My mother died when I was very young, and my care was given over to my paternal grandmother. I grew up in (relative) poverity, and there were times when I really did go to school with holes in my shoes. My upbringing was, in the original sense of the word, quite austere. Household income was a government check, namely, a state retirement pension, plus occasional handouts from my manual-worker father. I am a welfare kid. I am also proud of that fact.

Today I am a professor at an Ivy League university in the USA. Probabilistically speaking, I am as an extreme example of intragenerational social mobility as you can find anywhere. What made it possible for me to become the man I am today is the very thing now blamed for creating the crisis itself: the state, more specifically, the so-called runaway, bloated, paternalist, out-of-control welfare state. This claim doesn't pass the sniff test. Because of the British welfare state, threadbare though it is in comparison to its more affluent European cousins, I was never hungry. My grandmother's pension plus free school meals took care of that. I never lacked shelter because of social housing. The schools I attended were free ad actually acted as ladders of mobility for those randomly given the skills in the genetic lottery of life to climb them.

So what bothers me on a deeply personal level is that if austerity is seen as the only way forward, then not only is it unfair to the current generation of “workers bailing bankers,” but the next “me” may not happen. The social mobility that societies such as the United Kingdom and the United States took for granted from the 1950s to the 1980s that made me, and others like me, possible, has effectively ground to a halt. Youth unemployment across the developed world has reached, in many cases, record levels. Austerity policies have only worsened these problems. Cutting the welfare state in the name of producing more growth and opportunity is an offensive canard. The purpose of this book is to make us all remember that and thereby help to ensure that the future does not belong only to the already privileged few. Frankly, the world can use a few more welfare kids that become professors. It keeps the rest honest.