Why the Boston College Oral History Ruling Isn't a Victory

Chris Bray holds a PhD from UCLA, and is also a former United States Army soldier and journalist. His particular study of the Boston College case stems from his interest in the protection of research and the right of free inquiry. He has been blogging about the case at http://bostoncollegesubpoena.wordpress.com. 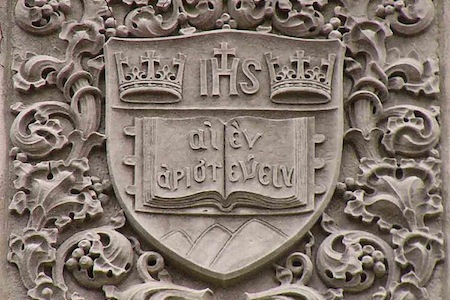 Boston College motto: "Ever to Excel," engraved on the Bapst Library on campus. Credit: Wiki Commons.

The journalists are mostly wrong. A federal appeals court decision in Boston this week is a victory, of sorts, but not for oral history. Neither is it much of a victory for Boston College, which filed the appeal. In the end, the university merely protected confidential archival material that its own curious negligence put at risk. (Read the First Circuit's complete opinion here.)

First, the real victory. The case involved a set of federal subpoenas for oral history materials archived at Boston College's Burns Library. The interviews in question were conducted with former members of the Irish Republican Army after the Belfast Agreement produced peace in Northern Ireland, and the subpoenas were the product of a request from the British government. The Police Service of Northern Ireland claims to be conducting a murder investigation, looking for the IRA members who killed Belfast resident Jean McConville in 1972. The date of this long-ignored murder should be a first clue about the credibility of the effort. (See this 2011 blog post for a detailed description of the questionable politics behind the subpoenas.)

In a series of audacious legal briefs, the Department of Justice informed the federal courts that they had no authority to interfere with subpoena requests from foreign governments. Mutual legal assistance treaties are creatures of the executive branch, federal lawyers argued, and so must be approved by judges without question or examination. (See, for example, pg. 8 of this July, 2011 brief.) The courts reacted with predictable hostility to this attempt to make the judiciary a subordinate branch of government.

"In substance," this week's First Circuit opinion reads, "we rule that the enforcement of subpoenas is an inherent judicial function which, by virtue of the doctrine of separation of powers, cannot be constitutionally divested from the courts of the United States."

This is the victory: a sharp rejection of the fetish for unbounded executive authority that marks an unfortunate area of continuity between the Bush and Obama administrations. In the future, foreign fishing expeditions into academic archives will be examined by the courts, which have refused to simply serve as a rubber stamp for federal prosecutors.

Unfortunately, though, that examination will be of limited value. While the First Circuit did narrow the range of archival material to be delivered to police in Northern Ireland, they did so only on the grounds that much of the material ordered to be sent overseas by the district court was simply not germane to the subpoenas. The appeals court did not reject the principle that foreign governments may compel the disclosure of confidential academic research material from American universities; rather, the court simply declared that the archival material delivered to those foreign governments must be the material that is actually sought.

And this is where the curious nature of BC's victory becomes clear. A set of subpoenas delivered to the university and its archivists in August, 2011 demanded interview material directly related to the murder of Jean McConville. That's all that was subpoenaed -- the U.S. Attorney's Office in Boston was not seeking a broader range of information on the IRA.

So take a look at this December, 2011 letter from Boston College's lawyer in the case, Jeffrey Swope, to the docketing clerk for the district court in Massachusetts. On pg. 2, Swope acknowledges that the district court judge "reminded Boston College of its responsibility to identify specific interviews that it has determined to be germane." But on pg. 1 of the same letter, Swope reports that Boston College is delivering to the court every one of the IRA interviews in its possession, so that the court may perform in camera review of the materials and determine which of the interviews are germane to the subpoenas.

Simply put, Boston College gave up interviews it did not have to give up. Many more publicly available court documents make this case, which I argued in detail -- with documentation -- in this 2011 blog post.

The district court judge ordered Boston College to deliver to the U.S. Attorney's Office in Boston a set of interview materials that were not germane to the subpoena, and BC then won an appellate decision releasing them from that overly broad obligation. But the district court judge never asked for the materials that weren't germane to the subpoenas in the first place. Boston College dumped its entire set of archived IRA interviews on the court because of its own refusal to identify only those materials that were actually subpoenaed. Having imposed on the judge the task of making an unnecessary in camera review of material that was not subpoenaed, the university then went to the First Circuit with the argument that the judge mishandled the task they had dumped in his lap.

Winning a legal appeal, Boston College succeeded in preventing the disclosure of material that they turned over to the federal courts after it wasn't subpoenaed. They took back ground they gave up. That's quite a victory.

The bottom line is that the federal courts have clearly maintained the right of foreign governments to take confidential research material from American universities. It's hard to see where the good news is in that decision.

Correction: An earlier version of this article stated that Mr. Bray is a PhD candidate in history at UCLA. He in fact holds his PhD from UCLA. HNN regrets the error.