Canadian Historians: Come Clean About Your Relationship with Big Tobacco

Daniel J. Robinson is a historian and associate professor in the media studies program at the University of Western Ontario. He is writing a book on twentieth-century cigarette marketing in Canada for McGill-Queen’s University Press. 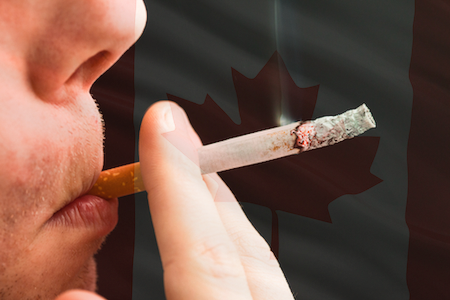 Later this month, Acadia University historian and former Dean of Arts Robert Perrins will testify in a Montreal courtroom on behalf of the tobacco industry. There he will discuss his 400+-page expert witness report on the Canadian government’s handling of tobacco issues since the 1950s.  The year-long trial involves two class-action suits seeking to compensate Quebec smokers for nicotine addiction and disease caused by smoking. The combined claim at $27 billion is the largest in Canadian history.

Perrins will follow two other historians who provided similar testimony at the behest of cigarette firms. Jacques Lacoursière, a broadcaster and popular historian, and David Flaherty, a retired historian from the University of Western Ontario, testified about media coverage of cigarette smoking since the mid-1900s. Flaherty, it was revealed, has consulting for tobacco companies since the 1980s.

Why have tobacco companies commissioned this historical research? Cigarette makers contesting lawsuits have sought to establish that since the early 1960s it was "common knowledge" that smoking caused cancer. Since "everybody knew" this to be true, people who chose to smoke did so fully aware of the health risks, absolving tobacco companies of negligence or wrongdoing. To prove this in court, they have hired historians to document, for example, that a plaintiff's local newspapers ran articles on smoking and disease around the time that he or she began smoking.

History's role in Canadian tobacco litigation will likely grow. Nine provinces are suing tobacco firms to recover smoking-related medicare costs. Ontario’s claim alone is for $60 billion. Since tobacco-related illness typically develops decades after smoking initiation, this means investigating the historical context of cigarette use as early as the 1950s. Cue the historians.

Two observations stand out. First, none of the tobacco-financed historians has published on the tobacco industry or cigarette smoking. In a highly specialized academic discipline like history, they would seem oddly qualified. Perrins is a historian of East Asia, not Canada. Flaherty is a historian of the United States and an expert in privacy law. There is no mention of this tobacco research, which likely consumed hundreds of hours, on faculty member profile pages. "Under-the-table" research like this sidesteps the scrutiny of peer review and scholarly criticism. Their status as "expert witnesses" would seem entirely a function of tobacco firms paying them to act as such.

Second, the tobacco-financed reports form one of the largest extant bodies of historical work on this topic for the post-1945 period. With a couple of exceptions, little has been published. How is that, given the topic's importance for public policy and high-stakes litigation?

This type of research is costly and time-consuming. It involves combing through dozens of print and broadcast sources spanning decades, often in non-indexed media. It's labor-intensive, requiring paid research assistants. The tobacco industry has deep pockets and its commissioned reports to date constitute a preferential "first draft" of cigarette smoking history for the post-1945 era in Canada.

One possible solution is the Social Sciences and Humanities Research Council, the federal agency which funds this type of research. This option is precarious. The applicant success rate is about 20 percent. The application process requires 60 to 80 hours.  In the past decade, SSHRC has reduced considerably its spending on tobacco-related projects. Since 2005 it has awarded $33 million in research grants, none of which have dealt with historical tobacco use.

The motto of Acadia University's Faculty of Arts is "Developing Critical Thinkers and Ethical Leaders for a Complex World." In 2009, then-Dean Perrins offered these words to Acadia students: "At their core, the arts play a central role in helping us to develop individual and societal senses of moral responsibility.”

May I suggest to Professor Perrins and colleagues working sub rosa for the tobacco industry that they demonstrate “moral responsibility” and “ethical leadership” by owning up publicly to what they have largely done privately. Cite your tobacco work on faculty web pages. Tweet about it. Publish your findings. Write a piece for History News Network. Come in from the cold.