The Case for Sparing the Rosenbergs 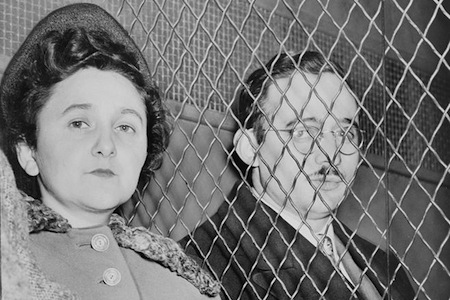 Sixty years ago this week, Ethel Rosenberg was strapped into the same electric chair that killed her husband Julius moments before. Her gruesome death ended the spy case that captured worldwide attention. Julius Rosenberg had been arrested and charged with conspiracy to commit espionage, specifically passing atomic bomb secrets to the Soviets.

FBI Director J. Edgar Hoover had also ordered the arrest of Julius’ wife Ethel, hoping to use her as a “lever” to get Julius to name other spies. He never spoke. They both died instead.

The grisly executions of Julius and Ethel Rosenberg in 1953 made their sons orphans and shocked the world. The Rosenbergs remain the only married couple executed for a federal crime and the only civilians killed for spying.

Then, as now, Americans face the challenge of the federal government targeting citizens. Last month, President Obama publicly acknowledged for the first time that he ordered the drone strike execution of an American citizen without trial. Actually four Americans were killed but only one -- Anwar al-Awlaki -- was specifically targeted. Whether executing Communist spies in the Cold War or killing suspected terrorists in the War on Terror, it’s time to consider some common themes.

While the parallels between the Cold War and the War on Terror are often overstated, the power of fear is a common denominator. Few Americans need to be reminded of the fear that resulted from the attacks of 9/11, yet the paranoia characteristic of the early Cold War years is more distant. Americans feared nuclear war was imminent when the Soviets tested their first atomic bomb in 1949. Schools implemented civil defense systems and teachers across the country instructed children to “duck and cover” in case of a nuclear attack. Other sorts of quixotic and ill-conceived ideas grew from Americans’ fear of world Communist domination and a nuclear apocalypse. Nations around the world were terrified of escalating tensions between the U.S. and the U.S.S.R. that threatened their very survival.

The Cold War turned hot in 1950 with the eruption of hostilities in Korea. The judge in the case blamed the Rosenbergs for instigating “Communist aggression in Korea” and sentenced them to death.

We know Julius Rosenberg ran a large spy ring. Ethel Rosenberg was cognizant of her husband’s activities but not an active spy. Whether they deserved death instead of years in prison is debatable. If the threat of execution was intended to get them to name other spies, it failed.

Once dead, suspects are of little use. They don’t sit in prison, crack under the strain, and name members of their spy ring or terrorist cell. They don’t provide intelligence that exposes other espionage networks or terrorist groups.

The value they often provide is for the other side. They are enshrined as martyrs to the cause where they provide a vivid example of how difficult it is to win hearts and minds around the world.

During the Cold War the potential of mutually assured nuclear destruction necessitated nonmilitary modes of combat -- specifically psychological warfare efforts to win friends. In order for the U.S. to achieve a global propaganda victory in the Rosenberg case the world had to believe the couple was guilty and the American judicial system was superior. As in any good advertising campaign, it was the perception of reality that was important. Democracy was the product; America was the brand.

But even Eisenhower struggled. Protests against the execution of the Rosenbergs spread in 1952 and 1953. Objections began with Communists and Socialists but soon even pro-U.S. anti-communists around the world joined in. When Pope Pius XII publicly decried the killings, countless Catholics joined him. Ultimately tens of thousands from over forty-five countries sent letters, signed petitions, wrote editorials, and protested in front of American embassies to save the lives of the couple. In executing the Rosenbergs, the Eisenhower administration failed to win hearts and minds in countries around the world.

Today we face an even more daunting public relations challenge. How do we explain to the world that family members caught in drone strikes were necessary casualties of our War on Terror? We will never know how many angry Muslims -- enraged by al-Awlaki’s killing or the killing of any number of “suspected” terrorists -- now vow revenge and join al Qaeda. These attacks continue to harm the image of the United States and it’s likely not worth the cost.

Conversely, at the height of the Cold War in the early 1950s, we as a nation had the wherewithal to arrest, try, convict, and execute two individuals considered fatal to our national security. It was a rigged example of justice, but it at least gave the illusion of fairness. For the Rosenbergs there was a trial and subsequent paper trail. Anwar al-Awlaki was far less fortunate.

Whether Americans are convicted spies or accused terrorists, they deserve the protections accorded to all citizens under the Constitution. Due process of law means nothing if only used when convenient. As the Rosenberg case reminds us, using the court system does not necessarily guarantee justice but circumnavigating the Constitution ensures far worse.