What If Robert E. Lee Accepted Command of the Union Army?

This article is adapted from Thomas Fleming’s new book, "A Disease In the Public Mind – A New Understanding of Why We Fought the Civil War." 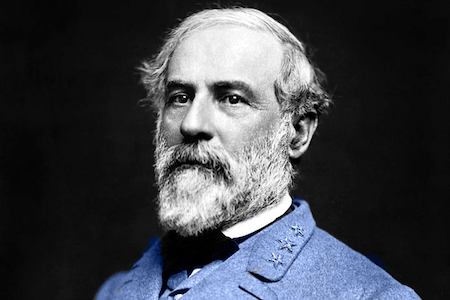 The United States of America trembled on the brink of her greatest tragedy -- a civil war that would kill a million young men. Seven Southern states had seceded after Abraham Lincoln was elected president as an anti-slavery Republican, with scarcely a single Southern vote. They had been unmoved by his inaugural address, in which he warned them that he had taken a solemn oath to preserve the Union -- and reminded them of their shared heritage, witnessed by the numberless patriot graves in every state.

When Lincoln tried to resupply Fort Sumter, the Federal fort in Charleston, South Carolina’s harbor, the secessionists had responded by bombarding it. The president summoned an army of 75,000 men to suppress an unquestionable rebellion -- and asked Colonel Robert E. Lee of Virginia to take command of it. Suddenly Colonel Lee -- and the nation -- confronted one of the most crucial turning points in American history. What would have happened if he had accepted the president’s offer?

Colonel Lee had repeatedly said that he believed secession was treason. It had now been compounded by firing on the American flag. Virginia, the largest state in the Union, had not seceded. Her voters had elected a convention to make this fateful decision. Well over half the delegates publicly opposed secession.

North Carolina, long considered Virginia’s political satellite, also had not seceded. Nor had Arkansas, a state with strong ties to Missouri, which had similarly refused to secede. Nor had Tennessee, Kentucky, Maryland and Delaware -- all states in which slavery was legal. In many seceded states, such as Georgia, secession had passed by only a handful of votes.

In Virginia, many people thought the state’s decision depended not a little on what Colonel Lee would do. Thanks to his exploits in the Mexican War, he was the nation’s most famous soldier. General Winfield Scott, the commander in that war, said Congress ought to insure Lee’s life for 5 million dollars. Now his old commander enthusiastically backed the president’s offer. He said Lee was worth 50,000 men.

Many people regarded Lee as George Washington’s heir. He was married to Washington’s great granddaughter Mary Custis. When he was not on duty, he lived at Arlington, a house that was crowded with Washington relics -- pictures, furniture, articles of clothing. Lee’s father, Henry “Light Horse Harry” Lee had been a famous cavalry leader in the American Revolution and one of General Washington’s favorite soldiers. As president, Washington had chosen Lee to head a 15,000 man army that marched into western Pennsylvania in 1794 to crush the nation’s first attempt at insurrection, the so-called Whiskey Rebellion of the state’s western counties against the government’s tax on spirits.

What would General Lee have done, as the head of the Union Army in 1861? We know what General Scott was thinking at the time. Scott had recommended to the president the approach that had worked for President Andrew Jackson in 1833, when South Carolina threatened to secede. Jackson had sternly warned them they were committing treason and promised to have an army of 50,000 men in the state within a matter of weeks.

Along with the threat of a direct invasion, General Scott had recommended the creation of satellite armies in the West, which would seize control of the Mississippi and threaten to invade the South from that side of the continent. Impatient critics derided this as “The Anaconda Plan.” But it too was part of the strategy of winning through intimidation.

Crucial to this approach would be the retention of Virginia in the Union. No one was better qualified than Robert E. Lee to make a direct appeal to his state’s loyalty. He could, and very probably would, have invoked the spirits of Presidents Washington, Jefferson, Madison and Monroe -- Virginians all. Madison would have been an especially effective name. He had advised President Jackson to crush South Carolina’s 1833 secession without hesitation or mercy. As the “father of the Constitution,” Madison spoke with authority when he declared there was no legal or moral basis for secession. Above all Lee could have cited President Washington’s appeal in his farewell address. He had called on all Americans to treasure and defend their union as the primary achievement of their struggle for independence.

Would the wild men of South Carolina, the first state to secede in 1860, have defied General Lee’s appeal? It was possible, even probable. Lee would have confronted a major problem if he was forced to invade the Palmetto State. His army would have had numerous soldiers from New England, who had a violent hatred of southerners and slavery. Many were abolitionists, committed to immediate freedom for the South’s 4 million slaves. They had painted slave owners as sadistic monsters unworthy of mercy. Would General Lee be able to restrain them from abusing and even massacring Southern civilians?

Almost as violent as the abolitionists’ hatred of Southerners was the Southerners’ hatred of these fanatics, Fear of a race war throbbed deep in the Southern public mind. Here General Lee would have turned to President Lincoln and let him address these inflamed Northern volunteers. The president would have reminded them that only six percent of the South owned slaves. Even these men were not guilty of a crime. As long as they remained peaceful, they could not be abused or insulted.

Simultaneously, Lee almost certainly would have organized his army so that his vanguard regiments were from Virginia and North Carolina. Southerners would have confronted fellow southerners, ready to give their lives for the salvation of the union. It seems a near certainty that if it came to gunfire, the first Virginian to fall would have inflamed the entire state with his sacrifice, making victory a near certainty.

Simultaneously, General Lee would have displayed his genius for the oblique attack, the flanking movement that overran the rattled enemy from an unexpected direction. Casualties would have remained low, as the Union Army advanced on Charleston. If the defeated secessionists retreated into that city, and called on the other seceded states for aid, Lee would have ordered one of the satellite western armies to advance to those states’ western borders.

Then would have come a pause, and a call for a negotiated surrender. President Lincoln would have offered his plan for a gradual emancipation of the south’s slaves, to be supervised by a federal commission and accompanied by compensation for the value of each man and woman. General Lee might have reminded his fellow Virginians that Thomas Jefferson Randolph, Thomas Jefferson’s grandson, had proposed such a plan to Virginia in 1833.

Thomas Jefferson Randolph was still alive. He was an old man, but Lincoln, shrewd politician that he was, would have offered him the chairmanship of the supervisory federal commission. Randolph would have almost certainly been enormously persuasive, from the sheer power of his name.

Large issues would of course, have remained to be settled. Where and how the freed slaves would live, for example, and whether they should be given the vote. But the lethal crisis that confronted the nation before Colonel Lee accepted President Lincoln’s offer would have been dispelled, hopefully forever. The spirit of Washington, the man who enlisted thousands of black men in his Continental Army in 1776, and freed all his slaves in his will, with orders that they be educated and trained in various skills, would have been invoked to guarantee a peaceful evolution.

The looming civil war would have dwindled to “the uprising of 1861.” General Lee would have remained in command of the Union army, ready to extinguish any and all flickers of revolt. By expertly mingling his troops so that Southern and Northern regiments served in the same brigades, he would have forged a new sense of brotherhood in and around the word Union. At the end of President Lincoln’s second term, it seems more than likely that the American people would have elected Robert E. Lee as his successor.