Steven Maynard is a lecturer in Canadian history at Queen's University in Ontario. He is co-chair of the Canadian Committee on the History of Sexuality. 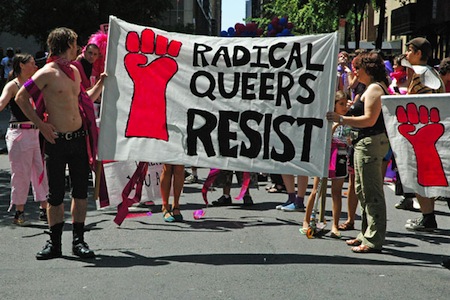 As many rejoice in the recent legal victories against DOMA and Prop 8, we’ve been asked to temper the celebrations with some reflection on the losses represented by the gutting of the Voting Rights Act and the setbacks to affirmative action. This is as it should be. But setting it up this way overlooks the need for some critical reflection on the gay rights rulings themselves and, in particular, on the role played by historians. With these important if limited Supreme Court decisions made, I’d like to look at the amicus briefs submitted in United States v. Windsor, particularly at the brief signed by twenty-three historians of the AHA. How can we characterize its politics, what are some of its limitations, and what are its implications for queer politics now?

The first thing to note is that in a case involving LGBT rights, the terrain covered in the AHA amicus brief is not for the most part queer history but the history of gender and sexuality more generally. This follows from the fact that the brief restricts itself to the subject of marriage. This differs substantially from the amicus brief submitted by the OAH. (One suspects a coordinated division of labor between the AHA and OAH in order to provide the Court with a range of argumentation. Still, the two briefs now circulate as distinct documents, and the differences between them are instructive.) The OAH makes its case by detailing “the historical record of widespread and insidious discrimination faced by gay men and lesbians, only one manifestation of which is the denial of equal marriage rights.” (6) Indeed, the OAH brief devotes only four of its thirty-seven pages to an explicit discussion of marriage, embedding them in a narrative of the many forms of anti-gay discrimination, something which I think more accurately reflects the relative significance of marriage in the lives of many LGBT people, if not in the political agenda of the mainstream movement, compared to other issues, such as employment, healthcare, or, say, voting and getting into college.

The AHA brief is in many ways a more conservative document. While demonstrating the historical malleability of marriage, the historians must uncritically embrace what the brief refers to as the state’s “purposes for and interests in” marriage in order to argue for the state sanction and inclusion of same-sex marriages. Put another way, in making their case against the Defense of Marriage Act, the AHA historians do so by defending marriage.

The brief’s authors suggest that “Throughout U.S. history, marriage has served … to facilitate the state’s regulation of the population; to create stable households; to foster social order; to increase economic welfare and minimize public support of the indigent or vulnerable; to legitimate children; to assign providers to care for dependents; to facilitate the ownership and transmission of property; and to compose the body politic.” (11) It would be hard to come up with a more succinct list of the problems with state-sanctioned marriage, gay or straight. So what is the historians’ purpose in making this list? Is it to critique the use of marriage to facilitate the state regulation of the population? No. Is it to critique the state’s economic interest in marriage and its related attempts to minimize public support for the indigent and vulnerable? No. Is it to critique the close relationship between marriage and property? No. Is it to challenge the notion that social order and the body politic should rest upon the marriage relation? No. Locked within the logic of the legal contest, the historians draw up this list of marriage’s multiple purposes not to critique them, but to deploy them to counter the opposing side’s highly selective take on the history of marriage and the state.

Further on the historians write, “State laws have purposely bundled social approbation and economic advantage into marriage, along with legal obligations, to encourage couples to create long-lasting rather than transient relationships and to build households upon them whether or not they produce children. States offer financial advantages to married couples on the premise that all marriage-based households promise social stability and economic benefit to the public.” (17-18) And what is wrong with this according to the historians? Is it that married couples have “social and economic advantages” over others? No. Is it the privileging of “long-lasting” relationships over “transient” ones (their word)? No. Is it what they refer to elsewhere in the brief as the state “favoring monogamy as a matter of public policy”? (9) No. Is it the link between marriage and “social stability,” a premise typically found in moral conservative discourse and left entirely unquestioned here? No. Is it the privileging of marriage-based households over households headed by individuals, single parents, and numerous other configurations? No.

For the authors of the brief what is wrong with all of the above is that “same-sex couples validly married in nine states and the District of Columbia” were unable to avail themselves of “federal married status and consequently of all federally-controlled economic and other advantages.” While the historians do indicate there have been some problems with marriage in the past, such as coveture and bans on interracial marriage, they would appear to see no problem with social and economic advantages being reserved for a certain segment of society other than that those advantages have been denied to LGBT people, or, more accurately, to LGBT people in married, monogamous relationships. Don’t get me wrong. Those denied benefits they ought to be entitled to should get them. But what about everyone else? LGBT people in so-called “transient” relationships, along with all others who live outside marriage-based households, are out of luck.

It will be said that this is merely a strategic use of the past and of the language of the law in order to make the case for LGBT equality. But acknowledging that the law demands to be addressed in a certain fashion doesn’t change the fact the brief is also a specific use of history to articulate a particular political position. And what is that position? The historians begin by stating that “Freedom to marry and free choice of marriage partner stand as profound exercises of the individual liberty central to the American polity and way of life.” (4-5) With their appeal to freedom, free choice, and individual liberty, the historians spell out in the clearest of terms a liberal politics. On the one hand, this is likely a rhetorical formulation designed to flatter the Court and its fetishization of the individual. On the other hand, it may also very well be a reflection of the historians’ own politics, something suggested when they include themselves in this “way of life” by referring to the liberties mentioned above as “our liberties.” (5) There is of course nothing wrong with this; these historians are ‘free’ to articulate their political position however they wish.

But any act of political positioning necessarily entails ruling out other perspectives, including, for my purposes, the queer-left critique of marriage and the state. The historians argue that “Being based on voluntary mutual consent, marriage is understood to be a contract—but it is a unique contract, because of the state’s essential role in defining marital eligibility, obligations and rights … The couple who agrees to join in mutual intimacy and obligation cannot themselves create a valid marriage; if they do marry, they cannot terminate their legal obligations by themselves, since the state is a party to their bond.” (7-8) Rather than critique the state’s intrusion into personal relationships, as any number of queer-left perspectives do, perspectives rooted in political traditions with rich histories that go unacknowledged in the brief, the historians must sanction the “essential” role of the state in intimate bonds in order to make the case for the legal validity and inclusion of same-sex marriages.

To take another example, pointing to the ways marital status and citizenship have been deeply entwined in American history, the historians indicate that “in a legacy of the sustained relation between marriage and citizenship, states grant marriage rights to certain couples and not others, and award married couples benefits and rights not available to other pairs or to single persons.” They go on to argue that even “when constitutional imperatives have eliminated sex and race inequalities from laws of marriage, the marital dimensions of citizenship persist.” (14) Rather than uncouple the sustained relation between marriage and citizenship, instead of offering a different vision of citizenship in which other pairs and single persons are not disadvantaged, the historians must endorse a fundamentally discriminatory institution and a narrow definition of citizenship in order to secure the place of some LGBT people within them.

Again, it will be said that these are politically expedient arguments made to achieve a particular legal goal, but such a view radically underestimates the cultural force of such arguments, particularly those wrapped in the authority of the Supreme Court, in setting the range and limits on acceptable political discourse, as well as in further bolstering marriage as the political issue of the LGBT movement. And this is really my point. The perspective on the history and politics of same-sex marriage crystallized in the AHA amicus brief both reflects and helps to reproduce a much broader and worrying process: the narrowing of the queer political field to variants of liberalism such that a left critique becomes increasingly difficult to voice.

In Canada, we’ve already been down this road. In the very short time since the legalization of same-sex marriage in 2005, the existence of a queer political tendency aimed beyond conjugality has been consigned to the proverbial dustbin of history. The normalizing power of gay marriage has already worked its magic; in what must be one of the most perverse developments in all of queer history, the onus is now on queer people to account for why we are not married.

Liberals invested in pragmatic queer politics and formal legal equality will dismiss all this as utopian. But as activist Amber Hollibaugh of Queers for Economic Justice put it in the wake of the recent Supreme Court decisions, “We need to build an agenda that isn’t practical. An agenda based on vision … [in which] not a single one of us would get traded for socioeconomic access or the achievement of short-term legal goals.” Such a vision, I suggest, is exactly what is needed to breathe new life into the history of sexuality and to counter the diminishing horizons of queer political possibility.