Simon E. Balto is a PhD candidate in history and Afro-American studies at the University of Wisconsin-Madison. 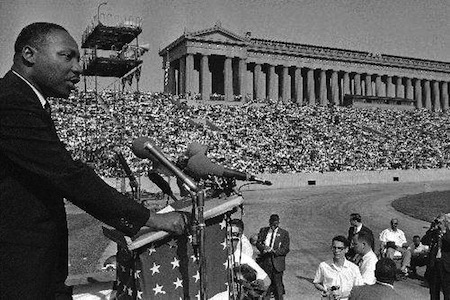 More than a hundred members of Chicago’s most notorious street gangs convened in a downtown hotel on a June afternoon. The Black P. Stone Rangers, the Gangster Disciples, the Vice Lords -- all were represented. In the ornate glamor of a Sheraton ballroom -- “an atmosphere of carpeting and candelabra,” one reporter called it -- gang heads sat alongside clerics and activists, lawyers and community organizers.

Martin Luther King, Jr. sat with them. His Southern Christian Leadership Conference had sponsored the meeting. The year was 1966. King and his allies in the Chicago community hoped to mobilize the gangs toward nonviolent direct action in service of the Chicago Freedom Movement. And they hoped to turn them away from the fratricidal violence that had recently begun tearing through the city’s black neighborhoods, where gunfire had become a soundtrack to the daily lives of many residents. 395 people had been murdered the previous year -- many of them in gang wars, almost all of them with guns.

The black community, even many gang factions, was outspoken in its wish for an end to the violence. The means to that end, however, were elusive. Gang leaders admitted that their members were wary of pledging non-violence before their rivals did. That same month, the Cook County State’s Attorney had tried to organize a weapons turn-in with the gangs, with only minimal cooperation from young men who were fearful of disarming themselves.

At the same time, some gang leaders also located the roots of violence in the city’s gross racial and economic inequalities. Some pointed to the need for jobs programs to put their membership to work. Others condemned the practice of double-shift schooling that was largely unique to overcrowded black schools, because it shortened the school day, put kids out in the streets longer, and increased truancy.

Community activists, for their part, didn’t absolve the gangs of blame. But similarly, they did often voice an understanding of the realities under which gangs formed and became violent – actions that Reverend John Fry, a controversial ally of the Blackstone Rangers, called a response to “life in an anti-democracy.”

The problem of escalating gun crime and gang violence also confounded Chicago law enforcement and city hall, for which unchecked violence threatened political consequences. Carried along by the rising tide of bipartisan law-and-order politics that soon extended from Ronald Reagan’s California to Nelson Rockefeller’s New York, Mayor Richard J. Daley responded with vigor. Legislatively, Daley and his police superintendent, Orlando Wilson, pushed the Illinois legislature for a stop-and-frisk bill and strict gun control laws. In the streets, they encouraged force. 1967 saw the formation of a Gang Intelligence Unit (GIU) within the Chicago Police Department to work toward disrupting gang activity. In its efforts, the GIU used surveillance, weapons turn-ins, inter-gang mediation, stop-and-frisk, and an array of other strategies. Among them were less savory, coercive measures, according to multiple gang members and community activists who accused the GIU of physical abuse, threats, and intentionally exacerbating inter-gang conflict. (A favorite strategy of some GIU officers was reportedly to drive a gang member around the city, and drop him deep in a rival gang’s turf if he failed to provide them with information they sought.)

Such aggressions and excesses worsened already poor relationships between police and community. Black Chicagoans, both gang-affiliated and not, became increasingly critical about invasive practices of stop-and-frisk, racial profiling, and harassment. Cooperation between police and the community became increasingly fraught and infrequent. And for all the controversy and bad will, the violence continued.

At the June 1966 gang summit, Dr. King asked Chicago’s gangs to channel their energies into nonviolent protest of poverty and inequality. He tried to imprint upon the young men gathered at the Sheraton that violence was futile, and would likely get them nowhere but a grave or a prison cell. Yet he, too, saw violence as originating in the glaring deficiencies of resources, services, and investments in poor neighborhoods of color. Echoing the proposals of other civil rights leaders and organizations such as A. Philip Randolph and the National Urban League, King called upon the government to put together a “massive Marshall Plan” for Chicago’s poor, to help rebuild poverty-ravaged communities in ways similar to the United States’ aid to European nations after World War II.

In recent weeks, gun control advocates have struggled to even keep the issue of gun violence alive politically. Last month, Vice President Joe Biden tried to rally and assure gun control advocates at the White House. Newark Mayor Cory Booker, meanwhile, tried to generate support for his Senate candidacy by promising to be an advocate in Congress. And gun violence victim, and former Arizona Congresswoman, Gabriel Giffords has continued her campaign for expanded background checks and other gun control measures.

As they do so, the history laid out above is worth recalling. The framework of national debates surrounding gun violence continues to be molded by large-scale suburban shootings like the tragedies in Newtown and Aurora. Yet the numbers and rates of non-suicide gun deaths are remarkably higher in urban areas than in suburban and rural ones, as a host of studies over the last decade and a half have demonstrated. In present-day Chicago, like in late-sixties Chicago or modern New York or Los Angeles, gun homicides are a daily occurrence. Although as the New York Times recently reported, murders in the city so far this year are, mercifully, down significantly, they still average one per day. And the summer, when violence is usually at its worst, has only just begun. At this writing, thirty-six Chicagoans have been murdered in the twenty-two days since the Times story, including a five-year-old and his mother. All but three of them have been killed with a gun.

This portrait of violence, both historical and contemporary, exposes the problems and limitations of our conversations about guns and gun control. Street homicides like those happening in Chicago won’t be fixed by an assault weapons ban or significantly curbed by shifts to the types of limited-capacity magazines that gun control advocates have pushed. Chicago, after all, already has some of the strictest gun control laws in the nation, and has nevertheless been battling the same problem of gun homicides for nearly five decades now. Murders are down since the 1970s, 80s, and 90s, but remain roughly on par with where they were half a century ago. Meanwhile, the city’s means of addressing the problem continues to be reactive, and punitively so. Mayor Rahm Emanuel’s current approach -- saturating the most dangerous areas with police -- brings to mind similar strategies that his predecessors in the mayor’s office have tried for decades. They have never been sustainable in the past; there is little reason to believe they’ll suddenly become so now.

Further common-sense regulation of guns is surely a laudable goal, as is better enforcement of existing statutes. But it is far past time to return to what Martin Luther King and gang leaders and liaisons were saying almost fifty years ago: to solve the problem of urban violence, we must address poverty and inequality. Jobs programs, school revitalization, infrastructural investment -- in addition to being good for the long-term health of our social fabric and economy, these are among the most powerful tools at our disposal in the fight against gun violence. Unfortunately, in an austerity age, inner-city investment finds little traction among political leaders. But if we as a nation are serious about our concern with gun deaths, it is no longer possible to keep ignoring these realities.

There’s a young hip-hop artist from Chicago named Chancelor Bennett, who works under the name Chance the Rapper. He’s twenty years old, and comes out of Chatham on the South Side. He is an expressive, jubilant performer and a sharp lyricist; he also happens to be one of the most powerfully articulate documenters of the violence pervading inner-city neighborhoods like his. In its darker moments, Chance’s Chicago resembles a war zone, or the aftermath of a hurricane. There are refugees, and no help is on the way. Violence reigns. “I know you’re scared,” Chance sings, “you should ask us if we scared, too. I know you’re scared; me too.” Fear and paranoia haunt the lyrics; fragility and fierceness mingle. But there is another overwhelming sense coursing between the lines -- abandonment. “They deserted us here,” he raps mournfully. The ‘they’ implicated in the lyrics, one senses, is very broad indeed.

For decades, that desertion he describes has been a dominant feature of the government’s approach to inner cities. Although fully ignoring the plights of poor urban areas was not quite what Daniel Patrick Moynihan meant when, in 1970, he encouraged President Richard Nixon to take a position of “benign neglect” around questions of racial justice, that has nevertheless been precisely what has happened. The ongoing proliferation of gangs in these areas, and the massive tolls of gun violence in them, are part of the reaping. If we care about gun violence, we must once again start to care about the inner cities.