Summer is the Season to Fix Immigration

Adam Arenson is an assistant professor of history at the University of Texas at El Paso. He is the author of "The Great Heart of the Republic: St. Louis and the Cultural Civil War" (Harvard University Press, 2011), as well as co-editor of "Frontier Cities: Encounters at the Crossroads of Empire" (University of Pennsylvania Press, 2013). He is currently editing a book on the Civil War era in the American West, and researching a book on the lives of African Americans who returned to the United States during the Civil War and Reconstruction, after the Underground Railroad. 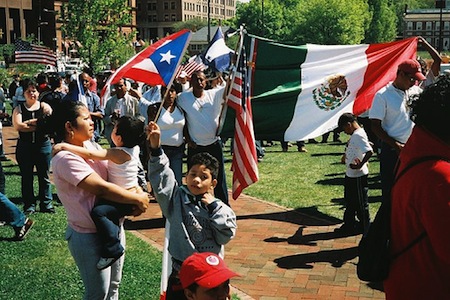 In the summer heat, the Senate was hotly debating who deserved a path to citizenship.

Members of the Republican Party were split over how to vote. Leading senators from Nevada, Illinois, and Massachusetts argued for the bill but wrangled over its amendments. Detractors, in their more uncouth moments, spoke of the immigrants’ race and religion, and the supposed proclivities and tendencies they imposed. The opponents wondered about how the potential new citizens would darken the face of the United States.

Others defended the immigrants, and spoke of their recent military service, and the principle that anyone who would fight for the United States should be allowed to vote for its leaders, through a naturalization process made equal for immigrants from anywhere around the world.

In the week before the Fourth of July, 2013, Senate Majority Leader Harry Reid, of Nevada, shepherded an immigration reform bill through the Senate, sent it to the more politically divided House.

On the Fourth of July, 1870, the more politically divided Senate made final alterations to a drastically changed naturalization bill that had come from the solidly Radical Republican House. For the first time, the bill granted to non-whites -- specifically, “to aliens of African nativity and to persons of African descent” -- the chance to become naturalized American citizens. On July 11, the Senate’s version of the Naturalization Act passed the House, and on July 14 President Ulysses S. Grant signed it into law.

The Reconstruction Amendments, the Naturalization Act of 1870, and the granting of women’s suffrage by Wyoming in 1869 and by Utah in 1870 are rightly celebrated as advances in the history of civil rights in the United States. As Abraham Lincoln had insisted in speech after speech, the nation had gone to war over the meaning of the phrase “all men are created equal,” in a debate over whether slavery could be limited and condemned, as Lincoln believed, or whether it was an absolute right of the white citizenry, as the Dred Scott case had implied.

But in 1870, the debate was also about exclusion. Charles Sumner of Massachusetts wished to see all racial classifications in the nation’s laws removed, by the deletion of the word “white” from the naturalization laws. (There were no federal immigration laws until 1875, so this debate centered on who could apply for citizenship.) But he faced vociferous objections from his fellow Republican senators from western states, where anxiety ran high that Chinese laborers would be allowed to naturalize.

Economics and local circumstances required this exclusion, senators argued. “Nobody, I presume, objects to conferring the right of naturalization upon men of African descent or of African blood,” declared Senator Oliver P. Morton of Indiana, summing up the nature of the debate, “but there is a feeling of dread in this country with regard to what might be considered an inundation or an avalanche of the vast population of China.” It was not about race, ability, or even religion, the exclusionists averred. In Africa there are “pagans, cannibals, men who worship beasts, who do not compare in intelligence at all with the Chinese,” offered Senator Lyman Trumbull of Illinois. But, Senator William Stewart of Oregon warned, the Chinese “could not be Americanized.”

In today’s debate, lines are drawn between those with technical skills, and those laboring in the fields; those brought as children and those who have arrived as adults; those with same-sex partners who are Americans and those who seek entry as individuals, or in opposite-sex relationships. The 1870 debates demonstrate how historical traditions, as much as race, economics, or skills, have been central to the political decision of who can become an American, and how.

It was the experience of the Civil War and emancipation that compelled the 1870 changes for a Reconstruction Congress. After controversy, a national consensus on emancipation, and the valor the U.S. Colored Troops was celebrated. The 1870 naturalization law was part and parcel of the Reconstruction reforms. Specifically, it was crafted to grant rights to the children and spouses of fugitive slaves who had gone to Canada, Liberia, Jamaica, Mexico, or elsewhere, and who had returned in war or peace to participate as full American citizens.

Naturalization for all black as well as white immigrants could only proceed with a firm bar on Asian immigration -- and some experiments with counterbalancing non-white voters with white women, as in Wyoming and Utah. Senator Samuel Pomeroy of Kansas, arguing that “I could find you a Chinamen who fought” for the Union, sought to join Sumner in removing all exclusions, but it was not politically feasible. He comforted himself with the hope that “Revolutions of this kind never go backward. No man would ever think of putting the word ‘white’ back again” into legal exclusions. The segregation of the Jim Crow era demonstrated just how wrong he could be, just as waves of nativist fervor have ebbed and flowed in U.S. history, focusing their fears on various ethnic and religious groups as the most dangerous “Others.”

Summer is the season for declaring Americans -- whether on July 4, 1776, as the nation came into being, or in July 1863, as the fight to end slavery intensified at Gettysburg and Vicksburg, or in July 1870, when the limited view of a whites-only America was first removed from the naturalization standards.

It seems that July 2013 may be added to that list of landmark summer months, for those hopefully awaiting new avenues to enter the United States, and to become citizens, with all the rights thereof. But we shall have to wait and see how this summer’s debate over immigration and naturalization -- and hence a conflict over the very nature of American identity and values, through inclusions and exclusions -- will be resolved. And we will wait to see whether the echoes of history will be something to cheer, or something to regret.