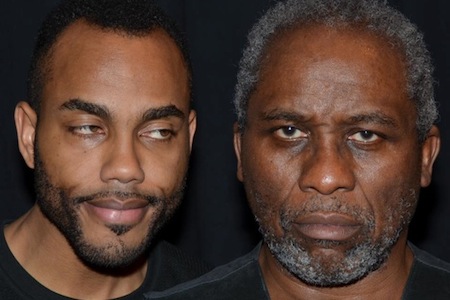 Each summer, the festival stages fifty or so plays of different varieties at the midtown theater complex.

There were five well known slave revolts in America prior to the Civil War: in New York in 1712, along the Stono River, in South Carolina, in 1740, in Richmond, Virginia in 1800, the Denmark Vesey revolt in Charleston in 1822 and the Nat Turner revolt in Virginia in 1831. Paul Gray’s new play, Tellin’ Man seems to be based most closely on the rebellion led by Gabriel Prosser in Richmond, Virginia, in 1800. In Gray’s play, as in the Prosser revolt, other slaves secretly told the owners of the rebellion and the slave owners worked with law enforcement to quash it.

The Tellin’ Man is the story of James, who betrayed his fellow slaves, and what happened to him, his family and his friends after the leaders of the revolt were arrested. It is a narrow focus play about slavery and the eternal hope of those in bondage that they could be free.

The trouble with the play is that it rolls along ever so slowly. It feels like it took the entire 240 some years of slavery to tell the story. The actors creep about the stage, sometimes reciting lines, sometimes staring at walls and sometimes moving props. There is a ghost in it, Boles, who was hanged earlier. He talks and talks and yet adds little to the story.

The play opens with a series of dreadfully stereotyped incidents. The master is threatening to sell off members of families to meet his bills. The overseer not only brutally whips slaves, but is having an affair with the wife of the man who turns out to be one of the leaders of the revolt. Then the rebellion is revealed and the master and his overseer break it up. The leader, Jeremy, is tied up and they decide what to do with him (the entire revolt seems to involve two people, by the way).

The basic story is a decent one, and there are some sharp turns in the plot, but the endlessness of the drama kills the play. The play needs to move along faster and the main characters need sharper definition. Director Christen Omantra Callahan needs to takes firmer hand in the story, develop his characters better and cut twenty or so from the script.

The history in the story seems a bit off, too. In the play, a Pinkerton detective, nattily dressed in a suit and hat, arrives to spirit the slaves away on the Underground Railroad. Allan Pinkerton, head of the agency, did use his Chicago area shop as a safe house on the Railroad, but there is not much evidence that his detectives traveled throughout the south liberating slaves. The head of the rebellion is not hanged, either, as all of them were historically. He is just tired up in a chair (without any rope, either).

The sparse set, with a cross and a few chairs, does not help the story. This play needs a bigger set with building interiors and exterior yards and trees so that the large drama it is trying to tell can function. I understand that all the plays in this festival are on small budgets, but this drama needs a better set.

The play stars Steve Aronson as the overseer, Angelo Angrisani as the owner, Arno Austin as James, Errol Greaves as Jeremy, Beverlix Jean-Baptiste as his wife, Winter-Lee Holland as James’ wife and Alexander . Mulzac as Boles, the ghost.

PRODUCTION: The play is produced by the Midtown International Theater Festival and its staff was responsible for the set, costumes, lighting and sound. The play was directed by Christian Omantra Callahan. The run has ended, but festival plays are often produced later throughout the country. Watch for them at a theater near you.