Hey Mitch Daniels, My Book is Dangerous, Too!

Peter Dreier is the E.P. Clapp Distinguished Professor of Politics and chair of the Urban & Environmental Policy Department at Occidental College. His book, "The 100 Greatest Americans of the 20th Century: A Social Justice Hall of Fame," published last year by Nation Books, is now in its third printing. 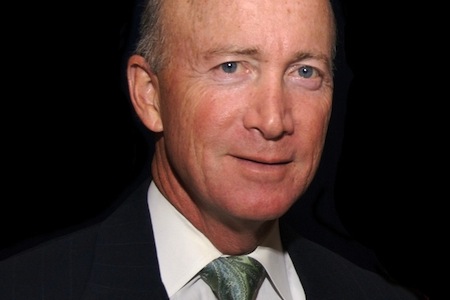 I've learned from recent news reports that thanks to your efforts as governor to ban Howard Zinn's book, A People's History of the United States, from Indiana classrooms, interest in and sales of the book have soared. Although you are no longer the governor of Indiana, but instead the president of Purdue University, I would like to introduce you to my book, The 100 Greatest Americans of the 20th Century: A Social Justice Hall of Fame, published last year by the left-wing Nation Books.

Not only does my book, like Zinn's, celebrate radicals and dissenters as the true heroes of American history, but Zinn is actually one of the 100 people I profile in its pages! Surely as the head of a prestigious university and as a concerned citizen, you will want to warn your university's board of trustees and professors, Indiana local school boards, school superintendents, and high school teachers -- as well as the governors of all 50 states -- about my book.

As you know, last month the Associated Press revealed the details of your anti-Zinn witch hunt. Apparently, you read an obituary of Zinn, the Boston University historian who died in January 2010 at age 87, and discovered that The People's History of the United States had become a popular text in high school and college courses.

As Indiana's governor, you felt a responsibility to email the state's top education officials, informing them that "this terrible anti-American academic has finally passed away... A People's History of the United States is a truly execrable, anti-factual piece of disinformation that misstates American history on every page." You then asked: "Can someone assure me that it is not in use anywhere in Indiana? If it is, how do we get rid of it before more young people are force-fed a totally false version of our history."

Ever since the AP uncovered your anti-Zinn witch hunt, copies of the book in Indiana libraries and bookstores have flown off the shelves, according to recent news stories summarized by CommonDreams. St. Joseph County Public Library, for example, which only had one copy of Zinn's book just weeks ago, increased the number to 19 due to patrons' interest; now all 19 copies are checked out and there are 10 people on a waiting list for Zinn's book. The same phenomenon is true at the Indiana University library in South Bend, even though the book isn't on any required reading list for the fall semester.

In fact, the publicity over your censorship efforts heightened interest in Zinn's book around the country, according to the Zinn Education Project, which promotes and supports teaching Zinn's work. Many academics, librarians and others -- including those who don't agree with Zinn's book -- raised hell about your attempts at censorship. Some have called for your ouster as Purdue president, while some conservatives, like those at American Thinker and National Review magazines, have applauded your stance.

Not since Matt Damon mentioned The People's History in a scene in the film Good Will Hunting, has the book gotten such a jolt of free publicity. Thanks to you, more Americans now know about and are reading Zinn's book. Always a fervent advocate of free speech and controversy, Zinn -- whom I knew -- must be smiling in his grave. (Ironically, it appears that your email attacking Zinn was plagiarized from other sources).

Let me warn you that my book, The 100 Greatest Americans of the 20th Century: A Social Justice Hall of Fame, may radicalize readers, young and old, by revealing that the most important changes in society came about because of the organizing, writing, and artistic efforts of progressive activists, politicians, journalists, novelists, theologians, academics, jurists, singers, and others. In fact, a major theme of my book is that the radical ideas of one generation are often the "common sense" of subsequent generations.

One of the people I profile in the book is your fellow Indianan Eugene Debs, an early 20th century labor organizer, member of the Indiana legislature, and Socialist presidential candidate from Terre Haute. Back then, he supported such radical ideas as women's right to vote, a federal minimum wage, election of the president by popular vote, and unemployment insurance. You can read about it in the 1912 Socialist Party platform, adopted at its annual convention in Indianapolis!!!

Look these folks up. They pushed for more rights for workers, women, immigrants and gay Americans, for stronger government protections for consumers and the environment, for an end to militarism, and for civil rights and civil liberties. Dangerous ideas!

I even included some left-wing governors, like Robert La Follette of Wisconsin, Hiram Johnson of California, and Floyd Olson of Minnesota.

Did you know that Theodor Geisel -- otherwise known as "Dr. Seuss" -- was a lefty? Read my book and find out, then warn Indiana's parents and librarians about this subversive author who encouraged children to challenge arbitrary authority. (Check out his book Yertel the Turtle, for example).

I'm pretty confident that my book's profile of organizer Bayard Rustin -- who was black, gay, a pacifist, and a socialist, and who was the key coordinator of the 1963 March on Washington for Jobs and Freedom, which took place 50 years ago -- is what persuaded President Obama to announce last week that he was awarding Rustin the Presidential Medal of Freedom, the nation's highest civilian honor.

But don't just take my word for it. In his review of my book in the radical magazine Dissent, David Moberg wrote: "I hope the book also gets in the hands of many Americans with ill-defined or even conservative leanings. It could change the way they think about the country's past and future." Bill Moyers said that the book "is both learning and fun." Jonathan Kozol called the book "A compelling narrative of the major social justice movements of the United States and the ways that high ideals are transformed into action. I've found myself caught up in the sweep of history the book encompasses and in the richness of the details embedded in each story. Terrific reading."

Frances Fox Piven said the book is "A great collection of gripping stories. A book you won't want to put down." Robert Kuttner described my book as "a timely and heartening reminder that America's most valuable citizens were resolute and inventive progressives. A wonderfully written antidote to this decade's choice between centrism and defeatism." John Atlas wrote that the book shows "how progressives and radicals inside and outside of the establishment made America a more livable and humane society." In Peace Review, Robert Elias, a political scientist at the University of San Francisco, wrote that my book "should be required reading."

The American Library Association's Booklist said: "Dreier has put his years of experience as a teacher, community organizer, government official, and journalist together to condense a century of astounding change and action into one volume." And Kirkus Reviews referred to the book as "A provocative collection that includes a timeline and a roster of up-and-coming contenders for a new century already showing signs of progress."

Yes, Kirkus Reviews is correct. My book not only profiles 100 great radicals and reformers of the previous century, but also includes a final chapter about the progressive movements and leaders of this century so far.

I know that subversive professors and teachers around the country, including Indiana, have assigned my book to their students. I have received many emails from students -- including some from Indiana -- who told me that my book inspired them to participate in various progressive causes, including movements to stop their states from enacting anti-union "right-to-work" laws, oppose the shutting down of Planned Parenthood clinics, fight laws that restrict voting rights, ban sweatshop-made clothing from university bookstores, support striking fast-food and Wal-Mart workers, limit the use of school vouchers and the creation of for-profit charter schools, protest "stand your ground" shoot-first gun laws, and lobby the Congress in favor of comprehensive immigration reform and raising the minimum wage.

As the president of a major university, and as someone who is still talked about as a potential candidate for President of the United States, you have a national platform.

I just have one request: Please don't wait to read my obituary to express your concerns about my book.