Marjorie Waters has been a consultant to the New-York Historical Society education department, writing and developing classroom materials for the Society’s major exhibitions. She developed a case study about William Dixon for the curriculum for New York Divided: Slavery and the Civil War, the historical society’s follow-up exhibition to Slavery in New York. This article is based on that case study. 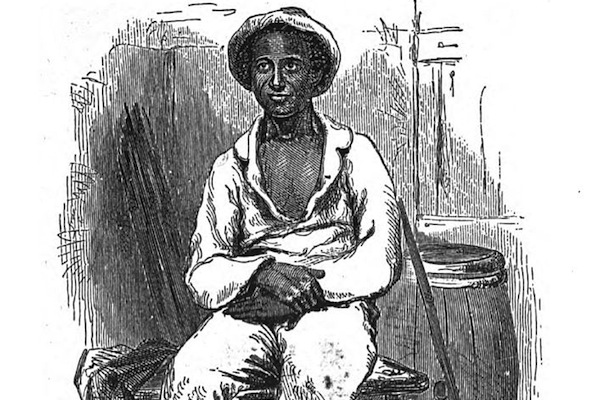 12 Years a Slave, the 1853 book and now a feature film starring Chiwetel Ejiofor, Michael Fassbender, Benedict Cumberbatch, and Brad Pitt, has made Solomon Northup the most well-known Northerner to be kidnapped into slavery, but he was not alone. Men, women, entire families, children -- all African Americans were vulnerable, whether they were escaped slaves or, like Northup, legally free. When Northup was seized in 1841, a kidnapping epidemic in the North was well into its second decade. Among the many victims was William Dixon, taken near his home on the corner of Hester Street and the Bowery in lower Manhattan in 1837.

Most runaway slaves were young men, and many set their sights on New York City. They were drawn by the density, especially below 14th Street, and by the numbers of free blacks. In 1830, just three years after slavery ended in New York State, Manhattan was home to a quarter million people, including some 14,000 African Americans. It was the largest black population in the North. But the city did not welcome fugitive slaves. Despite a growing abolitionist movement, the dominant atmosphere of New York was pro-Southern and pro-slavery, a product of the city’s deep involvement in the cotton trade. If runaways made it to this complicated place, they called themselves free, took new names, and kept their heads down.

Slave catchers knew that New York was fertile ground, and they prowled the city streets with the law on their side. The U.S. Constitution protected the right of slave owners to reclaim runaways, and the 1793 Fugitive Slave Law established the procedure. It required little more than a hearing before a U.S. judge or a local magistrate, and some paperwork. Those who interfered were subject to a $500 fine.

If a captive admitted to being an escaped slave, his or her fate was sealed. If not, the judge or magistrate made a determination, often relying on a vague description: “He is about 5 feet 10 inches high, about 30 years of age, very dark complexion ... large whiskers, and a sharp face.” Most hearings were over quickly, and captives could be on a southbound ship before family or friends knew they were missing.

William Dixon was a big, powerfully built man who earned his living as a whitewasher. On the morning of April 4, 1837, he picked up his brush and pail and said good bye to his wife. Minutes later he was seized by three men. One was a Baltimore policeman named Ridgely, and the other two were New Yorkers whom Dixon may well have recognized: Tobias Boudinot and Daniel Nash.

In the growing face-off between North and South, several Northern states wrote personal liberty laws to protect their free citizens from unlawful seizure, which Southern interests vigorously challenged. New York’s 1828 law gave fugitives the right to petition for the writ de homine replegiando, entitling them to a jury trial. The Committee of Vigilance championed this right, and the New York Manumission Society, an organization of prominent white men, provided victims with a lawyer. Help was available for captives, assuming they were not whisked away to a waiting ship.

For unknown reasons, William Dixon was not whisked away. He spent a week in Bridewell Prison, located in City Hall Park. This lucky delay gave anti-kidnapping forces time to prepare. The Manumission Society assigned lawyer Horace Dresser, and the Vigilance Committee publicized this latest capture. When Dixon’s hearing finally began on April 11, it was so crowded with his supporters that Recorder Riker had to move the proceedings out of his chambers and into a larger space in City Hall. The spotlight was on this case.

On the first day, Dresser petitioned for de homine replegiando, Riker set bail at $500, and William Dixon made a statement to the court. He said he was innocent, a free man. A. G. Ridgely made a counter claim: that “William Dixon” was a slave named Jake, owned by Dr. Walter Allender of Baltimore, and that he had run away in 1832.

On the second day, witnesses testified in support of each side. Several said they’d known Dixon in the North before 1832. A free black man from Philadelphia stated that he had known the captive all his life, known his parents, and visited their home. All the witnesses on Dixon’s behalf, and Dixon himself, had been coached to lie. The truth would have returned Dixon to slavery.

A crowd of black New Yorkers, estimated at 1,000 or more, gathered outside City Hall and waited for word. Many of them had likely been on hand when Riker heard another kidnaping case, just days earlier. Then they had watched powerlessly as the captive, who admitted to being a fugitive, was led away. Now they were agitated and determined. At the end of the second day of the hearing, the sheriff appeared, leading Dixon back to Bridewell. Uncertain how to read what they saw, the crowd surged forward. A voice called, “To the rescue!” Someone tossed Dixon a dagger and a knife and told him to run. He hesitated, then raced down Duane Street and hid in a basement, where he was easily recaptured. Justice of the Peace John Bloodgood, who was not involved in Dixon’s case, saw the commotion from City Hall, called for police support, and rushed out to help the sheriff. Instead he was attacked himself. A woman came up from behind and grabbed him violently around the neck. Other protestors tackled the justice and assaulted him. When police arrived, most of the attackers escaped into the crowd, but the woman and one of the men were arrested.

Months of legal wrangling over Dixon followed, covered by the white abolitionist press and The Colored American, New York’s new black newspaper. By July, Dixon’s supporters had at last managed to raise the bail. He was released from prison and secretly taken to Canada, where he was safely beyond Allender’s reach. He was still there in September, when Justice Bloodgood dropped charges against his attackers, noting that the woman was too ill to appear in court, and the man had died in Bridewell. Surviving records do not indicate whether they had contracted a deadly disease in prison, where infectious outbreaks were common, or had been beaten for assaulting Justice Bloodgood. But the mob action, and all the attention paid to Dixon, apparently rattled City Hall. In October, when Boudinot and Nash appeared with another captive, four magistrates refused to hear the case, Riker and Bloodgood among them.

Dixon spent four months in Canada. In November 1837, a member of the Manumission Society traveled north and brought him back to New York, possibly for a court appearance. For his supporters, and perhaps for Dixon himself, more than his personal freedom was at stake. They were looking to win this case and strengthen the legal defense of future captives. Still, Dixon could have remained in Canada, free, and he chose not to.

His case unresolved, Dixon returned to his home and went back to work. Several months later, on a New York street, he ran into someone from his slavery days, a Baltimore runaway who had just made it to freedom and was feeling indescribable relief. Dixon nervously told the man he was no longer known as Jake, and that Allender was trying to reclaim him. He warned the newcomer to trust no one, and not to go to the wharves for work or to a boarding house for a room. He said there were informers who would betray him to slave catchers for a few dollars. Seemingly worried that this vulnerable man might sell what he knew, Dixon soon vanished into the crowded streets.

Solomon Northup was a freeman, tricked and sold into bondage. William Dixon was an actual fugitive who was not returned to slavery. Dr. Allender may have been unwilling to spend more on an aging runaway, or he may have been urged not to give abolitionists a dangerous legal victory. Whatever the reason, Dixon’s case never came before New York’s highest court. Like Northup’s, his story was remarkable and rare. Most victims of kidnapping never saw freedom again.

In the 1840 census, William Dixon was listed as a free colored person living with his wife in their old neighborhood. But life was not easy in a city that still leaned so heavily toward the south. Dixon had challenged the Kidnapping Club, and won. But Tobias Boudinot, the club’s most powerful member, remained on New York’s police force, rising to the rank of captain. In 1850, William A. Dixon, occupation whitewasher, age 50, was listed in the federal census among the inmates of city prison -- the Tombs -- charged with an unspecified felony. The same year, the new Fugitive Slave Law preempted Northern states’ personal liberty laws and significantly strengthened the rights of slave holders. By then, the recent fugitive who met Dixon on the street had moved to Rochester and taken the name Frederick Douglass.