Is There Intelligent Life Among Republicans? 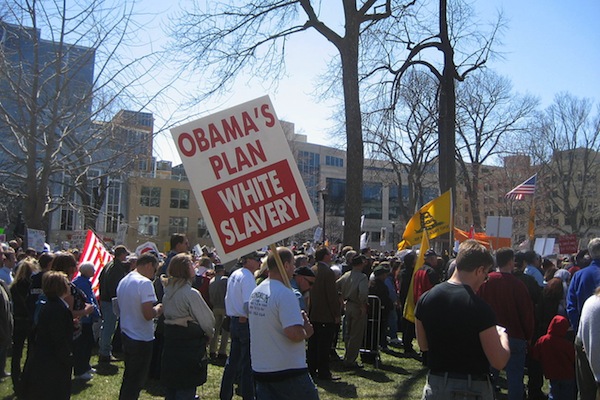 How on earth do Republicans expect to recapture the White House or gain control of both houses of Congress when the party has just received an approval rating of less than 25 percent of the American people, according to recent polls?

The party is in trouble because the far right -- from the Reagan era through the present -- has been so aggressive. And now, the extreme right has disgraced the Republicans by shutting the government and risking financial dishonor for the nation, even though a majority of Americans have expressed their outrage regarding these tactics in very clear terms. But majority wishes mean nothing to the radical right.

A half century ago, the Republican Party contained a significant range of opinion. Conservative Republicans like Barry Goldwater rubbed shoulders with moderates like Gerald Ford and liberals like Jacob Javits. The cost of this diversity within the party was tension, but its benefit to the Republicans was flexibility: depending on the moods of the voters, the party was positioned to offer different options. And its moderate center was firmly committed to the practical maintenance of government programs that most Americans had decided they wanted -- programs that, according to their own real-life experience, seemed useful or even indispensable.

Two years into his first term in the presidency, Dwight D. Eisenhower -- the first Republican president to be elected in twenty years -- told his brother Edgar what he thought of Republicans who wanted to shrink the size of the federal government to what it had been before the twentieth century.

“The federal government,” wrote Ike, “cannot avoid or escape responsibilities which the mass of our people firmly believe should be undertaken by it.” He continued: “Should any political party attempt to abolish social security, unemployment insurance, and eliminate labor laws or farm programs, you would not hear of that party again in our political history. There is a tiny splinter group, of course, that believes you can do these things. Among them are H.L. Hunt ... a few other Texas oil millionaires, and an occasional politician or business man from other areas. Their number is small and they are stupid.”

Ike was able to protect his party from stupidity. But today, he must be turning in his grave.

In the name of “conservatism,” the national program of the Republican Party has been dedicated in recent years to two fundamental propositions: (1) the proposition that most forms of government are bad, and that the federal government should consequently be shrunk through relentless budget-cutting to as close to the vanishing point as possible, using the plausible-sounding rationale of “fiscal discipline;” and (2) that the theological orthodoxies of certain kinds of Christians should be forced down the throats of everybody else.

The first of these two propositions has reduced mass support for the Republican Party to its lowest point in generations. The latest government shutdown -- the result of an obviously manufactured crisis that Republicans started -- has disgusted millions. There is a huge difference between bad-mouthing the reputation of government in general and shutting down services that millions of everyday Americans (or their friends or relations) depend on. Private enterprise is excellent when it comes to delivering certain necessary things, but it does many other things poorly, or else not at all. Government is often inefficient -- or worse -- when it comes to certain activities, but there are other things that it does supremely well, or at least it fills a void that would otherwise broaden into a dangerous chasm.

What is it that the anti-government Republicans really want? From the super-wealthy Koch brothers, who bankroll the tea party movement -- today’s billionaire counterparts to the H.L. Hunts of Eisenhower’s day -- to the grassroots ranters who applauded the shutdown, one gets the impression that all or most of these people believe that if the federal government were cut back 90 percent, the nation would prosper. One can only hope that they will never live to see what would happen in a land with no Federal Bureau of Investigation, no disaster relief, no air traffic control, no weather reports, no medical research to protect us from epidemics, no protection from tainted food or drugs, no relief for the countless people who will find themselves jobless down the years due to vast economic chain reactions. Is this what the Republicans want? If they ever get it, America will cease to be a modern or even a civilized nation and violence will probably break out all over the country.

The shutdown has given Americans enough of a foretaste to see the Republicans as they are: deluded. The delusion that the Koch brothers and the Tea Party have foisted upon the Republican Party -- if we ever allow it to shape our reality -- would beat this nation down to a way of life so primitive that it would be laughable to call it mere chaos.

It would be savagery.

And savagery is also what will happen if the religious right -- another political “base” to which the Republicans pander -- ever gets the power to act out its own destructive fantasies.

Most Americans, however religious they may be by the standards of the faith into which they were born, maintain a tolerant attitude. However deeply they profess what they believe, they also -- a lot of them -- acknowledge the mystery that underlies the existence of the cosmos, the miracle of life, and the force behind creation. When it comes to their own denomination and its differences with other denominations, they prefer to live and let live. If they are Christians, they sometimes acknowledge that Christianity over the centuries has spanned a broad range of behavior that stretches all the way from Quakerism to the Spanish Inquisition, and, humbled by this knowledge, they are glad to live in a land that protects different faiths.

But the Christian right in the Republican Party believes that certain doctrines, whether Protestant or Catholic in their packaging, should be forced to some extent upon everybody else in the land. Here again is a political vision that would usher in chaos and violence.

The Republican Party, for the better part of two generations or more, has made a devil’s bargain with the right. Republican moderates -- those who are left -- have allowed themselves to be bullied into silence, or at least acquiescence, by primitive, destructive, and -- let Dwight D. Eisenhower speak the word of truth -- stupid people. The conservative intelligentsia has failed utterly to provide decent guidance. However clever or learned conservative pundits may think they are, they are little more than conduits for bankrupt ideas. They cannot be redeemed by fancy polemics; they cannot get away with attempts to change the subject by foisting the blame onto Democrats.

Unless the sensible Republicans -- and there are probably still enough of them -- find ways to reassert themselves, their political prospects are grim.

When it comes to the complexities of life in a modern society, most Americans are sophisticated enough to see that the slogans of the Tea party are infantile at best and appallingly destructive at worst. There is no way for the Republican Party to gain the support of an American majority with further government-bashing in the foreseeable aftermath of the shutdown.

And when it comes to the blessings of a free society, most Americans are sane enough to see the religious right for what it is: a force that is un-American in its zeal -- its mania -- to persecute. There is no way for the Republicans to gain the support of an American majority by fomenting religious war.

And they cannot secede.

The cost of stupidity is failure. Is there any way out for the Republicans?