by Steven M. Gillon
Steven M. Gillon is the Scholar-in-Residence at The History Channel and professor of history at the University of Oklahoma. He is the author of Lee Harvey Oswald: 48 Hours to Live. 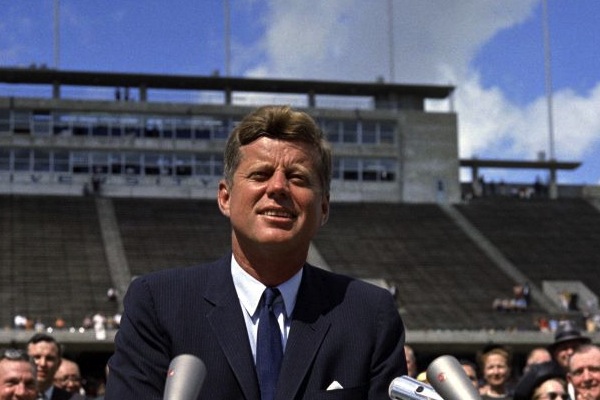 JFK at Rice University in September 1962. Image via Wiki Commons.

As we approach the fiftieth anniversary of President John F. Kennedy's assassination we are reminded of his enduring hold on the popular imagination. Once again countless magazine articles, newspaper stories, books, and television stories will focus on the man, his presidency, and his death. Politicians from both parties continue to invoke his name to sell themselves and their policies. Polls show that Kennedy is America's favorite president, ranking above Washington, Lincoln, and Roosevelt.

Public adulation of Kennedy baffles many historians who have spent the past twenty years assaulting the foundation of Camelot. The public sees him as a bold and gallant leader who inspired the young, helped the disadvantaged, pushed for civil rights, stood down the Russians, and added glamor and style to the White House.

In recent years, however, many historians have focused attention on Kennedy's shortcomings: the obsession with Fidel Castro, his reluctant support of civil rights, and the escalation in Vietnam. They have also probed beneath the glossy Kennedy charm and discovered a man who was dependent on prescription medication and who possessed an insatiable sexual appetite. Kennedy, a recent critic charged, was "deficient in integrity, compassion, and temperance." That is a harsh judgment, and certainly not one shared by most historians. Most would agree, however, that his short time in office prevented JFK from leaving a lasting legacy of accomplishment.

Why the wide gap between the way historians view Kennedy and how the public perceives him? Part of the problem is that historians have difficulty appreciating Kennedy's emotional impact on the public. Kennedy was the first president to use television to bypass the Washington opinion-makers and communicate directly with the American public. Television made obsolete traditional models which used legislative accomplishments to determine influence.

Because of the intimate relationship Kennedy established with the American public many people felt a sense of personal loss at his death. The assassination affected America unlike any other single event in modern history -- with the possible exception of 9/11. No American born prior to 1960 can forget where he or she was the moment they heard the news of the president's death. Seventy-five hours of television coverage helped create a shared sense of national grief. Four of five Americans felt "the loss of someone very close and dear," and more than half cried.

Inevitably, in the years that followed Americans have searched to give his death some meaning. Our refusal to accept that Kennedy's death could have been the result of a random, inexplicable act of violence has led us to search for more satisfying explanations. We refuse to accept that a loser like Lee Harvey Oswald could single-handedly kill a man as great as JFK. That search for meaning has lead to the creation of a mythical, heroic Kennedy. The thread that runs through most conspiracy theories, and permeates the popular view of JFK, is that nefarious individuals conspired to kill the president because he offered a new direction for the country.

But the Kennedy mystique is based on more than his photogenic qualities and his tragic death. In trying to understand Kennedy's appeal I am reminded of what our first professional biographer, James Parton, wrote about Thomas Jefferson. "If Jefferson was wrong," he wrote, "America is wrong. If Jefferson was right. America is right."

Since the Puritans came to America searching for deliverance from the corruption of the Old World, Americans have believed in national destiny. Thomas Jefferson declared the new nation "the last best hope of mankind." Herman Melville compared Americans to the biblical tribes of Israel, calling them "the peculiar chosen people... the Israel of our time." At the heart of this belief was a faith that the future would always be better than the past. America stood as the exception to the historical rules which dictated that great civilizations eventually peaked and crumbled. Devoid of the class conflict, racial tensions, and the imperial designs that characterized other civilizations, America would move inevitably toward realizing its divinely inspired mission to be "as a city upon a hill."

More than any president since FDR, Kennedy embodied these ideals of American greatness. Kennedy, like the nation he led, seemed larger than life. Every dimension of the New Frontier projected an image of strength and vitality: the inspirational rhetoric of sacrifice and idealism; the aristocratic elegance and democratic demeanor; the brilliant but compassionate advisers. Robert Frost captured the mood of the nation when he predicted that the Kennedy years would be an "Augustan age of poetry and power."

The tragic series of events that followed Kennedy's death challenged our faith in national destiny. A lost war in Vietnam and a crippling oil embargo reminded us that we could not shape the world in our own image. At home, racial violence, student protests, and government corruption revealed that America remained a deeply divided nation. During our time of trouble we turned to a heroic Kennedy for comfort. He reminded us of a time when America stood strong in the world, our nation felt united, and life seemed simpler. As the American dream slips further from the grasp of most people, as our faith in government and our hope for the future diminishes, we cling more tenaciously than ever to a mythic view of Kennedy.

We have transformed Kennedy into a metaphor of American greatness and judged all of his successors by that standard. Not surprisingly, they look dull by comparison. Politicians, eager to win the hearts of American voters, have tried to mimic Kennedy's style and to steal his message. Republicans have invoked Kennedy's memory to sell programs -- supply-side economics, for example -- that were antithetical to JFK's own policies. President Obama flexed his political and legislative muscle to push through legislation that was far more ambitious than anything JFK could have imagined, yet even he, and his accomplishments, appear diminished by the comparison to a mythical Kennedy.

Over the years, the public, which has grown cynical and angry over raised expectations and diminished results, has moved to the sidelines of American politics waiting for the "next JFK." Powerful, well-organized and well-funded, interest groups have moved to fill the void.

It is ironic that the memory of JFK would weaken political institutions. Kennedy won the presidency in 1960 by advocating change and, at least on a rhetorical level, he challenged us to confront old ideas. "For the great enemy of truth," he said in a famous Yale commencement address in 1963, "is very often not the lie -- deliberate, contrived, and dishonest -- but the myth -- persistent, persuasive, and unrealistic."

Ultimately, our fascination with Kennedy tells us more about ourselves, our deeply rooted beliefs and our need for heroes, then it does shed light on the man or his times. Kennedy was a very mortal man, very much a product of his times. In life he offered few solutions to the pressing issues of his time. His memory, burdened by the weight of myth, limits our ability to find answers to the problems of our own time.