The Secret Life of Teaching: Questioning

Horace Dewey is the pseudonym of a high school history teacher at the equally pseudonymous East Hudson High School on the unpseudonymous island of Manhattan in the City of New York. This is the second in a series of articles entitled "The Secret Life of Teaching." (Read Parts One and Two). 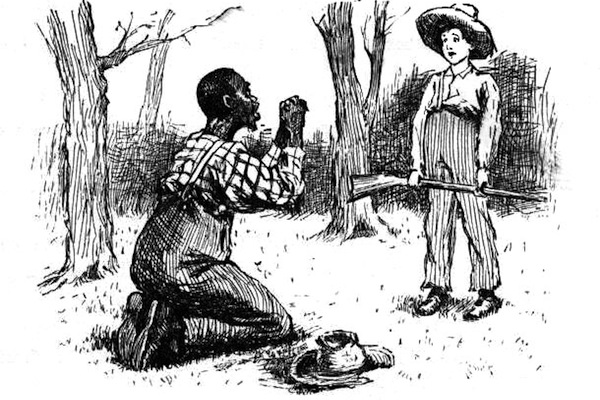 Late November: The Adventures of Huckleberry Finn. A few years ago, I teamed up with two colleagues in the English and Ethics departments to team-teach this Humanities course built around the theme of freedom. The course is divided into six units, each juxtaposing freedom with another concept that exists in some tension with it. So, for example, we open the school year with freedom and tolerance, in which we read The Scarlet Letter and study literal and metaphorical witch-hunts (like McCarthyism, allegorized in The Crucible, or the AIDS crisis, as depicted in Angels in America). Huck Finn is embedded in the transition between freedom/independence (the American Revolution, Transcendentalism, adolescent development) and freedom/slavery (Toni Morrison’s A Mercy, Phillis Wheatley, the Civil War). In every unit we juxtapose the literary and historical material with philosophy (Aristotle’s notion of slavery) and modern-day analogies (is modern-day sweatshop labor simply slavery by another name?).

It was a real challenge to get this course off the ground, and it took a couple of years of tinkering to get it right. Now it hums along, and there are times when I find it a little boring. When you do the same book year after year, you tend to get lazy; I haven’t actually re-read Huck in years. I’ve got a well-annotated copy I review as we get underway for about a two-week stretch of classes, and I’m probably one of the few people who uses SparkNotes for its supposed purpose: as a means to review the book (as opposed to a substitute for reading it). Actually, my main source of preparation for class, adopted at the urging of my tech-savvy colleage, is the online forum in which students are required to post passages they find interesting and to explain why. I’ll pluck out something I think has possibilities for close reading, or note if there’s a passage that seems to get multiple takers.

I’ve also got a few set pieces that I know from experience will generate a good conversation. One, of course, is the famous passage in Chapter 31, in which an anguished Huck, is torn between returning lost (human) property to its legal owner versus helping that property find his freedom. He finally decides on the latter: “All right, then, I’ll go to hell,” he says, ripping up the note he’d written disclosing the location of the escaped slave Jim.

So it is that when I walk in to the classroom for what will be my fourth discussion of Huck Finn on a chilly but brilliant autumnal day I’m a little rusty but ready to improvise. I’ve got to pocket Chapter 31, because it will be awhile before we get there. So instead I’ll ask the students to summarize the novel through the first eight chapters, which is a relatively easy point of entry as well as a device to jog my memory. So gang,” I ask, raising a steaming paper cup of coffee to my lips, “who is Huckleberry Finn?”

I sip in silence. Damn. This is a misfire: I intended a kid to say something like, “He’s a boy from Missouri who’s running away from his father and traveling with an escaped slave.” But it seems my query has been interpreted more interpretively and thus difficult to answer, as if I’m expecting something like, “He’s an empathic pragmatist in a morally corrupt social milieu.” I put my cup down on my desk, wait a beat, and say, “He’s a very blank person who blanks. Go ahead in fill in those blanks.”

Still nothing. And then Alba Montanez -- decent student though her last essay was all over the place -- blurts out, “He’s obsessed with death.”

I say: “Interesting, Alba. Can you elaborate a bit?”

Kim Anders -- volleyball team, got a 92 on the last test, litigated another three points out of me -- says, “Yes! I was thinking the same thing!”

Kim continues her interruption of Alba. “Well, his mother is dead, right? That’s like the first thing we’re told.”

“Yes, we’re told that. But where do you get the idea of this death fixation?” I know I sound little impatient, but I think it’s a fair question, and I think in any case that I can get away with posing it, even with some irritation, to Kim.

But it’s Alba jumps back in. “It says right here on page six that the widow read to him about Moses. ‘She let it out that Moses had been dead a considerable long time; so then I didn’t care about him; because I don’t take no stock in dead people.’”

“Hmmm. So the fact that he’s talking about a dead person -- says he doesn’t care about dead people -- is evidence of an obsession.” I make this a statement, not a question. I’m hoping I can gently jog her out of what I regard as a foolish assertion.

Instead, Alba says “Exactly.” I’m about to argue the point but stop myself. “What do the rest of you think? Do you agree with Alba and Kim that Huck has a death fixation?

I scan the faces in the room. Steven Gridley is looking out the window. Tommy Giddens is whispering to Zak Pacek. Tara Millberg is staring at her laptop. Evelyn Wu Wong is looking at me expectantly. She’s paying attention but clearly has no intention of jumping into the fray.
Tara, who has permission to take notes with the laptop but in all likelihood has been shopping for shoes, looks up. “He’s just so, what’s the word . . . you know when you’re just only reacting to what other people do --”

“Yeah, passive.  Like he’s so obsessed with what Tom Sawyer thinks.”

“Yes, but what does that have to do with being obsessed with death?”

There’s something incongruous about Tara Millberg -- lustrous hair, ruddy cheeks, fingernail polish that picks up the accents on her wool sweater -- talking about death. It seems so remote that she can barely talk about it coherently. And yet she’s not entirely wrong. And, sure as she sitting there, death, like that character in the Emily Dickinson poem, will be coming by to claim her. For the first time, I’m curious about what will happen in the meantime.

“I’m a little confused,” I say, returning my gaze to Alba. “How can you be obsessed with death at the same moment you’re saying you don’t put no stock in dead people? Isn’t that a contradiction?”

Alba narrows her eyes, taking the question in. Is she going to be able to parry it? If she doesn’t, maybe I can steer this conversation back on course -- or, maybe more accurately, out of the gate. I’m thinking the opening of Chapter 4, in which Huck talks about his schooling (he could “spell, and read, and write just a little, and say the multiplication table up to six times seven is thirty-five”). Can’t go wrong talking about education with high school kids.

But now it’s Sam Stevens -- Dad writes for the Times, apparently he’s a good guitar player -- who enters the fray. “What’s with the staging his death thing?”

“Yeah. When his dad starts beating him. He makes it look like he’s been killed.”

“Right. That’s how he makes his escape. It’s a means to an end. Doesn’t mean he’s obsessed with death, does it?”

I guess I did ask. Maybe these kids are on to something.

“I think Huck is depressed.” This from Dana Weiss. Figures. It’s not the first time I’ve heard therapy-speak from her. I remember her once referring to Arthur Dimmesdale of The Scarlet Letter as having low self-esteem. Tell me Mom isn’t a psychotherapist.

“Yeah. I think so. I actually read ahead a little bit to the whole Grangerfords and Shepherdsons clan war thing. That whole part about Emmeline Grangerford. After she dies Huck seems really upset. It’s interesting after the whole Moses thing Alba just read. It’s like this is the first time he allows himself to really grieve. And then he says something like ‘I don’t want to talk about it.’”

I’m a little stunned by this insight. My memory of the book is sketchy, but I know what Dana is talking about.

“Thanks a lot for giving the plot away!” Kim exclaims.

I’m about to try to explain to Kim that it’s not that big a deal when suddenly the fire alarm goes off. Damn. I remember the assistant principal telling me yesterday we’re behind on the quota that the state mandates. “Oh!” Dana says, genuinely upset. Steven Gridley looks like he’s just received a get-out-of-jail card. As per our protocol, we file out of the room and out of the building silently.

Shivering on the sidewalk, waiting for the all-clear, an essay question begins to take shape: Some observers of The Adventures of Huckleberry Finn (wink, wink) say that the Huck Finn we meet at the start of the story is suffering from depression, and in particular an obsession with death. Do you agree? If not, why not? If so, explain why -- and where, if anywhere, you think that begins to change. In what ways would you say his state of mind is shaped by his historical circumstances? Be sure to use evidence from the novel to support your thesis. Gonna have to think about the depression thing -- how to define it. Then again, let’s see if any of them do it. I’m always talking about defining your terms. Maybe a few of them will.

“Two down, six to go,” my colleague Eddie Vinateri says of the fire drills as we get the signal to head back into the building. After a pause, he gestures toward my clutch of returning students, a few of whom have, unaccountably, taken the book out with them. “How’s Humanities going?”