Why Do Conservative Southerners Loudly Insist That Kids Be Taught Lies about the Civil War?

Adam Laats is an historian in the Graduate School of Education at Binghamton University (SUNY).  He is the author most recently of The Other School Reformers: Conservative Activism in American Education (Harvard University Press, forthcoming Fall 2014).  He blogs about conservatism and American education at I Love You but You’re Going to Hell. 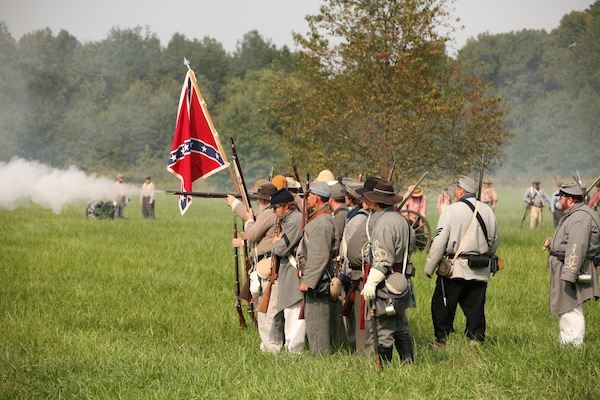 As Texas prepares to select its next group of school textbooks, activists and politicians have insisted once again that schoolchildren read hackneyed and debunked myths instead of real history.

Those of us who care about history and history education will be wise to study history ourselves.  In this case, the history of anti-evolutionism can offer lessons we can’t afford to ignore.

The story from Texas is all too familiar.  According to watchdog Texas Freedom Network, prominent activist Bill Ames is promoting a sadly familiar raft of myths for the new Texas textbooks, including the notion that slavery was not a leading cause of the Civil War.  Even though the Texas State Board of Education has tweaked the rules for textbook adoption, the upcoming debate over Texas’ new textbooks will surely include the input of influential activists who hope to teach new generations tired old myths instead of real history.

This is not only a Texas issue.  A few years back, for instance, Virginia’s fourth-graders read in their school textbooks that thousands of African Americans fought for the Confederacy.  And, as James Loewen argued so memorably, myths and distortions fill textbooks nationwide.

The battle over the history of race, slavery, the Civil War, and Reconstruction has a long backstory.  As historians such as David Blight and Jonathan Zimmerman have demonstrated, generations of activists and politicians have worked hard to occlude accurate history with politically palatable myths.

There is not much controversy about this among historians.  The notion, for instance, that large numbers of African Americans fought for the Confederacy simply isn’t true.  Yet historians’ knowledge has had little impact on classroom practice.  The author of Virginia’s fallacious fourth-grade textbook, for example, told the Washington Post that she had found her information about Confederate slaves from “Internet research.”  In Texas, activist Bill Ames denounced the “leftist education establishment” for ignoring the controversy over the real reasons for the Civil War.

But there is no controversy among historians.  At least, not the kind of controversy Ames suggests.  And we have a clear precedent for this insistence on teaching myths, lies, and distortions in order to include both sides of a false controversy.  Such arguments are the stock-in-trade of anti-evolution activists who hope to dilute the teaching of evolutionary theory in America’s schools.

Over fifty years ago, to celebrate the hundredth birthday of Darwin’s Origin of Species, paleontologist George Gaylord Simpson surveyed the evolution content of major school textbooks.  What he found appalled him.  Books taught a blend of religion, science, and bland platitude instead of real science.  “One Hundred Years Without Darwin Are Enough,” Simpson famously concluded.

When Simpson made his plea, it was the beginning, not the end, of our modern round of controversy over the teaching of evolution and creationism.  Recent surveys of America’s high-school science teaching show a disturbing number of teachers who include Biblical creationism as science.  Yet the difficulty of insisting on good science must not discourage historians from insisting on the teaching of real history in our classrooms nationwide.  Rather, it should serve as a call to arms.  As historian of science Judith Grabiner and secondary-school math teacher Peter Miller argued in 1974, the teaching of creationism alongside or instead of evolution resulted in part from smug satisfaction among scientists that the issue had been settled fifty years before.

We historians must not fall into a similar trap.  We must not take false comfort from the fact that no mainstream academic historians insist that there were large numbers of Confederate slave-warriors.  We must not delude ourselves into thinking that because some historical myths are obviously untrue, we don’t need to worry about them.  Biologists, geologists, and other scientists may reassure themselves about the intellectual emptiness of creationism, but that does not mean creationism won’t be taught.

Instead, historians need to take a page from scientists’ playbook.  We must encourage our national organizations to continue and increase their political activism.  The National Science Teachers Association (NSTA), for instance, had been formed in 1944, but it did not become active in evolution controversies until the 1960s.  Once it engaged the issue, the NSTA made a major impact.  For example, one NSTA friend-of-the-court brief in a 1968 case helped convince Supreme Court justices of the overwhelming scientific consensus about evolutionary science.

Historians, too, must not take this issue lightly.  Even given busy teaching and research commitments, every historian at every level must consider himself or herself an activist for history.  Activism does not always mean a full-time commitment.  And there is no silver bullet.  But we should all ask ourselves familiar questions.  For those historians who teach in colleges and universities, do we pay attention to the goings-on at the National Council for the Social Studies?  For historians teaching in elementary, middle, or high schools, have we joined an organization such as the American Historical Association or the Organization of American Historians?

For university historians, when’s the last time we took a colleague to coffee who works with pre-service teachers?  Asked about what goes on in local schools?  Attended a school-board meeting?  Visited a high-school history class?  For elementary and secondary historians, how long has it been since we’ve taken a college class?  Taken a summer seminar or listened to a podcast?

The upcoming debates over Texas’ schoolbooks are not only a Texas issue.  As the history of creationism can tell us, unless all historians make the issue their concern, we may find ourselves locked out of the histories most Americans learn.  As Grabiner and Miller concluded forty years ago about the sad state of biology textbooks, “no group with a deep interest in the content and quality of high school biology textbooks cared enough to exert counter-pressure on the publishers.”

Historians need to care enough to make sure that textbooks include real history and nothing but.