Day 1: Highlights of the Annual Meeting of the Organization of American Historians

Historians in the News
tags: OAH 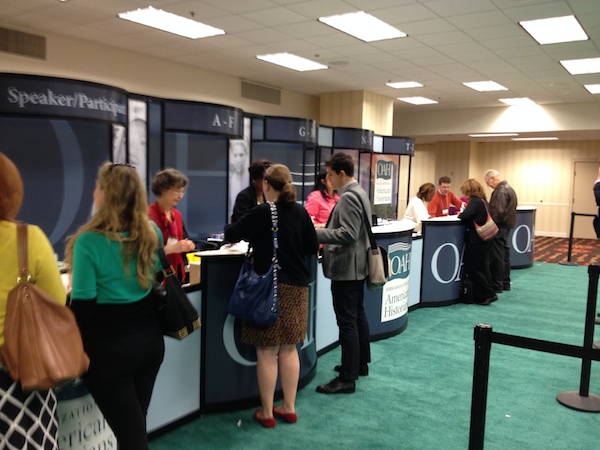 Related Link:  The 2014 OAH Annual Meeting:  Videos, News, Everything
Everywhere you looked there were historians.  To the left of you, to the right of you.  EVERYWHERE!  You'd think there was a convention or something.  Oh, there is a convention!  It's the annual meeting of the Organization of American Historians.  It got squeezed on the schedule of Atlanta between the plastics convention and the propane people.  I don't know what the meaning of that is, but surely there's a smart historian out there who can make something of this.  Historians can find meaning even in a grocery store line, as a historian did today who tweeted about the convention.
It always start with a line.  This year there are some 1800 historians queuing up for a chance to see people they haven't haven't seen in a year, to listen to papers they've never heard, and to catch a performance of an actor doing a Tom Paine imitation.  And that's just day 1.
Officially the convention started Wednesday, but it was today that the masses showed up.  Some came from as far away as Australia, Hungary, China an Japan -- and we don't mean the Las Vegas models of those countries you can find next to the Venetian.  These are real people from real countries a very long distance from Atlanta, Georgia.
What they are getting is the best a quarter million dollars or so can buy.  That's what officials estimate is the cost of this year's convention.  Some groused at the cost of renting a room.  It's $159 a night plus taxes.  But there was a surprise when they arrived.  The Internet is free!  (That's contrary to what OAH members were told when they called in to check before the convention.) 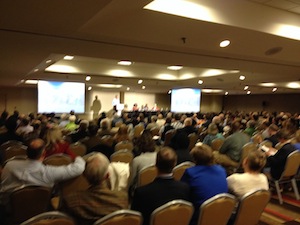 The highlight of the day was the first plenary session, a commemoration of the fiftieth anniversary of the Mississippi Summer Project, which was videotaped by CSPAN and will be broadcast in 2 weeks.  (We'll let you know when you can see it.)  UPDATE:  HERE'S THE LINK.  Charles Cobb, Jr. , an activist who joined Stokely Carmichael in fighting for civil rights, recalled that he'd thought the idea of sending white kids down to Mississippi was a bad idea. But the organizers were right to think that if you want to get America's attention, get their children involved. Recalling the losing fight to seat the delegation of the Mississippi Freedom Democratic Party (MFDP) at the 1964 Atlantic City convention, he said that Barack Obama owed his presidency to it.  If the MFDP hadn't waged its fight, losing and all, there wouldn't have been a black president two generations later.  He bitterly noted that LBJ pulled wires behind the scenes to keep the MFDP out of the convention.
Dorie Ladner held the audience spellbound with story after story of her upraising and struggle in Mississippi:  Her shock at discovering that there was a White Ladies bathroom for white women and a Colored Women bathroom for black women.  She remembered telling her mother as a teenager she had to go protest discrimination and than ran out of the house to catch a bus to Jackson before her mother could stop her.
Others on the panel observed that the struggles of the past aren't even past.  Mississippi is building a civil rights museum right next to the state's existing museum.  Mississippi Governor Haley Barbour's office issued a press release promising the facilities would be funded equally.  At this the audience of historians, well familiar with the Plessy v. Ferguson decision of 1896, let out a yelp of horror at the unintended irony.
And with that the meeting about came to a close.
comments powered by Disqus