Day 2: Highlights of the Annual Meeting of the Organization of American Historians

Two days down, two days to go.  That meant it was time to visit the Exhibition area.  There we encountered a historian taking a picture of her own book on display at her publisher's table.
Ok, we thought.  That's interesting, let's grab a snap shot.
But it was our delightful pleasure to discover that the historian, Clare Corbould, had a story.  Unless someone contradicts this, it appears she traveled the furthest to come to this year's OAH.  Twelve hours -- and that was just to get from home in Melbourne to LA.  Then it was another four hours on top of that. Here's her story in her own words:
A few steps more led us to Randall Miller.  He was seated behind a table on behalf of an organization whose name seems at least a century and a half out of date:  Historians Against Slavery.  Whaaat?  It turns out the group is focused on modern forms of slavery.  (Think of young girls forced to marry old men and you have the idea.)  Historians joined the effort to help put the struggle against this form of oppression in context.  Here's the story:

No sooner had we left the Exhibition Hall than we came upon this scene.  It's an historian with his shoes off, seated on the floor.  He's on the phone.  When he noticed our looking, he explained:  There's no escaping committee meetings just because you're at a history conference.  We snapped and went on our way. 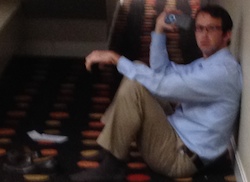 A short time later we ran into Maureen Nutting, whom we know from Seattle.  She was very excited.  She'd just returned from one of the scheduled tours.  It was a visit to the National Center for Civil and Human Rights, about a ten minute walk from the hotel.   (You can't miss it.  It's located right next to the Coca Cola museum. Coca Cola donated the land; coincidentally or not, the Center features an exhibit celebrating a landmark event Coca Cola President Robert Woodruff held in defiance of local racists.)  As she explains, the exhibits at the Center, which is not quite finished, were designed by the legendary George C. Wolfe, the former artistic director of the Public Theater in NY, in consultation with historians.  But we'll let Ms. Nutter explain:

As for today's panels, there seemed to be a theme.  Panels devoted to the work of historians drew a lot of historians.  This included the panels on Daniel Rodgers (48 in attendance) and Eugene Genovese (41).

The major event of the day was the late-afternoon Plenary session devoted to "historians and their publics."  The standout panel included Alan Kraut, Spencer Crew, Jill Lepore, Sean Wilentz, and filmmaker Shola Lynch.  Unfortunately, we can't show you a video as one member of the panel objected to cameras.  So you'll have to take our word for it that it was a great panel.  Wilentz, typically combative, said that historians should use their authority to police the public square.  When pundits and politicians (Glen Beck, they're talking about you) make stuff up about history, they should be called out.  Lepore said when she tried to do that very thing in her book on the Tea Party historians wondered why on earth she was bothering.

Wilentz got off a great line.  Historians, he said, "want to make the alien seem more familiar and the familiar seem more alien."  That was something all the panelists seemed to agree with.