Why the Revival of Nationalist Myths in Ukraine Should Alarm Us

by Tarik Cyril Amar and Per Anders Rudling 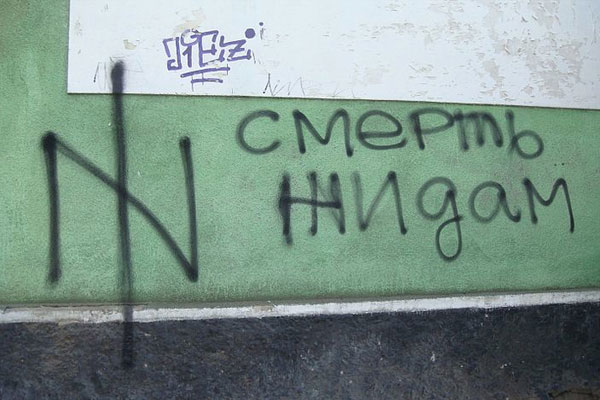 Recently, the relationship between Jews and non-Jews in Ukraine’s history, especially during the Second World War, has received much public attention. This is an important issue. Unfortunately, it has now been highlighted because it has been abused. Many observers have rightly pointed out that the massive media campaign Russia has launched to support its aggression against Ukraine has included an attempt to instrumentalize the issues of anti-Semitism and the extreme right. In return, not making things any better, some of the response to this transparent strategy has been too simple: if the Russian media say, there is a problem, there cannot possibly be one. This polarization is intellectually and politically useless.

In fact, it is crucial to understand that propaganda campaigns are not simply about spreading lies. An effect at least as nefarious is to force important issues into sterile dichotomies by fostering confusion, emotional side-taking, and distrust. This effect should be resisted. Refuting propaganda is important, but it has also been done extensively and it is not enough: if we only reiterate the simple facts that Ukraine is not a country of anti-Semites, that the Maidan revolution was not run by fascists, and that Russia has its own problems with anti-Semitism and right-wing extremism, we are still entangled in the insidious snares of propaganda, which stifle searching reflection and honest, productive debate.

If we shed the tit-for-tat logic of propaganda and refutation, the most important issue that comes into view concerns the history of Ukrainian ethnic nationalism during World War Two and its memory. Historian Omer Bartov has long pointed out a fundamental problem which substantial parts of Ukrainian society, in and outside Ukraine, still find hard to acknowledge: it is not possible to glorify ethnic nationalists as freedom-fighting heroes and examples for today and, at the same time, to be honest about their anti-Semitism, ethnic and political mass violence, and collaboration with Nazi Germany. It is true that this collaboration was less extensive than what it could have been, had Nazi Germany accepted the Ukrainian nationalists as allies the way it did with Slovakian and Croatian ones. Moreover, some Ukrainian nationalists also periodically clashed with the Germans and were persecuted by them. Yet there is no doubt or room for argument about a simple fact: the record of Ukrainian World War Two nationalism includes massive, politically motivated, and deliberate violence against civilians, including participation in the Holocaust and the mass-murderous ethnic cleansing of tens of thousands of Poles.

Initially, it was not post-1991 Russia that chose to turn this difficult, but by no means unique history of collaboration and violence into a simplistic myth for contemporary use. In fact, at the level of state policy, this decision was made by Ukraine’s first western-oriented president, Viktor Yushchenko, who came to power in 2005 and left office in 2010. Where Russia now seeks to spread an absurd tale of rampant fascism and antisemitism in the present, Yushchenko was promoting a no less absurd tale of the past’s far-right ethno-nationalists as unblemished heroes and innocent martyrs. Seeking ideological hegemony for this mythical version of history in today’s Ukraine, it was, in fact, Yushchenko who, ironically, also helped spread a stereotype equating Ukrainians with Ukrainian nationalists. In reality, the Organization of Ukrainian Nationalists (OUN) and the Ukrainian Insurgent Army (UPA), controlled by the Bandera wing of the OUN, were – within the context of World War Two – comparatively small and strongly regional organizations. Their massive, brutal effects during the war did not reflect popular support throughout Ukraine but the opportunities offered by the war and the nationalists’ ruthless, premeditated will to capitalize on them. In fact, far more Ukrainians fought against Nazi Germany – as part of Soviet forces – than for Ukrainian ethnic nationalism.

By equating ethnic nationalists with the nation Yushchenko not only accepted the nationalists’ own unfounded claims at face value. He also contributed to the polarization of Ukraine. Moreover, for observers at home and abroad, he burdened the image and substance of pro-western policies with a legacy of authoritarianism and mass murder that is, in fact, irreconcilable with them. In particular, his policies complicated Ukraine’s relationship with Poland; it was a Polish initiative, led by Members of the European Parliament from the otherwise pro-Ukrainian “Platforma Obywatelska” party that finally led to an EU protest against Yushchenko’s most egregious provocations. Only larger geopolitical interests ultimately outweighed these concerns: the glorification of the violent legacy of ethnic nationalism went largely unchallenged during the negotiations for the EU Association Agreement.

There was nothing inevitable or constructive about Yushchenko’s policy. Ukraine, like many countries, has a past that includes difficult issues. Its situation is made harder by four facts: like other parts of the former Soviet Union, it has been the victim of massive politically motivated violence under Soviets and Nazis. Secondly, the same nationalist organizations which committed terrible crimes also resisted the devastatingly brutal regime of Josef Stalin. Thirdly, Soviet postwar authoritarianism prevented unbiased research or open debate about this complex and traumatic history. Last but not least, a significant section of the Ukrainian diaspora abroad, have too often reflexively taken a right-or-wrong-our-freedom-fighters approach to wartime and postwar ethnic nationalists. Yet, at crucial points, these nationalists stood for forms of authoritarianism not much less aggressive than those of the totalitarianism behemoths.

Some émigré scholars selectively omitted compromising statements from nationalist pronouncements. In some cases the OUN’s deliberate forgeries have been circulated as authentic evidence to refute allegations of anti-Semitism. One of these consisted of an autobiography of a fictitious Jewish woman, Stella Krentsbakh or Kreutzbach, titled “I am Alive thanks to the Ukrainian Insurgent Army,” presented as “evidence” to “disprove” any and all genuine survivor testimony to nationalist anti-Semitism.A similar tactic has been used, with Yushchenko’s direct involvement, to deny nationalist involvement in pogroms in 1941. A popular rhetorical strategy to counter scholars querying nationalist narratives has been to implicitly or explicitly, publicly or more quietly denounce them as “neo-Soviet,” deceived by or pandering to former Soviet or current Russian propaganda.

Yushchenko, put differently, was not alone. In fact, his inability to face the reality of the past and his need to pro-actively employ the state to spread a myth that distorted the facts and undermined national cohesion reflected a broader phenomenon. As historian John-Paul Himka, an outstanding expert on the history and memory of Ukrainian nationalism, has put it with special reference to Ukrainian public discourse in the West, there is a “tremendous gulf” between it and the sources. Myth and denial have a strong and pervasive hold, even if they are being challenged more frequently now, especially by a younger cohort of historians. But Yushchenko could have acted differently; in fact, his predecessors did – by, at least, fudging the issue instead of making things worse.

In view of the heated nature of much recent debate, let’s be clear: It is not “moral equivalency” to state these facts and state them now and not later. It is an attempt to address an issue that complicates inter-Ukrainian relations at a time when they have reached their perhaps most critical point since independence. Enough time has been lost trying to “consolidate” the nation by imposing a false and detrimental memory on it. After 1991, the Soviet legacy of repression and the nationalist tradition of bias have both hurt independent Ukraine, if in different ways and to different degrees.

While Yushchenko no longer matters, his legacy of state glorification of ethnic nationalists has left Ukraine with one more burden to carry or, perhaps, shed. What is worrying at this moment and has, unfortunately, come to be linked to the Maidan Revolution is that several key promoters of nationalist memory politics have come into high office. Thus, Serhy Kvit, head of Kyiv Mohyla Academy, Ukraine’s most prestigious university, is now the Minister of Education. Kvit insists that the nationalists of World War Two can serve as examples for today’s Ukraine, demanding that this should be strictly separated from what he considers Russian propaganda. He is the author of an admiring biography of Dmytro Dontsov, one of the key theoreticians of Ukrainian ethnic nationalism. It denies and rationalizes Dontsov’s anti-Semitism and marginalizes his enthusiasm for Nazi Germany and fascist Italy. It also denounces John-Paul Himka as one of the leaders of an “academic Internationale of Ukrainophobes.” Such statements show that nationalist memory production deliberately cuts itself off from up-to-date international scholarship, in particular on the role of Ukrainian ethnic nationalism in the Holocaust.

Kvit has also participated in robustly nationalist public activism, promoting Dontsovian ideology through the “Dmytro Dontsov Research-Ideological Center.” In the 1990s Kvit was a member of the Presidium of the Congress of Ukrainian Nationalists and the organization “Tryzub imeni Bandery,” a wing of KUN which split from the party in 2000. He is open about the fact that he does not regard Dmytro Yarosh, leader of the “Right Sector” as an extremist. In 2012, Kvit forced the art exhibition “The Ukrainian Body” at the Visual Cultural Research Center of the Kyiv Mohyla Academy to close. Shortly afterwards, the Center itself was shut down. “The Ukrainian Body,” was a relatively rare attempt at addressing the issue of sexual minorities and the plight of homosexuals in Ukraine. At the same time, Kvit opened a “Center for the Study of Ukrainian State Building in the Twentieth Century.” No less controversial was his inviting historian Serhiy Bilokin to give the the prestigious inaugural lecture at the Mohyla Academy in 2012. Some students as well as Ukraine’s most important Jewish organization, VAAD, protested against this “invitation to a historian notorious for anti-Semitic views which he in no way attempts to conceal in academic and publicist writings.”

Kvit is not alone. Volodymyr Viatrovych, under Yushchenko director of the archives of the former KGB, is now the head of Ukraine’s Institute of National Memory. He has long been a key proponent of an uncritical and glorifying interpretation of the OUN and UPA. His publications, often written for a broad audience and little known in the West – but influential in Ukraine – have consistently downplayed the OUN’s anti-Semitism and the UPA’s anti-Polish massacres. Viatrovych has also publicly belittled the murder of civilians in Belarus by Ukrainian nationalists serving there as German auxiliaries.

Valentyn Nalyvaichenko has returned as head of Ukraine’s Secret Service, SBU, which, in Ukraine, is of immediate relevance for policies concerning twentieth-century history and public memory. He has shown less direct interest in history. Yet, during his first tenure as head of the SBU, he allied himself publicly with Yushchenko’s memory politics. The SBU presented an absurdly selective list of “the” 19 people responsible for the 1932-33 famine in Ukraine. Two fifths of the names on it were presented in the classically anti-Semitic fashion of “decoding” family names by adding the “real” Jewish name in parenthesis. Under his tenure, the SBU also produced an official number of 10,063,000 million victims of the 1932-33 famine in the Ukrainian SSR, a tripling of the consensus number by historical demographers. Such manipulation of what are terrible figures anyhow is not a minor issue but reflects a long-standing tendency to “compete” with the Holocaust.

Persons matter less than policies. Yet to see three public figures associated with nationalist memory politics and activism rise to important office quickly in post-revolutionary Ukraine is a reason for concern. It is true that the current government in Kyiv is provisional. Political and intellectual positions can also change. Ukraine has been under tremendous Russian pressure. Yet none of this means that it is helpful for scholarship or for Ukraine to overlook what could be the worrying revival of Yushchenkoist myth-making. Precisely because post-revolutionary Ukraine needs support and not further problems, it is high time to openly face the fact that the attempt to impose a neo-nationalist memory has done enough damage and needs to be left behind.