Reminding People of a Lynching Was What Bothered Them? 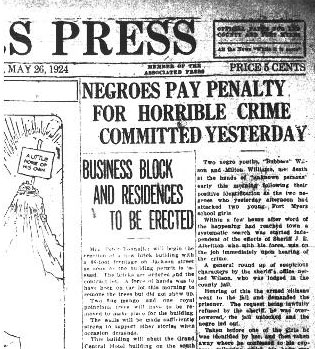 I recently contributed to items in the local press (see here) and on radio (see here) concerning the ninetieth anniversary of a particularly gruesome lynching that took place in Fort Myers, Florida, over the weekend of May 25-26, 1924. Predictably, some local respondents were not happy that this anniversary was being publicized. One disgruntled reader complained, "Just can't allow racism to fade away can you News Press? Instead of a piece relating how people of different races help each other because of their selfless goodwill (past or present), you all instead choose to keep alive a 90 year old evil doing by long since dead racist murderers." In this article I will demonstrate why such reactions are mistaken and why these events should continue to be analyzed and explored in public media.

The first reason to keep highlighting this history is that lynching arose from racist stereotyping, a menace that continues in the present day. In Fort Myers in 1924, two black teenagers, aged just 16 and 14 were seen skinny-dipping with two white female friends. The two boys were assumed to be guilty of rape. In an article published by Steve Dougherty in the Fort Myers News-Press in 1976, an eyewitness stated that one of the girls protested that the two boys were innocent of any wrong-doing, yet the boys were still lynched. The racist beliefs of the whites overwhelmed their willingness to view the evidence impartially. This has clear parallels with criminal justice today, where juries can be influenced by the fact that young black males continue to be depicted in some media as criminal and sexually aggressive, instead of being treated as individuals.

The second reason is that the historical record on lynching is incomplete and in need of correction. Although the NAACP did awesome work to keep records of lynchings, it often had to rely on newspaper reports that presented the events from the point of view of the lynchers. In Fort Myers, for example, the motive of the lynchers was recorded as being to punish sexual assault (rape), yet this assault existed only in the eyes of the beholders. No evidence was presented to establish that the lynching victims had committed the alleged crime. The name of one of the victims was repeatedly given as Bubbers Wilson, when infact the death records clearly show that his name was RJ Johnson, a fact that the black community knew very well.

Failure to verify such facts at the time shows the local contempt of authorities for justice and accurate reporting. These violations of the historical record should be corrected; it is surely our duty as scholars to attend to this.

A third reason to focus on such lynchings is to ask our students and readers to walk a mile in the shoes of African-Americans of both historical periods. A white student of today who places himself or herself in the mind of a black male from 1924 can better understand how a young black male must continue to have two "looking glass selves": a self that is reflected back to him by his fellow blacks, and one that is reflected back to him by a white viewpoint of suspicion and prejudice. Trayvon Martin spent his short life looking into these mirrors, which played a role in his death. Perhaps the student of today will be the juror of tomorrow, and the justice system is more likely to be seen to be doing its job correctly: treating all persons equally before the law, regardless of gender or skin color?