We Have a "Boy Problem" Alright, but It's Not New 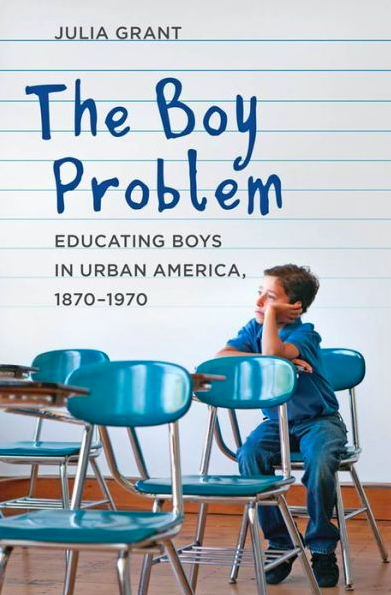 “Why are we pushing boys out of college?” someone asked me at a party. While figuring out what to say next, I conjured a vision of angry feminists guarding the doors to the academy and letting only young women and a few select young men inside.

I knew that there was no concerted or even covert feminist conspiracy to keep boys out of college. But it’s not surprising that my new acquaintance was perplexed by the gender imbalance that is becoming more pronounced on many college campuses. And no one at the table had an easy answer to her underlying question.  With headlines underlining the urgency of the problem of boys’ lagging school performance, one would think that we have reached a new cultural moment that is inherently hostile to boys.  But while urgent, the problem is anything but new.

Women’s equality is in no way responsible for a problem that has been with us since the genesis of compulsory education in the early 1800s, when experts began analyzing the “boy problem.”   Instead, equity for women has enabled us to see more clearly a problem that has long historical antecedents.  Prior to the relative equity by gender that we now have in schooling (the scientific disciplines still have a long way to go), in the past there were fewer women undergraduates, and even fewer pursuing prestigious career paths such as medicine, the law, and politics.

Women’s historical inequality has masked the fact that boys of color, immigrants, and the impoverished have swelled the ranks  of dropouts, delinquents, and special education students throughout the twentieth century and into the present.   Historically, boys have been at both the top and the bottom of the academic heap, while girls occupied the mediocre middle.  Dismantling the barriers to academic advancement for girls has meant that many of them are now moving well beyond the mediocre middle.

Now that college has become the new standard for measuring academic achievement, and the doors are wide open to women, the discrepancies between males and females are more noticeable. As of 2010, 57% of college graduates were female, in contrast to 42% of males.  The whopping gap between African-American males and females in terms of graduation rates is even more unsettling, with women receiving 65% of all college degrees.

Some of this gap may be attributed to the disproportionate suspension and expulsion rates among all African Americans, but particularly boys.   As of 2007, 16% of all black males had been expelled from school, in contrast to 1% of all white males—making prison a more likely outcome than college.

If the only problem was that boys were boys, men (mainly white and middle-class) would not continue to occupy the highest echelons of leadership, both in politics and business.   It is a misnomer to think of all boys as “at risk.”  If we disaggregate the data, it becomes clear that race and ethnicity are powerful predictors of which boys are likely to succeed in school and in society.

In the early part of the twentieth century, when schooling became mandatory throughout the United States, the “boy problem” was also a widely discussed issue. In his book Laggards in our Midst, published in 1913, social analyst Leonard Ayres lamented that boys were 17% more likely to be behind in grade school than girls, making a claim that is often reiterated today: “These facts mean that our schools as present constituted are far better fitted to the needs of the girls than they are of the boys.”

Many of the “laggards” that Ayres discussed were immigrant and working-class boys who regarded schools as punitive institutions meant to reign in their freedom to work and to play.   “School is for sissies” was the cry of many of a young delinquent.   Boys’ resistance to school sometimes landed them in pseudo-reform schools for truants from which many launched delinquent careers.   What we now call the school-to-prison pipeline was well established, especially for ethnic and impoverished youth.

Boys also outnumbered girls in early special education schools and classes. By 1918, the U. S. Office of Education reported that in classes for children who were deemed subpar intellectually, boys were twice as likely to be enrolled, often for dubious reason.

Efforts to confront today’s “boy problem” in public education suffer from a want of historical perspective.   Assuming that the problem is new, related to gains in women’s equality, or specific to a particular racial group, we have been slow to examine how ideas about masculinity intersect with social marginalization to make our least privileged boys more at risk of failure than their female counterparts.   Just as importantly, many contemporary schools and classes for boys promulgate assumptions about the nature of boys that have been with us for centuries.

In schools and programs that early twentieth century educators built for boys, they utilized male role models, tough love, and schooling in proper masculinity as solutions to producing successful young men.   Given the enduring character of the boy problem, it is time to discard time-worn truisms and re-think the role of gender, race, and class in creating and re-creating the boy problem.