“So Help Me God” and the Presidential Oath

David B. Parker is Professor of History at Kennesaw State University. He is the author of "Alias Bill Arp: Charles Henry Smith and the South's "Goodly Heritage" " (1993) and editor (with John D. Fowler) of "Breaking the Heartland: The Civil War in Georgia" (2011). 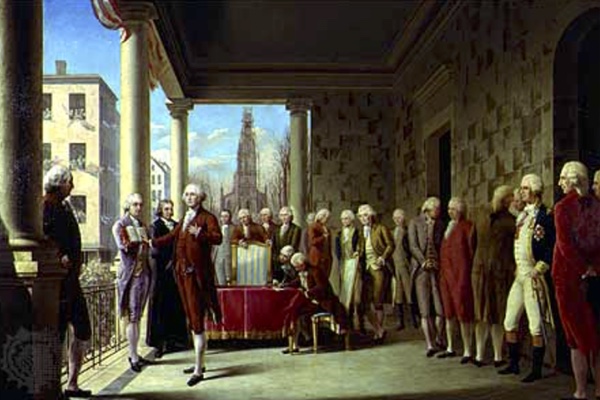 In 2009, Peter Henriques made a startling announcement in an oft-cited piece for History News Network: There is “absolutely no extant contemporary evidence,” he wrote, to support the traditional story that George Washington added the phrase “so help me God” to the presidential oath of office at his first inauguration. In fact, this story did not even exist until 1854, when Rufus Griswold included it in a book titled The Republican Court. (Griswold got the story, Henriques said, from Washington Irving, who as a six-year-old boy had watched the event from two hundred feet away.)

In a recent piece in Common-Place, the online journal of the American Antiquarian Society, I showed how quickly the “so help me God” story caught on after Griswold “reported” it. My methodology was simple: I used various online databases (Google Books, Internet Archive, American Periodicals Series, Newspapers.com, and others) to search for the phrase. It’s fairly easy to show that, before 1854, there are no accounts of Washington saying “so help me God” at the end of the oath (at least in the millions of print records covered by these databases). Then Griswold told the story. By the end of the 1850s, almost a dozen books and magazine articles had repeated it, and the numbers grew over the next few decades. “So help me God” quickly became the traditional story, a part of the American creation myth so accepted that, through the twentieth century, no one, including academic scholars, thought to question it.

When historians use the word “myth,” we don’t mean “a story that isn’t true.” A myth is an explanatory narrative that serves to unify a society, justifying its past and validating its present. The myth of the Lost Cause, for example, is a southern re-writing of history that defended the Old South, justified secession and the waging of war, and explained the Confederacy’s defeat. True or not, the Lost Cause myth became the Truth, the accepted story, and as such it greatly influenced the way white southerners viewed (and still view) their past.

So my interest in the Griswold story was not to discredit it; I don’t really care if Washington said “so help me God” or not. Instead, I wanted to show how quickly this became established in our national memory after 1854—to describe the “so help me God” story as an example of American myth-making.

Recently, we’ve seen another version of the “So help me God” story: not just that George Washington said it in 1789, but that every president added it to the oath of office. We know that the claim for Washington is problematic, and as it turns out, we have no convincing contemporary evidence that any president said “so help me God” until September 1881, when Chester A. Arthur took the oath after the death of James Garfield. William Howard Taft, Warren G. Harding, Calvin Coolidge, and Franklin Roosevelt said “so help me God,” as has every president since then. But before 1933, we have good evidence for only four (of thirty-one). So the assertion that every president said “so Help me God” might generously be described as “unproven.”

The “every president” tradition apparently began shortly after World War II, as tensions increased between the United States and the “godless communists” of the Soviet Union. Religion became an important weapon in the Cold War. “The fate of the world rests with the clash between the atheism of Moscow and the Christian spirit throughout other parts of the world,” said Senator Joe McCarthy, and J. Edgar Hoover added, “Since Communists are anti-God, encourage your child to be active in the church.” To shore up our Godly credentials, we added “under God” to the Pledge of Allegiance and made “In God we trust” our national motto. And it was during this time that the American myth grew to include the story that all presidents, not just Washington, invoked God as part of their oath.

One of the earliest examples is from Jacob Simpson Payton, the “Washington correspondent” for the Methodist Christian Advocate. In a column from January 1948, Payton wrote that religious tolerance had been a goal of “the dream-driven champions of democracy” who had founded the American nation: “All Presidents, representing many branches of the household of faith, before entering upon their most solemn duties have placed their hands upon the open Bible, pressed their lips to its sacred pages and have sealed their solemn compact with the words, ‘So help me God.’”

Later that year, Frank C. Waldrop, editor of the Washington Times-Herald, wrote a response to the Supreme Court’s decision in McCollum v. Board of Education, in which the Court ruled that it was unconstitutional for public schools to aid in purely religious instruction. “Every President from Washington down to Harry Truman has always taken that oath [the Constitutionally-prescribed presidential oath] with his hand on the Bible, a religious book,” Waldrop wrote in response to the decision, “and more than that, every President so far as this writer can learn has also added the undeniably religious phrase, ‘So help me, God,’ as an unofficial element of his promise.”

Bruce Catton, the famous Civil War historian, solidified this “new” tradition in January 1957, just in time for Dwight Eisenhower’s second inauguration. “George Washington was a man inspired,” Catton wrote, “and his inspiration has come down to all of us, coloring the environment in which we live. . . . After reciting the formal oath, he put in a short sentence of his own: ‘So help me God.’ Every President since has added those words. They have now become part of the ritual; and it is a good part, an essential part, pledging more than was originally intended when the oath was written. . . . [Washington] spoke not only for all future Presidents, but for the rest of us too.”

An editorialist in Conductor and Brakeman, a magazine for railway workers, seemed to be channeling Catton later that year: “Every President of the United States since that time has repeated those additional words of George Washington until today it is considered a part of the Oath of Office for the President of the United States.” A speaker at the annual convention of the National Rural Letter Carriers Association, meeting in Indianapolis in August 1960, explicitly referred to Catton’s piece as he explained that the words “so help me God” “were not a part of the original oath but they are now a part of it. Every president since [Washington] has repeated these words.”

In 1962, when the Supreme Court ruled (in Engel v. Vitale) that government-directed prayer in public schools was unconstitutional, the Senate Judiciary Committee proposed three constitutional Amendments to protect prayer in the schools. The Cold War setting for the hearings was obvious. Virginia Senator A. Willis Robertson said that, without the Amendments, “there will be no material difference between our Government and that imposed upon the Soviet Union by the Politburo.” Georgia’s Herman Talmadge said that the Court’s decision “rocked the very cornerstone of the creation of our Republic.” In a statement submitted to the Committee, Rufus Webb, an early leader of the Back-to-God movement, used the new myth to support the proposed Amendments: “Upon being sworn in as our first president, George Washington added the words, ‘So help me God.’ According to this precedent, every President since has repeated [those] solemn words.” Webb also urged the Committee to propose another Amendment that would add “so help me God” to the Constitutionally-prescribed presidential oath; the Committee took no action on that recommendation.

The tradition that every president has added “so help me God” to the Constitutionally-prescribed oath of office seems to have begun in the Cold War context of the late 1940s. I have found no record of it prior to that time. Within a dozen years, it was well on its way to becoming the commonly-held tradition. Since then, the story has appeared in textbooks and newspaper editorials; in the Congressional Record and in Supreme Court decisions; in Prologue: The Journal of the National Archives; in books by Eleanor Clift, William Bennett, William Safire, Kenneth C. Davis, Leonard Williams Levy, and dozens of others. For years, on the eve of presidential inaugurations, UPI sent to its thousands of media subscribers the words of the presidential oath followed by a sentence such as the following: “George Washington on his own initiative added the words, ‘So help me God,’ and every subsequent president has followed that tradition.”

A century after Rufus Griswold had George Washington saying “so help me God,” Bruce Catton and others made the phrase a part of every presidential oath. It joined “one nation, under God” and “In God we trust” to create a trinity of Cold War religious phrases. And like several other legacies of our Cold War heritage, this one has stuck with us.