Why It’s Time to Remember Waterloo for a Different Reason

Christine Haynes is Associate Professor of History and Director of Graduate Studies at the University of North Carolina at Charlotte. This piece is based on research for her forthcoming book, entitled “Our Friends, the Enemies”: The First Allied Occupation of France, 1815-1818 (under contract with Harvard University Press). 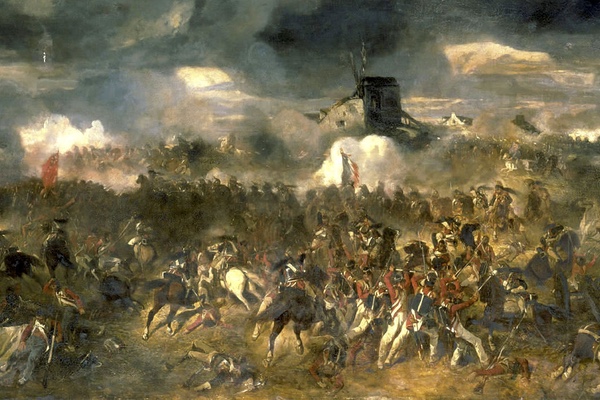 “Waterloo.” The very name has become a synonym of total defeat. Two hundred years have passed since the battle between the revived imperial army of Napoleon, on the one hand, and British as well as Prussian troops under the command of the Duke of Wellington, on the other. In the two centuries since the 18th of June 1815, Europe has seen many more, and far bloodier, conflicts. Yet the defeat of Napoleon at Waterloo remains an iconic, if divisive, event, as seen most recently in the kerfuffle over a commemorative Euro coin, produced by the Belgian mint but rejected by the French government.

But this memory of Waterloo as first and foremost the defeat of Napoleon overlooks the battle’s most important legacy. Contrary to the way it is described in most history books, the Battle of Waterloo did not mark the end of the first “total war,” as the revolutionary and Napoleonic Wars have been termed. Rather, it was just the beginning of a long and complex transition to peace. This peace was forged less in Vienna, where the Congress of that name was already concluding its work, than in Paris, in the context of a military occupation. Ending over two decades of continent- (really, world-) wide war, this peace established a foundation for “Europe” as a political entity. Aside from a handful of relatively short conflicts between individual nations, it would endure almost a century, until the outbreak of an even more total war in August of 1914.

In our focus on the downfall of Napoleon at Waterloo, we have forgotten how this peace was implemented. In the weeks following the battle outside of Brussels, the British and Prussian armies marched to Paris, where they encamped in the Bois de Boulogne and on the Champs-Elysées. By the middle of July, they were joined in France by troops from most of the rest of Europe, including Russia, Austria, Saxony, Bavaria, Württemberg, Hanover, Denmark, Piedmont, and even Spain. Totaling over a million men, these “Allies,” as they were called, occupied some two-thirds of the territory of France until well into the fall. As their leaders deliberated over a peace settlement, these troops ravaged the countryside, requisitioning, pillaging, assaulting, and raping local inhabitants.

Finally, late that fall, Allied as well as French representatives agreed upon the terms of a peace settlement. Resisting demands by Prussian and Austrian (as well as some conservative British) leaders for revenge against the nation that had supported Napoleon yet again, Russian and British leaders--above all the British foreign minister Lord Castlereagh and the Duke of Wellington himself--advocated a gentler approach to the vanquished nation of France. Arguing that heavy territorial and financial losses would only exacerbate revolutionary sentiment there, these more moderate Allies insisted that only a benevolent, multi-national settlement would ensure political stability for the French and financial indemnification of the Allies.

In a treaty signed on 20 November 1815, the Allies instituted a longer-term “occupation of guarantee” centered on eighteen garrison towns along the north-eastern border. Projected to last five years, this occupation involved 150,000 troops from all of the Allied powers, plus 50,000 horses, under the command of the Duke of Wellington. For these remaining troops, all food, forage, equipment, and salary was to be paid by the French, to the tune of 150 million francs per year. In addition, as a “guarantee” of political stability, the French were required to pay 700 million francs in reparations, equivalent to the government’s annual revenue at the time. Not until these reparations were paid in full—which, with the help of financing from international bankers, they were by the end of 1818—would the Allies agree to end the occupation of guarantee. This settlement, which represented a significant departure from previous conventions to restore the balance of power between warring nations, instituted in effect the first multi-national peace-keeping mission.

Ultimately lasting three years, the Allied occupation of guarantee marked a major development in the international law of war. In contrast to previous occupations for annexation or conquest, this multi-national peace-keeping mission aimed at political reconstruction and international reconciliation. Establishing clear limits on exactions and interventions by belligerents against civilians, it relied not only on military force but on “soft” diplomatic power, including a Council of Allied Ambassadors, which met regularly in Paris to oversee political developments in France and the rest of Europe. As Wellington explained this approach to Castlereagh, in a letter dated 11 August 1815: “These measures will not only give us, during the period of occupation, all the military security which could be expected from the permanent cession [of territory], but, if carried into execution in the spirit in which they are conceived, they are in themselves the bond of peace.”

In its execution, the occupation of guarantee was not without violence. In the occupied zone, foreign troops continued to subject French inhabitants to endless requisitions and “excesses,” in the form of property damage, theft, beating, brawling, murder, and rape. At the same time, however, the occupation of guarantee provided a context for reconciliation—or at least accommodation—between the French and their former enemies. Throughout the three-year occupation, there was considerable fraternization between French inhabitants and Allied troops, especially of the upper, but even from the lower, classes. There was also much cross-cultural exchange of idioms, foods, fashions, amusements and even literature, contributing to a revival of cosmopolitanism after a generation of continent-wide war.

In short, the occupation of guarantee played a major role in the reconstruction not just of France but of Europe after 25 years of revolution and war. A new approach to the age-old problem of how to end war, it succeeded not just in keeping, but in making, peace between the French and their former enemies. However, in comparison to the numerous, more punitive occupations that succeeded it, beginning a half-century later in the American South after the Civil War and in France, again, after the Franco-Prussian War, the occupation of 1815-1818 has been largely forgotten. On the occasion of the bicentennial of the Battle of Waterloo, at a moment when the idea of “Europe” is under siege, it is worth recalling the story of how earlier Allies implemented, through multi-national cooperation, a long-lasting, continent-wide peace. This battle deserves to be celebrated not as the end of the first “total war,” but as the beginning of a “total peace,” which following two more world-wide conflicts, came to fruition after 1945 but is facing new challenges today.