James Robenalt is the author of The Harding Affair, Love and Espionage During the Great War (Macmillan 2009), and his latest, January 1973, Watergate, Roe v. Wade, Vietnam, and the Month that Changed America Forever (Chicago Review Press 2015). He practices law in Cleveland, Ohio. 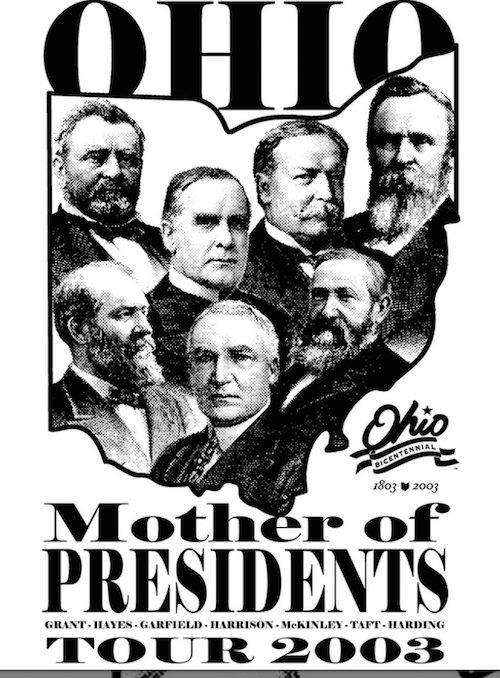 I am from Ohio and I have written extensively on Warren Harding, the last president from Ohio and the first president to honor Alaska (then a territory) with a presidential visit in the summer of 1923.  So strenuous a trip was Harding’s amazing journey by train--he trekked all the way to Fairbanks to drive the golden spike on the Alaska Railway—that he overtaxed his already failing heart and died in San Francisco at the Palace Hotel on August 2, 1923.  He was sincerely mourned by a nation that had grown to love him.

Harding deeply admired fellow Ohioan William McKinley.  Like McKinley, Harding ran for president from his front porch, bringing the world and celebrities to his simple hometown in the middle of Ohio.  By the time Harding ran in 1920 (against another Ohioan, Democrat James M. Cox, Ohio’s governor, who chose a young and still ambulatory Franklin D. Roosevelt as his VP candidate), Ohio had become known as the “mother of presidents.”

Since the end of the Civil War half a century earlier, men born in Ohio had ruled the presidency. Their number as presidents show the domination: Grant (18th), Hayes (19th), Garfield (20th), Benjamin Harrison (23rd), McKinley (25th), Taft (27th), and Harding (29th).  William Henry Harrison, who is claimed by Virginia, moved to Ohio and is sometimes included in the list of Ohio presidents.

I argue that these presidents deserve much more credit than they have been given.  I do not share Karl Rove’s politics, but I fully agree with him that McKinley was a transformational president (Rove is coming out with a biography on McKinley).  By way of further disclosure, my great-grandfather ran Democrat William Jennings Bryan’s campaign in Ohio against Governor McKinley in 1896 (Bryan almost defeated him).  So I was not naturally drawn to these Ohio presidents, all of whom were Republicans.

But my study of Harding changed my (highly uninformed) view.  I have written recently that Harding’s presidency had significant achievements, all of which have been unfairly overrun by the specter of scandal (mostly related to his marital infidelities).  Harding cut taxes after the war, balanced the budget, created the first Bureau of the Budget (today the OMB), oversaw the first world arms’ limitation treaty, pardoned Socialist and labor leader Eugene Debs and  hundreds of other political prisoners, and he gave a brave Civil Rights speech in Birmingham, Alabama in 1921, at the height of racial intolerance. While he was not calling for social equality (neither did Lincoln), he did insist on political equality—a radical position for any national politician of the time.

What I have since seen is that Ohio presidents occupied a unique and powerful position in the formation and building of this country.  If Virginia boasts the “Founding Fathers” (a term attributed to Warren Harding), Ohio can say its presidents were the “Saving Fathers.”

Most were Civil War generals, who fought for the Union. Even McKinley was a young sergeant in the Army who served heroically in battles like Antietam.  And who but Ulysses Grant could have held the fractured nation in tact after such a bitter civil war.  As Jay Winik points out in his book April 1865, most civil wars in history have devolved into horrific guerilla wars.  Ours did not.  Grant in the White House assured that wouldn’t happen in the United States.

These Ohio presidents not only saved the nation, they stitched it back together.  Hayes ended the federal occupation of the South, starting the admittedly difficult process of re-assimilation (which would include the rise of Jim Crow policies), but he probably saved the country.

McKinley then took the nation to world power.  And he brought us Theodore Roosevelt, who succeeded him when he was assassinated in 1901.

Taft continued TR’s trust busting policies and was one of the most important advocates for the independence of the judiciary.  He was the only person ever to serve as president and Chief Justice of the United States.

Harding calmed a troubled nation and world.  He provided stability when the world was in tatters.

These are not inconsequential presidents.  And they deserve respect.  I have been advocating for some time the creation of an Ohio Presidential Center, to study the presidency and to re-evaluate the Ohio presidents in particular.  Presidential libraries started with FDR and the law only provides for libraries supported by the National Archives back to President Hoover, FDR’s predecessor.

All this said, I believe it is the right move to return the name of the great mountain in Alaska to Alaskans.  Denali is a beautiful name and sentiment.  I suspect that President McKinley would humbly agree, as I am sure Harding would.  Harding went to Alaska to pay homage to the people living there and to rejoice in their heritage.  He also spoke out in favor of the protection of Alaska and its irreplaceable natural beauty and resources.

My only problem with the way this was handled was that it seemed as if Ohioans and their presidents were once again being disrespected.  How much better it would have been for a ceremony at the Ohio Presidential Center in which Ohioans and Alaskans could meet to celebrate their mutual affection, with Ohioans generously returning the naming rights to the people who have lived in Alaska since time out of mind.

Warren Harding would have smiled.