Islamophobia Is an American Tradition

Karine Walther is an Assistant Professor of History at the Georgetown University School of Foreign Service in Qatar.  Her book, Sacred Interests: The United States and the Islamic World, 1821-1921 traces the impact of American Islamophobia on American foreign relations in the long nineteenth century. 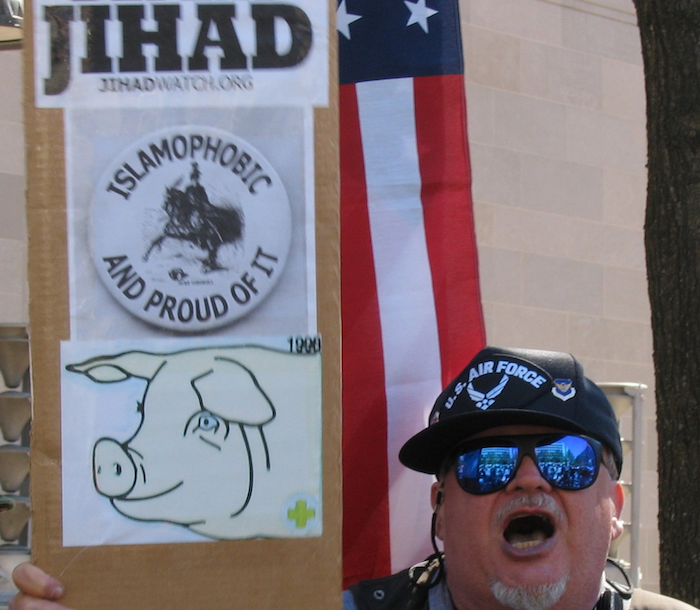 "Gathering of eagles" by The original uploader was Raphael1 at English Wikipedia(Original text: City of Anthrax) - Transferred from en.wikipedia to Commons.(Original text: http://dc.indymedia.org/media/all/display/34555/index.php?limit_start=45). Licensed under Public Domain via Commons.

When Republic presidential candidate Ben Carson made news recently by questioning whether a Muslim American could (or should) ever become president of the United States, his assertions recalled similar concerns raised by a political supporter of John McCain’s presidency at a rally seven years earlier. “I can’t trust Obama,” Gayle Quinnell told McCain, “I’ve read about him…and he’s an Arab.” Whether she meant Arab or Muslim, two identities often conflated in American understandings of Muslims, her fears revealed deeper concerns by some segments of the American public about the loyalty of Muslim Americans to the United States. McCain’s response was equally revealing. He did not challenge the idea that Arab Americans or Muslim Americans could and should be trusted to occupy the highest office of the land, but instead, he defended Obama against the “accusation” of being Arab. Obama was not an Arab, he responded, “he’s a decent family man, citizen” as if being an Arab or Muslim American prohibited decency or ties to family – or even American citizenship.

As Carson’s more recent statements have revealed, public expressions of hostility and distrust towards Muslim Americans have only become more prominent and normalized in American public discourse. This rise in public expressions of Islamophobia have undoubtedly been fueled by American governmental policies of targeted surveillance of American Muslim communities that emerged after 9/11 and have resulted in dire repercussions that move beyond just public discourse, including a dramatic rise in discrimination and hate crimes against people perceived to be Muslim or Arab.

But it would be a mistake to assume that such sentiments are a recent phenomenon that emerged only after 9/11. Islamophobia has a long history in the United States that can be traced back as early as the colonial era when European settlers carried their antagonism to the Islamic faith with them to the New World.  Debates over the ratification of the U.S. Constitution included discussions over whether Muslims and other non-Protestants should ever be able to assume political office. Indeed, as scholars have demonstrated, anti-Federalists used the specter of a Muslim, Catholic or Jewish-American becoming president to unsuccessfully argue for religious tests in the U.S. Constitution.  Despite failing on the national level, religious tests banning non-Protestants from occupying political offices were integrated into several state constitutions. In this regard, American Islamophobia must also be understood alongside historical expressions of anti-Semitism, anti-Mormonism and anti-Catholicism. Of course, over the course of American history, fears of disloyalty have also extended to other minorities deemed potential fifth columns in American society. The internment of Japanese Americans during World War II, the majority of whom were American citizens, is only one of the most telling examples.

But throughout American history, Islamophobia extended beyond just the domestic sphere.  In the nineteenth century, many Christian Americans saw themselves as a crucial leader of global Christendom. Fueled by the religious fervor of the Second Great Awakening, Christian activists saw it as their divine role to spread Christianity to the “heathens” of the world. When it came to the Islamic world, they portrayed the “Christian world” in a global battle of “cross against crescent.” Such feelings would rise to the fore when Americans witnessed revolutionary movements by Ottoman Christian subjects against Ottoman Muslim rulers. American support for revolutionary insurrections in Greece in 1821, Crete in 1866, and Bulgaria in 1876 drew the attention of thousands of Americans who rallied to their cause, based in part on their belief that such battles were part of this alleged global battle between Christianity and Islam. At these moments, Americans maintained that Muslims’ alleged religious fanaticism, political and religious decadence, and intolerance for other religions made their rule over Christian subjects, and to a lesser extent, Jewish subjects, an imperial, political and moral anomaly.  Such beliefs also pushed American to actively support the extension of European empire to lands ruled by Muslims, including the Ottoman Empire and Morocco.

Although it would be a mistake to trace an unbroken trajectory from the nineteenth century to the post–Cold War period and, more importantly, to the post-9/11 era, it would be equally erroneous to discount the ways in which hostility towards Islam and Muslims has persisted, albeit in varied forms. Indeed, American Islamophobia never fully vanished; it reappeared with force during the ideological and foreign policy vacuum that emerged after the Cold War. Whereas some political scientists advanced the notion that the end of the Cold War had brought about the “end of history” and the ideological victory of liberal, secular democracies, the late Samuel Huntington theorized an alternative vision of the world in his 1993 essay, “The Clash of Civilizations,” which he later expanded into a full-length book. According to Huntington, a simplistically defined “Islamic Civilization” would play a central role in a global “clash” against an equally simplistic construction of the “West,” broadly understood as Euro-American civilization. His theory resonated with many Americans not because it was accurate but because this particular kind of discourse has a long history of shaping how Americans identified itself against the Islamic world.

Huntington’s arguments appeared particularly prophetic after the events of 9/11. As President Bush noted days after the 9/11 attacks, “the American people are beginning to understand. This crusade, this war on terrorism is going to take a while.” Less than a decade after the publication of Huntington’s influential article, the Bush administration’s “Global War on Terror” borrowed heavily from such theories to explain its emerging ideological conceptualizations.

Simplistic understandings of Islam and Muslims would help drive the actions of American policymakers and military officers during post-9/11 engagements in the Middle East. During and after the 2003 war in Iraq, military rulers and policymakers at the highest levels relied on the book, The Arab Mind, a widely discredited study by Raphael Patai originally published in 1983. The book purported to explain the shared (and identical) “mentality” of Arabs in the diverse areas of the world, noting that people in the West did not realize how much Arabs hated them. Patai’s book helped convince neoconservative policymakers in Washington “that Arabs only understand force.” The book became “required reading” for many soldiers and officers on their way to Iraq. As a journalist for the New York Times noted in 2003, such beliefs were publicly expressed by American military officers: “‘You have to understand the Arab mind,’ Captain Todd Brown, a company commander with the Fourth Infantry Division, said as he stood outside the gates of Abu Hishma. ‘The only thing they understand is force—force, pride and saving face.’”

The repercussions of such dehumanizing beliefs about Muslims on American policies at home and abroad appear obvious, particularly after the release in December 2014 of the Senate Intelligence Committee’s report on the use of torture by American CIA agents between 2001 and 2006. Such policies reveal a continued and unfortunate practice of simplifying the identities of peoples around the world who happen to be Arab or Muslim, often with brutal consequences. As these most recent examples demonstrate, American Islamophobia remains a powerful force in shaping domestic and foreign policies that impact the lives of Muslims in the United States and abroad. Far from a recent phenomenon, however, such attitudes are deeply grounded in American history.