This Is What Heroism Looked Like in World War II

Gregory Sumner is a Professor of History at the University of Detroit Mercy. This is adapted from his new book "Detroit in World War II," published by The History Press in November 2015. 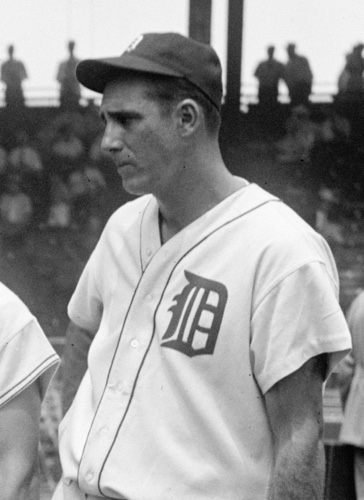 Veterans Day this 70th anniversary of the end of World War II invites us to pause and reflect on the stories of those who fought, at home and abroad, to leave us a better world. The example set by baseball Hall of Famer Hank Greenberg stands with the best of them.

Like other major league franchises the Detroit Tigers played their games uninterrupted during the war, in the spirit of President Roosevelt’s declaration that the national pastime was too important to morale to be suspended. According to the 1940 WPA Guide to Michigan the Tigers by then commanded “the most loyal following of any team.”

The three daily newspapers carry column after column of baseball news, not simply in the sport sections, but in front page streamer headlines when a momentous event occurs, such as Hank Greenberg’s spraining his wrist.

With his towering home runs “Hammerin’ Hank” was Detroit’s answer to Babe Ruth, and the prospect of seeing him step into the batter’s box disturbed the sleep of every pitcher he faced during his long career. Greenberg led his team to a world championship in 1935, and was twice voted the American League’s Most Valuable Player. Teammates and opponents alike respected him for his professionalism and sportsmanship, on and off the field. 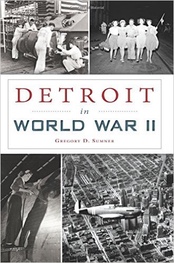 Hank was a folk hero to all Tiger fans, but he had special resonance for members of Detroit’s large Jewish community. Born Hyman Greenberg in the Bronx to Orthodox parents from Rumania, he grew up observing his religion without apology or self-consciousness, and he continued the practice as a big-leaguer, declining to take the field on Yom Kippur and other high holidays. This was a conspicuous act in the city of Ford, Lindbergh and Father Charles Coughlin, local figures notorious for their anti-Semitic pronouncements.

Greenberg never courted the role of champion of his faith, but he came to understand that it came with his celebrity in that historical moment—with a drumbeat of news reports of burning synagogues and smashed shop windows in Nazi Germany. Like Detroit’s “Brown Bomber” Joe Louis, who felt the weight of an entire race on his shoulders every time he stepped into the boxing ring, so Hank dealt with pressures that went far beyond his sport. Under the circumstances he handled himself with dignity and grace, letting his bat and glove do the talking while doing his best to ignore the provocations that came his way in every ballpark. “I was always in the spotlight,” he remembered later.

I was there every day, and if I had a bad day, every son-of-a-bitch was calling me names. I had to make good. I came to feel that if I, a Jew, hit a home run, I was hitting one against Hitler.

Detroit made it back to the World Series in 1940, losing to Cincinnati. By spring training the next year many of the team’s established players had departed for the military, including its slugging superstar. Again like Joe Louis, Greenberg took a big pay cut when he enlisted in the Army—going from an annual salary of $50,000 (tops in the majors) to a check for $21 a month. Discharged briefly in 1941, he went back into the Air Corps right after Pearl Harbor. Hank brushed aside questions about his sacrifice. “We are in trouble,” he explained to a reporter, “and there is only one thing for me to do—return to the service. This doubtless means that I am finished with baseball, and it would be silly of me to say I do not leave it without a pang. But all of us are confronted with a terrible task—the defense of our country and the fight for our lives.”

With many of the best athletes gone—among them the Yankees’ Joe DiMaggio and Ted Williams of the Red Sox — the quality of the game between the lines inevitably suffered. A Time correspondent spoke of big-league rosters “as full of unknown names as Y.M.C.A. registers.” At Detroit’s Briggs Stadium the play, it is fair to say, was as watered down as the beer. But billboards for war bonds, the presentation of colors and uniformed soldiers and sailors sitting in the bleachers reminded fans of the reasons for the austerity, and they were content to make the best of it.

Play-by-play broadcasters avoided mention of weather conditions during the war, out of concern that unfriendly ears might be listening in. Print journalists were advised to tone down the hyperbole usually associated with sports. The Associated Press circulated a memo to its correspondents on the baseball beat, reminding them to keep the games they covered in perspective. “There should be a ban on flowery, overenthusiastic, lyrical sports writing for the duration,” it insisted. “Remembering the exploits of military heroes, it does not seem appropriate to overdo the use of such words as ‘courageous,’ ‘gallant,’ ‘fighting.’ It doesn’t take much ‘courage’ to overcome a two-run lead in the ninth.”

Hank Greenberg would be away from the game he loved for forty-seven months—the longest absence of any major leaguer during the war. He came back from the China-India-Burma theatre in the summer of 1945, with a record of harrowing experiences and four Battle Stars adorning his chest.

Like millions of others Captain Greenberg returned to his old civilian job—older, slower and more injury-prone than before, perhaps, but with his determination and pride intact. He helped the Tigers stay in the pennant race, and came through in dramatic fashion in the last game of the season, smashing a grand slam in the ninth inning in St. Louis to propel the Tigers into another fall classic (where they beat the Chicago Cubs in seven). In so doing Hank silenced critics those who said he was “finished” as a ballplayer, and no doubt inspired other veterans as they made their way back from the war.