Jack Jenkins is the Senior Religion Reporter for ThinkProgress. He was previously the Senior Writer and Researcher for the Faith and Progressive Policy Initiative at the Center for American Progress, and worked as a reporter and blogger for the Religion News Service. 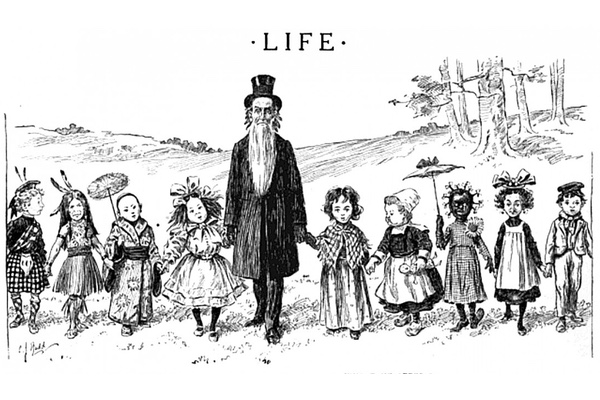 ... When former Massachusetts governor and devout Mormon Mitt Romney announced his campaign for president in 2012, political pundits were quick to note his most visibly apparent feature: his blinding whiteness. Tumblr blogs showcased the candidate’s popularity with white people, songs declared him “the whitest white man in the USA,” and cultural commentator Lee Siegel, writing for the New York Times, crowned Romney as the “whitest white man to run for president in recent memory.” In almost every case, his faith was listed as a chief indicator of his extreme Caucasian-ness.

“…there is no stronger bastion of pre-civil-rights-America whiteness than the Church of Jesus Christ of Latter-day Saints,” Siegel wrote. “Yes, since 1978 the church has allowed blacks to become priests. But Mormonism is still imagined by its adherents as a religion founded by whites, for whites, rooted in a millenarian vision of an America destined to fulfill a white God's plans for earth.”

Outsiders suggested that Mormons were physically different and racially more similar to marginalized groups than they were to white people.

Indeed, Mormonism, now largely consolidated within the Church of Jesus Christ of Latter-day Saints (LDS), was founded in the United States by white American Joseph Smith. And while the church has diversified as it spreads globally, its historically white American adherents also remain overwhelmingly white to this day, so much so that the modern church now runs a campaign designed to counter the idea that its U.S. pews lack diversity.

But if Siegel had opened up the April 1904 edition of LIFE magazine, he would likely be surprised to find a bizarre political cartoon of a character designated as “Mormon Elder-Berry.” The image depicted a distinctly white Mormon man holding hands with nine children drawn to represent racial stereotypes, collectively described in the caption below as “his six-year-olds, who take after their mothers.”

Taken out of context, the characterization seems odd, if not downright confusing, to modern eyes. But as University of Utah Associate Professor of History W. Paul Reeve writes in his book Religion of a Different Color: Race and the Mormon Struggle for Whiteness, the cartoon was intended to affiliate Mormons with a number of groups deemed “non-white” during the 19th and early 20th centuries — implying that Mormons themselves were not, in fact, white.

“Outsiders suggested that Mormons were physically different and racially more similar to marginalized groups than they were to white people,” Reeve writes. “Mormons were conflated with nearly every other ‘problem’ group in the nineteenth century — blacks, Indians, immigrants, and Chinese — a way to color them less white by association.” ...