Once in the Shadows, Europe’s Neo-Fascists Are Re-emerging 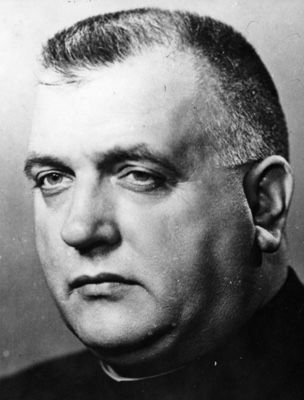 President of the First Slovak Republic

Head bowed in reverence, Robert Svec gently placed a bouquet of blood-red flowers at the foot of the only known statue of Jozef Tiso, Slovakia’s wartime fascist leader, in a weedy monument park known as the Pantheon of Slovak Historical Figures.

For years, Mr. Svec’s neo-fascist cultural organization, the Slovak Revival Movement, was a tiny fringe group. But now his crowds are growing, as 200 people recently gathered with him to celebrate the country’s fascist past and call fascist-era greetings — “Na Straz!” or “On the guard!” Mr. Svec is so emboldened that he is transforming his movement into a political party, with plans to run for Parliament.

“You are ours, and we will forever be yours,” Mr. Svec said at the foot of the statue, having declared this as the Year of Jozef Tiso, dedicated to rehabilitating the image of the former priest and Nazi collaborator, who was hanged as a war criminal in 1947.

Once in the shadows, Europe’s neo-fascists are stepping back out, more than three-quarters of a century after Nazi boots stormed through Central Europe, and two decades since a neo-Nazi resurgence of skinheads and white supremacists unsettled the transition to democracy. In Slovakia, neo-fascists are winning regional offices and taking seats in the multiparty Parliament they hope to replace with strongman rule.